Pope Benedict's general prayer intention for August is: "That public opinion may be more aware of the problems of millions of displaced persons and refugees, and that concrete solutions may be found for their often tragic situation". His mission intention is: "That those Christians who are discriminated against and persecuted in many countries because of the name of Christ may have their human rights, equality and religious freedom recognised, in order to be able to live and profess their own faith freely".(SOURCE: VIS 090731 (100)

The Pope will release an album with Marian prayers. The album by Geffen/Universal will in clude classical music. The Choir of the Philharmonic Academy of Rome will be featured, recorded in St. Peter's Basilica in the Vatican. Also the original compositions are performed by the Royal Philharmonic Orchestra, recorded at London's Abbey Road studios. The Multimedia San Paolo, an Italian Catholic media group is involved with this album. Funds raised will go to support the education of poor children. Nov. 30 is the release date for the album. The Pope will be featured singing litanies and chants, and saying prayers in Latin, Italian, Portuguese, French and German.

The Holy Father accepted the resignation from the office of auxiliary of the archdiocese of Birmingham, England, presented by Bishop Philip Pargeter, upon having reached the age limit. (SOURCE:VIS 090731 (40)

CNA reports that a British girl who fought last Fall for her ‘right to die,’ has changed her mind and chosen to continue her treatments, including a heart transplant.
In November 2008, Hannah Jones (14 years old) made headlines when medics took th

e then 13-year old girl to court after she refused a heart transplant, which was weakened by her treatment for leukemia. It was a decision her parents supported.
“Obviously we want to have Hannah with us as long as possible, but we are not going to force her to do something that she doesn’t want to do at this time,” her father, Andrew Jones told The Daily Mail.
Hannah explained that her treatments were getting to be too exhausting and difficult. “I don’t like to be like this but I live with it,” she said.
In response to her refusal, administrators at the Herefordshire Primary Care Trust in Hereford, England decided to seek temporary custody of the child in order to “force” her to undergo the surgery. However, after several court hearings and a report from a child protection officer, the hospital withdrew its legal action.
Pro-euthanasia groups praised the girl, while pro-life groups charged that the teen was being manipulated by “death with dignity” rhetoric.
When a heart became available, she was transferred to London and underwent a six-and-a-half-hour surgery. Jones’ operation was a success, but she is still recuperating in intensive care.(Edited from: http://www.catholicnewsagency.com/new.php?n=16716 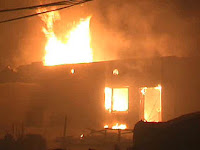 UCAN reports that the Christian village of Korian in Punjab province on July 31 after it was completely destroyed in a violent raid the previous night by thousands of Muslims.

A Christian house set ablaze by Muslims
Korian was home to about 100 Christian families, most of them laborers, who all fled the area in the wake of the attack. No one died in the incident.
The village in Faisalabad diocese was attacked after Muslims accused a family there of blasphemy. In all, 60 houses and two churches belonging to the Church of Pakistan and the New Apostolic Church were destroyed and livestock stolen.
"They have left nothing. My horse, my only source of income, has also been taken," said Shubaan Masih, a local Christian.
The mob also blockaded the road leading to the village for several hours refusing entry to police or firefighters.
"They used trucks to break the walls and petrol to start the fires," he said. "We saved our lives only by hiding in the fields until three in the morning, when relatives arrived with vehicles to collect us. The children cried all night," Masih said.
Tension between the Christian and Muslim communities in the area arose after pages containing Islamic inscriptions were found in front of a Christian home on July 26 following a wedding.
A group of Muslims then interrogated those who attended the wedding party, and accused the family of desecrating the Qur'an. The family says it has no knowledge of the offence but nevertheless apologized on July 30, saying that children who did not know what they were doing could have been responsible.
Local Muslims have filed charges against the family according to the country's blasphemy laws. They are accusing the family of blasphemy against Prophet Muhammad, which carries a mandatory death sentence in Pakistan. They also accuse the family of blasphemy against the Qur'an, which is punishable with life imprisonment.

"One cannot but weep upon seeing the trail of destruction left behind," said Father Aftab James Paul, director of Faisalabad diocese's Commission for Interfaith Dialogue.
"It is yet another example of a feud being given a religious color. We shall visit the police station and demand the arrest of the instigators of this terrorism," he said. (Edited from:
http://www.ucanews.com/2009/07/31/christians-flee-after-muslims-destroy-village/


CISA reports that the Catholic Church has condemned a militant Muslim sect whose confrontation with security forces this week caused deaths and destruction. Calm has reportedly returned to the affected region after a heavy military crackdown in which several members of the Boko Haram movement, including the leader Mohammed Yusuf, were killed.A statement signed by Fr Louis Odudu, Deputy Secretary-General of the Catholic Secretariat of Nigeria, reminded Boko Haram of the need for tolerance.“We, therefore, call on the leaders of the Boko Haram movement (translated as Western education is sin), currently causing hardship for innocent ordinary citizens in the northern parts of the country, to adopt a creative approach to their religious practice in order to give honour and glory to Almighty God.”The church said that the underlying pillars of any religion include the principles of justice and progress; tolerance and the dignity of all human beings.“Modern education and modern civilizations do not preclude ardent religious devotion. In fact, it should be underlined that Islam, as a religious practice, from places like Al-Azhar, carried the light of learning through so many centuries and paved the way for Europe’s renaissance and enlightenment.”Muslim communities have contributed to the development of the order of algebra, magnetic compass and tools for navigation, the mastery of pens and printing, mastery of the knowledge of diseases and healing technologies, timeless poetry and cherished music, and calligraphy, the church stated.“We therefore condemn any religious movement that would subvert the progress that has been made in education and technology in Nigeria and at the same time thwart law and order. We condemn a descent to religious fanaticism that would destroy our national peace and stability.”The church also accused Nigerian government of condoning the growth of the Boko Haram movement and called for urgent efforts to control the upsurge of religious militancy in the country. The government should also ensure that the perpetrators of the violence face the full weight of the law.The church attributed the cause of the Boko Haram uprising and other forms of violence to widespread poverty and urged the government to urgently address the problem. (Edited from http://www.cisanewsafrica.org/story.asp?ID=4054


The USCCB reports that Cardinal Justin Rigali, Chairman of the U.S. Catholic bishops’ Committee on Pro-Life Activities, wrote on July 29 to the members of the House Energy and Commerce Committee urging them to amend “America’s Affordable Health Choices Act” (H.R. 3200) to retain longstanding government policies on abortion and conscience rights.Cardinal Rigali reiterated criteria for “genuine health care reform” set forth by Bishop William Murphy, Chairman of the bishops’ Committee on Domestic Policy, in his letter to Congress on July 17. He described health care as “a basic right belonging to all human beings, from conception to natural death” and said that “the United States Conference of Catholic Bishops is working to ensure that needed health reform is not undermined by abandoning longstanding and widely supported policies against abortion funding and mandates and in favor of conscience protection.”

CathNews Australia reports that human rights campaigner Fr Frank Brennan has rejected the former Treasurer Peter Costello's assertions that the national human rights charter would in effect curtail religious conscience or practice.
"As a Catholic priest who abhors trendy laws aimed at curtailing religious conscience or peaceful religious practice, I beg to differ," Fr Brennan .
Fr Brennan suggests the "misunderstanting" that has arisen in Victoria, surrounding its human rights charter, could be due to a number of reasons.
"First, the over broad religious vilification law. Passed before the Victorian Charter of Human Rights and Responsibilities was enacted, it would be unlikely to pass muster under that charter," he wrote.
"Second, the compulsory referral clause in last year's abortion law, which would never be judged compatible with the charter had the politicians bothered to seek and table a statement of compatibility, as the charter requires.
"Third, the 30 year review of exemptions (including those for religious schools) from discrimination laws, a timely review whether or not there was a charter.
"The Victorian charter has not caused any of these problems, uncertainties or disputes for religious Victorians. Its application might even help to protect the right to freedom of thought, conscience, religion and belief, which is included in the charter." (Edited from: http://www.cathnews.com/article.aspx?aeid=15489

Youngest son of Don Beltrán Yañez de Oñez y Loyola and Marina Saenz de Lieona y Balda ), b. in 1491 at the castle of Loyola above Azpeitia in Guipuscoa; d. at Rome, 31 July, 1556. The saint was baptized Inigo, after St. Enecus (Innicus): the name Ignatius was assumed in later years. In 1521, while in the army, a cannon ball, passing between Ignatius' legs, tore open the left calf. and broke the right shin. During his convalencense, "he saw clearly the image of Our Lady with the Holy Child Jesus". He made a general confession at the famous sanctuary of Montserrat; his sword and dagger he suspended at Our Lady's altar, and passed the night watching before them. In 1537, he founded "The Company of Jesus", "Societas Jesu" or Jesuits.

On the question of relating to our fellowman - our neighbor’s spiritual need transcends every commandment. Everything else we do is a means to an end. But love is an end already, since God is love. St. Edith Stein

TODAY'S GOSPEL
Matthew 13: 54 - 58
and coming to his own country he taught them in their synagogue, so that they were astonished, and said, "Where did this man get this wisdom and these mighty works?
Is not this the carpenter's son? Is not his mother called Mary? And are not his brothers James and Joseph and Simon and Judas?
And are not all his sisters with us? Where then did this man get all this?"
And they took offense at him. But Jesus said to them, "A prophet is not without honor except in his own country and in his own house."
And he did not do many mighty works there, because of their unbelief.
Posted by Jesus Caritas Est at 9:28 PM