CATHOLIC NEWS: JULY 30: HEADLINES
POPE RETURNS TO CASTELGANDOLFO VATICAN CITY
AFRICA: KENYA: CATHOLIC MISSION WORKER KILLED
AMERICA: USA: 7 YEAR OLD STEALS CAR TO AVOID CHURCH
EUROPE: DUTCH NUN DIES: SERVED POOR IN INDIA FOR 50 YEARS
ASIA: INDIA: PRIEST FOUND DEAD ON ROAD
AUSTRALIA: NEW VIDEO: FOR NATIONAL VOCATIONS WEEK
POPE RETURNS TO CASTELGANDOLFO VATICAN CITY
VIS reports that Benedict XVI's two-week holiday at Les Combes came to an end yesterday with a ceremony held at midday in which he bid farewell to the police, fire service and Italian civil protection for their help and vigilance during his stay. "You have been like angels", the Pope told them. "Angels are invisible but also efficient. So you too have been. You were invisible to me, but always efficient". "Unfortunately", he joked, "my own guardian angel did not prevent my accident. ... Perhaps the Lord wished to teach me greater patience and humility, to give me more time for prayer and meditation". In the afternoon, having bid farewell to Bishop Giuseppe Anfossi of Aosta and the local and regional authorities, the Holy Father travelled by helicopter to the northern Italian city of Turin where he boarded his flight for Rome. Having landed at Rome's Ciampino airport, he continued his journey by car to his summer residence of Castelgandolfo. (With files from:VIS 090730 (180)
(Pictures from http://www.radiovaticana.org/en1/index.asp)
LATEST PICTURES FROM POPES VACATION:

*
*
*
*
*
*
*
AFRICA
KENYA: CATHOLIC MISSION WORKER KILLED
CISA reports that a driver and mechanic working for a Catholic parish in North Eastern Kenya was shot dead by suspected Merile raiders from Ethiopia on Friday.Lucas Baraza who worked for Our Lady Queen of Peace Todonyang Mission was repairing the mission wind-pump at Lake Turkana when raiders hiding in the reeds shot him on the head, killing him on the spot, Catholic Radio Akicha reported.The killing has raised tension among people in the area, many of who have been camping in the church compound for more than three months fearing attacks. According to Radio Akicha, the killing of Baraza could cause workers at the mission to leave due to insecurity.Since December 2008, at least 54 people, mostly Turkana, have been killed by suspected Merile raiders.
(Edited from: http://www.cisanewsafrica.org/story.asp?ID=4048)
AMERICA

CNN reports that a 7-year-old boy from Utah tried to avoid going to church on Sunday by stealing his parents car. Authorities were called after the boy ran a stop sign and nearly hit another motorist. Sheriffs deputies caught up to the car and attempted to block it, but the 7-year-old driver turned down another street."Instead of stopping the car, this white Intrepid turned down another street."Deputies say the boy pulled into Fremont High School, where he drove around the parking lot a bit before getting back onto 4700 West. The boy finally drove home, parked in the driveway and ran inside to hide. The boy's father approached his son at home and asked him what happened. The boy admitted that he stole the car for a joy ride.Anderson said when the boy's father later confronted him, the boy said he did not want to go to church. Weber County said the boy is too young to prosecute and no charges will be filed.
(Edited from: http://www.fox13now.com/news/kstu-boy-takes-car-goes-for-joyride-avoid-churc,0,5535387.story 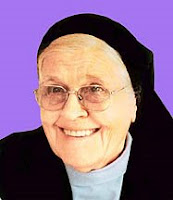 EUROPE
DUTCH NUN DIES: SERVED POOR IN INDIA FOR 50 YEARS
UCAN reports that Sister Baptista Simons, who founded an indigenous Religious congregation that works among the destitute, died on July 28 at Uden in the Netherlands at the age of 91. The elderly nun, whom local people here fondly called "Mamma", had been ill for some years.
Bishop Chacko Thottumarickal of Indore said that Sister Simons had "done marvelous work, particularly for the poor and aged" from her base in Indore, the commercial capital of Madhya Pradesh state.
The prelate told UCA News the deceased nun had provided houses at nominal cost to the homeless from all religions. "Her concern for leprosy patients is evident" from three colonies she set up for them.
Sister Johanni Ekka, superior general of the Sant Joseph Sevika Sanstha (Saint Joseph servants' society), the congregation Sister Simons founded in 1965.
Sister Simons left India for her home country in 1999 due to ill health. She was born at Maasniel, a village near Roermond in the south of Holland in 1918. She joined the Sisters Servant of the Holy Spirit in 1939 and traveled to India in 1953. She first worked as a teacher at St. Raphael's School in Indore.
Soon after, she and a few other women started the "Mata Maria Samiti" (Mother Mary's forum) and in 1965, at the request of the then Indore bishop, she founded her diocesan congregation.
Sant Joseph Sevika Sanstha now has 170 members and 12 novices in four Indian states.
Deepika Pathak, a former orphan cared for by Sister Simons, says no one can replace Sister Simons. "It is very difficult for us to bear Mamma's death," said the 23-year-old woman who is now attending a master's course in nursing. "What I am today is because of her, otherwise I would have perished," she told UCA News.
Deepti Varghese, another orphan, says she is alive today because of Sister Simons. "I was suffering from heart disease and Mamma took me to Holland for major surgery when I was three," said the mother of two. 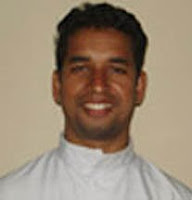 UCAN reports that a Catholic priest was found murdered in a remote area near Mangalore, southern India.

Father James Mukalel, 39
The naked body of Father James Mukalel, 39, was found on a roadside in the morning of July 30. The priest worked in Belthangady diocese, a Syro-Malabar diocese, with its headquarters near Mangalore, in Karnataka state. He was returning home from a funeral.
Father Mukalel belonged to Tellicherry archdiocese in the neighboring state of Kerala, but worked in Belthangady, serving in Kutrapady parish at the time of his death.
Some parishioners found the body on the roadside at around 7 a.m. the next day and informed the diocesan officials. Police investigations are underway.
Father Kannankal claims the priest's death is "a clear (case of) murder as his body was found far from his motorbike." He added, "The body did not bear wounds except (for) signs of suffocation."
Belthangady diocese had reported some violence against Christians in the past year and police are enquiring into them, the priest said.
(Edited from:http://www.ucanews.com/2009/07/30/priests-naked-body-found-on-roadside/

CathNews Austalia reports that a video featuring Archbishop Mark Coleridge, seminarians, Missionaries of God's Love sisters, a novice Marist brother and a married couple talking about their vocations has been produced to mark National Vocations Awareness Week.
It provides a snapshot of Catholics from the Archdiocese exploring life choices that resonate with their faith.
Archbishop Coleridge said he did not always think becoming a priest was a good idea.
"I remember thinking, what will my mates think," he said.
"Eventually it wouldn't go away so I decided to give it a go to get the monkey off my back. The secret is just to say yes to what you're being asked to do."
National Vocations Awareness Week will run from August 2 to 9.
(Edited from: http://www.cathnews.com/article.aspx?aeid=15491
TODAY'S SAINT
St. Peter Chrysologus
BISHOP
Feast Day:
July 30
Born:
406 at Imola, Italy
Died:
2 December 450 at Imola, Italy

He was baptised, educated, and ordained deacon by Cornelius, Bishop of Imola, and was elevated to the Bishopric of Ravenna in 433.
(With files from: http://www.ewtn.com/saintsHoly/saints/P/stpeterchrysologus.asp
SAINTLY QUOTE
Love tends to union with the object loved. Now Jesus Christ loves a soul that is in a state of grace with an immense love; He ardently desires to unite Himself with it. This is what Holy Communion does. St. Alphonsus Liguori
TODAY'S GOSPEL
Matthew 8: 23 - 27
And when he got into the boat, his disciples followed him.
And behold, there arose a great storm on the sea, so that the boat was being swamped by the waves; but he was asleep.
And they went and woke him, saying, "Save, Lord; we are perishing."
And he said to them, "Why are you afraid, O men of little faith?" Then he rose and rebuked the winds and the sea; and there was a great calm.
And the men marveled, saying, "What sort of man is this, that even winds and sea obey him?"
Posted by Jesus Caritas Est at 8:01 PM