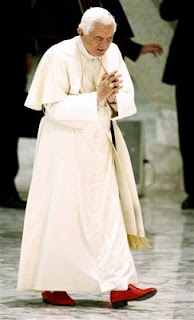 VATICAN: POPE: SPEAKS ON MARGARET D'OINGT AND ASKS FOR PRAYERS

eath by stoning earlier this year for 'adultery', may be hanged tomorrow, the British Foreign Office has learnt. Sakineh Mohammadi Ashtiani, has been held on death row in Tabriz Prison, north-west Iran since 2007. Following international protests, in July the Iranian embassy in London announced that she would not be stoned to death.Foreign Office Minister Alistair Burt MP said today: "I am deeply disturbed by suggestions that Sakineh Ashtiani could be executed imminently. The British Government has been following her case closely. We have repeatedly called for a stay of execution and a fair and transparent review of her sentence - any move to execute her would be utterly unacceptable and would be condemned widely and in the strongest terms. The world watches and waits"The death penalty has been abolished in 137 countries around the world. Argentina, Chile, and Uzbekistan outlawed the death penalty in 2008. During 2007, 24 countries, 88% in China, Iran, Pakistan, Saudi Arabia, and the United States alone, executed 1,252 people compared to 1,591 in 2006. Nearly 3,350 people were sentenced to death in 51 countries. More than 20,000 prisoners are on death row across the world.Catholic bishops in the United States, where 37 states still use capital punishment, have been calling for an end to the use of the death penalty for more than 25 years. In 2005, they invited Catholics to join them in an ongoing 'Catholic Campaign to End the Use of the Death Penalty.' They said: "Ending the death penalty would be one important step away from a culture of death and toward building a culture of life.”Human rights groups around the world are appealing for Sakineh's life to be spared. Avaaz have set up a petition urging the Iranian authorities not to execute Sakineh Mohammadi Ashtiani by any method. To add your name see: http://www.avaaz.org/en/24h_to_save_sakineh/98.php?CLICKTF
http://www.indcatholicnews.com/news.php?viewStory=17035
Posted by JesusCaritasEst at 7:24 PM 0 comments
Email This BlogThis! Share to Twitter Share to Facebook Share to Google Buzz 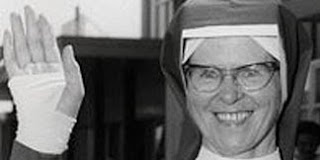 ISTER DELIA HARLEY
CATH NEWS REPORT: When Sister Bridget Harley left Australia for Ethiopia in 1967, she had already had a long career in the Daughters of Charity order and thought she was going to Africa for only four years. It was 38 years before she came home, leaving behind a mighty legacy of education in the poverty-stricken country.Delia Harley, who has died aged 91, was born on July 24, 1919, in Broxburn, near Edinburgh, the third of seven children of Owen Harley and his wife, Mary O'Donnell.In mid-1926 economic conditions in Scotland led the Harleys to emigrate to Australia and make a better life for their then five children (aged four months to 10 years). They were not ''£10 Poms'' but financially unassisted and proud to offer energy, character and courage to their new country.The family settled initially in Lithgow, where Owen worked with the state mines. With one breadwinner and an increasing number of young mouths to feed, life was hard.Then, in October 1931, things became worse when Mary died of cancer, aged 38, leaving Owen and seven children, aged 18 months to 15 years. When Mary and Owen knew that she was dying they agreed that come what may he would keep the children together. He did, with the help of daughters Josephine, 13½⁄ and Delia, 12.Delia's schooling began with the Sisters of St Joseph in Lithgow. Later she went (on a bursary) to Our Lady of Mercy College, Parramatta, and then to teachers' college at Sydney University on a scholarship. She served her bonded period at government schools in NSW before entering in 1943 the Daughters of Charity of St Vincent de Paul, an order dedicated to helping ''the poorest of the poor'', taking the name Bridget.Her first 24 years with the order were spent teaching disabled children in Melbourne, serving as directress of novices at Eastwood and, finally, teaching and providing pastoral care in the Woolloomooloo/East Sydney area from 1956 to 1966.
http://www.cathnews.com/article.aspx?aeid=24072
Posted by JesusCaritasEst at 7:23 PM 0 comments
Email This BlogThis! Share to Twitter Share to Facebook Share to Google Buzz
EUROPE: RUSSIA: 3 CHURCHES SET ON FIRE

ASIA NEWS REPORT: Three churches in Karachayevo-Cherkessia set on fire, but Muslims are being targeted too: Imam killed in Dagestan. Attem

pts to "destabilize the inter-religious peace." Moscow (AsiaNews) - The North Caucasus is till burning and this time the target of violence are religious. Attacks on Christian churches and against Muslim leaders have taken place between 1 and 2 November in different parts of the region.Local Christian leaders have been trying now not to foment tension and avoid pointing the finger at religious extremism, but the eyes of investigators and public opinion are all pointing in that direction.At dawn on Nov. 1, three fires have occurred in as many churches in the Autonomous Republic of Karachayevo-Cherkessia. According to preliminary reports, the attackers set fire to an Orthodox church in Orjonikidzevsky, almost destroyed, then continued on to another Orthodox and a Baptist church. In all cases, the buildings wee saved by the immediate intervention of pastors and faithful, who, after calling the fire department, started to put out the flames on their own.According to the spokesman for the Interior Ministry of Karachayevo-Cherkessia, Kazim Baybanov, the fires were caused by flammable materials thrown into the churches through broken windows.Christian leaders have taken steps to curb possible tensions with the Muslim community. Press and investigators immediately indicated the track of religious extremism, which infests the Russian Caucasus. According to statements by the Archbishop of Stavropol and Vladikavkaz, Feofan, there are no preconditions for talking about religious hatred in the region: "It was a well-orchestrated provocation, but we can not talk about inter-religious enmity, especially between Orthodox Christians and Muslims." "We can not blame Muslims, we can not judge people by individual incidents. Even policemen and muftis are killed and the attack has the same matrix: the intention is to destabilize inter-religious harmony, but they will not succeed", added the Orthodox bishop.Almost to prove his words, news of the assassination of the imam of a mosque in Khasavyurt, in the Republic of Dagestan, with a gunshot to the head, authorities are investigating.
http://www.asianews.it/news-en/Attack-on-Christians-in-Russian-Caucasus-19889.html
Posted by JesusCaritasEst at 7:20 PM 0 comments
Email This BlogThis! Share to Twitter Share to Facebook Share to Google Buzz

AMERICA: USA: INERRELIGIOUS FAITH ENCOUNTER ON NOV. 19 IN JP II CENTER
USCCB REPORT:Religious Leaders, Youth to Meet in ‘Generations of Faith’ Interreligious EncounterWASHINGTON (November 2, 2010) — Religious leaders and young adults from Catholic, Buddhist, Hindu, Jewish, Muslim and Sikh traditions will meet for a day of dialogue and interreligious exchange at the John Paul II Cultural Center, November 19, at “Generations of Faith—an Interreligious Encounter.” The day will feature intergenerational dialogue in a variety of formats and concludes with a reception and presentation at 6 p.m. at the John Paul II Cultural Center. The evening event is open to the public and members of the media.Religious leaders participating in the event will include Archbishop Felix Machado of Visai, India, and former undersecretary of the Pontifical Council for Interreligious Dialogue; Bishop Tod Brown of Orange, California; Anuttama Dasa, International Center for Krishna Consciousness, Hindu; Dr. Manohar Singh Grewal, past president, World Sikh Council, American Region; Rev. Dr. Ohun Chung Lee, Won Buddhist International; Dr. Sayyid Syeed, Islamic Society of North America; and Rabbi Jeffrey Wohlberg, senior rabbi emeritus, Congregation Adas Israel.The event is being co-sponsored by the Secretariat for Ecumenical and Interreligious Affairs of the United States Conference of Catholic Bishops (USCCB) and the John Paul II Cultural Center.Media interested in covering the event are asked to contact the USCCB Office of Media Relations at 202-541-3200 or email media-relations@usccb.org# # # # #Generations of Faith – An Interreligious EncounterUnited States Conference of Catholic Bishops - Secretariat for Interreligious Dialogue Pope John Paul II Cultural CenterNovember 18-19, 2010***3900 Harewood Road, NE, Washington, DC 20017Keynote address- Felix A. Machado, Catholic Archbishop of Visai, India* A prayer room will be available for participants of all faiths.* Refreshments will be available throughout the day.For inquiries, e-mail us at Media-Relations@usccb.orghttp://www.usccb.org/comm/archives/2010/10-197.shtml
Posted by JesusCaritasEst at 6:56 PM 0 comments
Email This BlogThis! Share to Twitter Share to Facebook Share to Google Buzz

AFRICA: ANGOLA: BISHOP'S REMAINS RETURN AFTER DEATH FROM CAR ACCIDENT
All Africa.com report: The remains of bishop of south-western Namibe province diocese, Dom Feliciano Mateus Tomás, arrived Wednesday in the region's capital.Dom Feliciano Mateus Tomás died on October 30 as a result of a car accident in Chongoroi locality, central Benguela province.The ceremony of reception of the remains is being attended by Dom 'scar Braga, Benguela emeritus bishop, Government officials, representatives of political parties, religious entities and others.Speaking to Angop at Yuri Gagarine airport, Dom Bilingue, southern Huila province's capital city (Lubango) archdiocese bishop, said that Christians are facing a hard moment caused by the death of the Namibe bishop.The priest was born on February 21, 1958, in Chinguar district, in central Bié province.Dom Mateus Feliciano was appointed bishop by Pope Benedict XVI and ordained bishop on June 21, 2009, at See Cathedral of central Huambo province, having been sworn in as Namibe bishop on July 5, 2009.http://allafrica.com/stories/201011040029.html
Posted by JesusCaritasEst at 6:24 PM 0 comments
Email This BlogThis! Share to Twitter Share to Facebook Share to Google Buzz 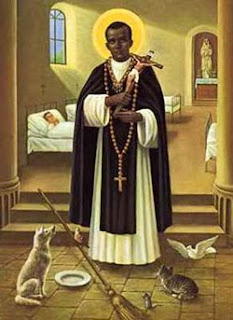 , Lima, PeruDied:November 3, 1639, Lima, PeruCanonized:May 6, 1962 by Pope John XXIIIMajor Shrine:Church and Convent of Santo Domingo, Lima, PeruPatron of:black people, hair stylists, innkeepers, mixed-race people, Peru, poor people, public education, public health, public schools, race relations, social justice, state schools, television, Peruvian Naval AviatorsHe was born in Lima, Peru, the illegitimate son of a Spanish knight, John de Porres, and a freed Panamanian slave named Anna. In 1594, Martin became a Dominican lay brother in Lima and served in various menial offices. Outside of the monastery he became known for his care of the poor and the sick. Martin founded an orphanage and ministered to African slaves brought to Lima. He was aided by St. Rose of Lima, who respected his penances and labors. Martin experienced many mystical gifts, including bilocation and aerial flights. When he was dying in Rosary Convent on November 3, the viceroy, the count of Chichon, knelt by his bed, seeking Martin's blessing. Martin, who is the patron of interracial justice, was canonized by Blessed Pope John XXIII (r. 1958-1963) in 1962.
SOURCE http://www.ewtn.com/saintsHoly/saints/M/stmartindeporres.asp
Posted by JesusCaritasEst at 6:22 PM 0 comments
Email This BlogThis! Share to Twitter Share to Facebook Share to Google Buzz

TODAY'S GOSPEL: NOV. 3: Luke 14: 25 - 33
Luke 14: 25 - 3325Now great multitudes accompanied him; and he turned and said to them,26"If any one comes to me and does not hate his own father and mother and wife and children and brothers and sisters, yes, and even his own life, he cannot be my disciple.27Whoever does not bear his own cross and come after me, cannot be my disciple.28For which of you, desiring to build a tower, does not first sit down and count the cost, whether he has enough to complete it?29Otherwise, when he has laid a foundation, and is not able to finish, all who see it begin to mock him,30saying, `This man began to build, and was not able to finish.'31Or what king, going to encounter another king in war, will not sit down first and take counsel whether he is able with ten thousand to meet him who comes against him with twenty thousand?32And if not, while the other is yet a great way off, he sends an embassy and asks terms of peace.33So therefore, whoever of you does not renounce all that he has cannot be my disciple.
Posted by JesusCaritasEst at 6:21 PM 0 comments
Email This BlogThis! Share to Twitter Share to Facebook Share to Google Buzz

Posted by Jesus Caritas Est at 10:33 PM No comments: Links to this post