TODAY'S SAINT : FEAST OF THE CHAIR OF ST. PETER

Posted by JesusCaritasEst at 5:56 PM No comments:

Catholic dioceses, parishes and schools have permission to download and reproduce these materials for free distribution.  Click on the PDF links to download. Printed copies of all of these resources may also be purchased from USCCB.  Click on the "order" links for more information.

O God, true shepherd of all the faithful,
look with kindness on your servant Pope Benedict XVI,
whom you set as head and shepherd of  Your Church.
We give you thanks for your grace at work in him
as he had led us by word and example:
in his teaching, in his prayer and in his great love.
Grant him your strength in frailty, comfort in sorrow,
and serenity amid the trials of this world;
and guide your Church, built on the rock of Peter,
with the power of your Spirit as we continue on the path that leads to you.
Through Christ our Lord.
Amen.

Prayer for the Election of a New Pope

O God, eternal shepherd, who govern your flock with unfailing care,
grant in your boundless fatherly love a pastor for your Church
who will please you by his holiness and to us show watchful care.
Through our Lord Jesus Christ, your Son,
who lives and reigns with you in the unity of the Holy Spirit,
one God, for ever and ever.
Amen.

Bulletin Insert: How a New Pope is Chosen (2-sided)

Download the PDF to read the text.
Posted by JesusCaritasEst at 5:49 PM No comments:

Posted by JesusCaritasEst at 5:48 PM No comments: Pilgrims in Rio will celebrate their faith under the welcoming outstretched arms of Christ the Redeemer
A nation-wide eConference is set for next Wednesday for pilgrims, participants, parishes, students and schools to receive the latest info on Rio-WYD13 and to have their questions answered without having to leave their home or their desks.
"The eConference will also feature first-hand testimonies from pilgrims who were at World Youth Day in Madrid and Sydney, and will speak about how each of these events deepened their faith and the impact each of these experiences has had on their lives," says Jake Ryan, Projects and Events Officer for the Archdiocese of Sydney and one of the key instigators and organisers of next week's eConference.
"We have had so many enquiries about Rio-WYD13 that an eConference seemed the ideal way to answer questions and give information and also create an open forum so people across the country can share their thoughts without leaving home," says Jake.
The eConference which will take place via international social networking site, Xt3.com at 7.pm on Wednesday, 27 February, will not only give detailed info on how Australian pilgrims will be housed together at specially-fitted out warehouses on Rio's spectacular waterfront, but will give details of the many different missions open to pilgrims in the week or two before the start of this year's WYD in Brazil," he says.
At previous World Youth Days, pilgrims were encouraged to spend several days or as long as a week in different towns and cities of the host country as part of the Days in the Diocese initiative. For all questions about WYD13 join
next week's eConference
But this has now been expanded to enable pilgrims to engage with the missions of religious communities and South American parishes- spending time helping out and working alongside the poor, oppressed, the homeless, disabled and with children housed at orphanages in city slums.
"Helping the vulnerable and those on the margins is very much part of the Catholic ethos," says Jake and while he admits the poverty in parts of South America may be confronting, he believes the experience will also be spiritually rewarding and life-changing.
For the past five or six years, Australian students and young people have spent their university holidays in January in countries like Peru where they have worked with members of the Fraternas, the Marian Community of Reconciliation and helped construct or repair village churches, taught English and RE to children at orphanages and brought comfort to the poor.
"More and more young people are becoming involved in mission work and see this as an important part of their faith, and a way of giving back to the community," says Jake.
Just as the 2012 London Olympic Games became known as the world's first Social Media games, WYD13 in Rio de Janeiro is set to become even more of a global social media event. Converted warehouses along waterfront port will become Aussie Central during WYD2013
Already thousands of young people worldwide are using social media to share their faith and enthusiasm for WYD13 on Twitter, Facebook, Xt3.com, SMS as well as on blogs and on the many specially-created WYD13 websites. Others are using WYD phone apps or logging on to the Pilgrim e-news.
The eConference planned for next week is yet further acknowledgement of the amazing advances in technology that have not only changed the way we communicate but now enable people no matter where they live to participate in forums, panels, and group discussions in real time as if they were in the same room or hall and not thousands of kilometres apart.
To find out more about the eConference and Rio-WYD13 go tohttp://www.sydneycatholic.org/youth2/index.asp?id=1&sectionid=0 or to Facebook at http://www.facebook.com/events/424730574282374/?ref=3

SHARED FROM ARCHDIOCESE OF SYDNEY
Posted by JesusCaritasEst at 5:45 PM No comments: 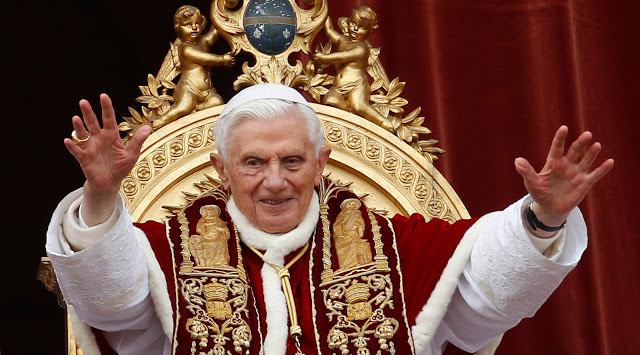 Share - Novena Prayers for Pope Benedict and the Election of a New Pontiff
Heavenly father, Your Providence guides the Church and the successor to St. Peter, Pope Benedict XVI. May he be protected at all times from spiritual attacks so that he may lead Your Church to greater holiness and unity through your Holy Spirit.
We invoke our Mother Mary, united in prayer with the disciples in the Upper Room, to intercede for our cardinals to select the next Holy Father in docility to the promptings of the Holy Spirit, her divine Spouse. With Mary, Mother of God and of the Church, we entrust this conclave to your maternal and Immaculate Heart, and offer these prayers for your guidance and protection over the choosing of the next Vicar of your Son. (Section from Dr. Miravelli)
Prayer for the Pope:
Let us pray for Benedict, the pope.
May the Lord preserve him,
give him a long life,
make him blessed upon the earth,
and not hand him over
to the power of his enemies.
May your hand be upon your holy servant.
And upon your son, whom you have anointed.
Prayer of St. Benedict
Gracious and holy Father,
please give to our Pope, his successor and
to we the faithful:
intellect to understand you;
reason to discern you;
diligence to seek you;
wisdom to find you;
a spirit to know you;
a heart to meditate upon you;
ears to hear you;
eyes to see you;
a tongue to proclaim you;
a way of life pleasing to you;
patience to wait for you;
and perseverance to look for you.
Grant your servant the
Pope, his successor and we the faithful:
a perfect end,
your holy presence.
A blessed resurrection,
And life everlasting.
Our Father...
Hail Mary...
Glory Be...
Amen.
Posted by JesusCaritasEst at 9:09 AM No comments:

Posted by JesusCaritasEst at 5:36 PM No comments:

TODAY'S SAINT : FEAST OF THE CHAIR OF ST. PETER

Feast of the Chair of St. Peter the Apostle
Feast: February 22

Posted by JesusCaritasEst at 5:35 PM No comments: