CNA report:
The Priestly Fraternity of St. Peter has announced its new seminary chapel at Our Lady of Guadalupe Seminary in Nebraska will be consecra 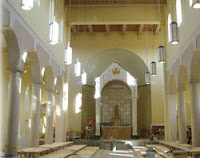 ted on March 3. Cardinal William Levada will attend the ceremony, which will be broadcast live on EWTN at 11 a.m. Eastern Time.
The ceremony is open to the public, but because of limited space rooms and television screens will be provided to those outside the chapel.
Bishop of Lincoln Fabian Bruskewitz will celebrate the Pontifical Consecration and Mass according to the Extraordinary Form of the Roman Rite.
The Priestly Fraternity of St. Peter (FSSP) is dedicated to the celebration of the Mass according to the Roman Missal of 1962. In a press release, the FSSP said it was “delighted” at Cardinal Levada’s presence, describing him as one of the highest ranking officials in the Catholic Church.
The FSSP said his attendance is connected with his position as President of the Pontifical Commission Ecclessia Dei, which is dedicated to facilitating the full incorporation of communities and individuals attached to the Extraordinary Form.
Our Lady of Guadalupe Seminary is located in rural Denton, Nebraska and is the FSSP’s English-speaking seminary. The seminary itself has 100 seminary rooms and 13 priest suites. It began construction in the fall of 1998.
The chapel consecration will “crown the heart and jewel of the seminary,” the Fraternity explained.
The seminary chapel, designed by architect Thomas Gordon Smith, reflects a “contemporary rebirth” of classical Catholic architecture, the FSSP said in a press release. Behind its mahogany doors are an elevated main altar with a 31-foot marble canopy, called a “baldachino.” The chapel has seven side altars and liturgical choir stalls, which seat 92 seminarians and priests.
The chapel immerses the visitor in “beauty and grandeur,” the FSSP said.
The seminary website is at http://www.fsspolgs.org.(source/: http://www.catholicnewsagency.com/news/cardinal_levada_to_attend_consecration_of_nebraska_seminary_chapel/
ASIA
NEPAL: ABUSE & TORTURE IN PRISONS TO MINORITIES
Asia News report:
Organization for Human Rights condemns the continuing abuses of police and armed forces in the prisons of 11 distri

cts of Terai (southern Nepal). Mainly affected the ethnic and religious minorities. Among the tortured children aged 9 years.
Kathmandu (AsiaNews) - Summary executions and the use of torture in prisons in the region of the Terai (southern Nepal) a hotbed of ethnic conflict, are on the increase. The Human Rights organization Advocacy Forum (AF) in a 93-page report released yesterday documents the repeated violence - murders, rapes, kidnappings, torture – carried out between January and September 2009 by police and armed forces against ethnic minorities in the region.
The Af report entitled "Torture and extrajudicial executions amid widespread violence in the Tarai" refers to a total of 15 executions that remained unpunished. According to the organization, the Nepal Police (NP) is responsible for 13 killings, while two were committed by members of the Armed Police Force (AF). The dead belong mostly to political groups linked to the Madeshi community, the ethic minority in the region that is fighting for autonomy. Witnesses said the victims were arrested during clashes between police and Madeshi members and killed on the spot by the officials.
"Once again we see how the Nepalese government has failed to conduct credible investigations and prosecute those responsible for these crimes," said Mandira Sharma, director of AF. "Impunity – she adds - shows the lack of an adequate security system. All this only adds to the resentment of ethnic groups towards the central government in Kathmandu.
The document is also a survey based on interviews with 1473 inmates. This shows the prevalence of torture in prisons in 11 districts: Banke, Barda, Dhanusha, Jhapa, Kanchapur, Kapilvastu, Morang, Siraha, Sunsari, Rupandehi and Udayapur. In the prison in the district of Dhanusha more than 30% of respondents admitted to having been tortured. In particular, women complained of continuous sexual abuse by the guards. Torture also cover 52% of children, in some cases as young as 9 years old. Mainly the ethnic and religious minorities are subjected to torture. Prisoners belonging to the Terai ethnic groups or Muslims are the most affected, while Hindus are given a better treatment.
In July 2009 the Nepalese government launched a special security plan to limit police violence, particularly in the region of Terai. Nevertheless it has not yet been implemented and no measure has been taken against the policemen responsible for violence.
"Until the law is applied and there is more investigations of these facts - says Mandira Sharma - the police will continue to use electric shock treatment in prisons, to carryout extrajudicial executions and use violence against detainees, including children, without having to account anyone.
(source: http://www.asianews.it/news-en/Nepalese-police-carry-out-torture,-killings-and-rapes-in-the-region-of-Terai-17527.html
AUSTRALIA
HENRY CARLON AWARDED PONTIFICAL EQUESTRIAN ORDER
Cath News report: NSW resident Henry Carlon has been awarded the Vatican's Order of Knight of the Pontifical Equestrian Order of St Gregory the Great, a distinction that recognises service to the Church, unusual labours and support of the Holy See.

Bishop Luc Matthys conferred the award following the celebration of the Eucharist in St Joseph's Church, Uralla, near Armidale, on January 30, the Australasian Religious Press Association said. The Order of St Gregory was established in 1831 by Pope Gregory XVI. Other famous recipients of the order have included Rupert Murdoch, and Bob Hope. It is understood that there are about 50 Papal knights throughout Australia. Henry Carlon has been a life-long member of St Joseph's Parish, Uralla. He and his wife Pamela have been married for 57 years. He has been an acolyte in the parish for 30 years. He serves at the altar at Mass on weekends and for many years he has taken communion to the elderly, and the sick. "Henry Carlon has led a remarkable life, a life that has been marked by a deep commitment to the Catholic Church and his Catholic faith. His contribution to the church on a parish and diocesan level has been outstanding. His contribution to Ecumenical affairs has been an example for good for people ofall Christian denominations," said the media release. Henry spent his working life in the development of fine Merino wool on his family sheep property, "Talisker" near Uralla. There are no privileges associated with the Order. However, recipients are allowed to ride on horseback through the Basilica, in Rome. No one has taken up the offer for many years. "Give me a Yamaha trail bike anytime," quipped Henry. (SOURCE: http://www.cathnews.com/article.aspx?aeid=19154
TODAY'S SAINT
St. Blaise
BISHOP, MARTYR
Feast: February 3
Information:
Fea

It is not known precisely when or where St. Blaise lived, but according to tradition he was a bishop of Sebaste, Armenia, in the early part of the fourth century, and suffered martyrdom under the Roman emperor Licinius, who had commanded the governor of the province, one Agricolaus, to prevent the spread of Christianity in his territory. After this edict had been promulgated, Blaise fled to the mountains and lived in a cave frequented by wild beasts. He used his skill to heal the animals that he found wounded or sick, and when the emperor's hunters, bent on collecting wild animals for the royal games, discovered him in this cave, they carried him off to Agricolaus as a special prize. On the way, the story goes, they met a poor woman whose pig had been seized by a wolf. At the command of Blaise, the wolf restored the pig to its owner, alive and unhurt. During the course of this journey he also miraculously cured a child who was choking to death on a fishbone. For this reason St. Blaise is often invoked by persons suffering from throat trouble. When he had reached the capital and was in prison awaiting execution, the old woman whose pig he had saved came to see him, bringing two fine wax candles to dispel the gloom of his dark cell. When he was finally killed, he is supposed to have been tortured with an iron comb or rake, and afterwards beheaded. In the West there was no cult honoring St. Blaise prior to the eighth century.
One of the Fourteen Holy Helpers, his emblems are an iron comb and a wax taper.
(SOURCE: http://www.ewtn.com/saintsHoly/saints/B/stblaise.asp
TODAY'S GOSPEL
Mark 6: 1 - 6
1
He went away from there and came to his own country; and his disciples followed him.
2
And on the sabbath he began to teach in the synagogue; and many who heard him were astonished, saying, "Where did this man get all this? What is the wisdom given to him? What mighty works are wrought by his hands!
3
Is not this the carpenter, the son of Mary and brother of James and Joses and Judas and Simon, and are not his sisters here with us?" And they took offense at him.
4
And Jesus said to them, "A prophet is not without honor, except in his own country, and among his own kin, and in his own house."
5
And he could do no mighty work there, except that he laid his hands upon a few sick people and healed them.
6
And he marveled because of their unbelief. And he went about among the villages teaching.
Posted by Jesus Caritas Est at 11:57 AM