ASIA
CHINA: BISHOP RAYMOND CHONGLIN DIES AGE 88
Asia News report: As a priest he spent 21 years in prison. He was ordained underground bishop, acknowledged by the Holy See, and then recognized by the government. The faithful remember his great commitment to evangelization and formation of priests and nuns.

Zhaoxian (AsiaNews) – Bishop Raymond Wang Chonglin, bishop of Zhaoxian (Hebei), died on Monday of a cerebral haemorrhage at the age of 88. During Maoism in 1950s-70s, he spent 21 years in prison. His funeral will be held on 8 February, at 9.30 am in the Cathedral of Biancun. The administrator of the diocese, Fr Simon Gao Baojin, confirmed to AsiaNews that the burial will take place the same day, at 1pm local time.
Fr. Gao points out that Bishop Wang has always been dedicated to training priests, seminarians and nuns, receiving the gratitude of his faithful. "We were brought up by his testimony since we were little," he said. "With a total trust in God – he adds - Bishop Wang urged all the faithful in evangelization, living a very simple and sober life".
Born in May 1921, Bishop Wang expressed the desire to become a priest since he was 14 years old. He was ordained priest in 1950.
In 1957, in the Party campaign against the Church, Bishop Wang was arrested and sent to prison for 21 years. Released in '79, he returned to evangelizing Hebei.
In 83 he was ordained underground bishop, and recognized by the Holy See as bishop of Zhaoxian with the mandate to administer to the area of Weixian. In ‘85 he reopened the diocesan seminary that had been closed in the '50s, and in '88 he formed a convent for female vocations.
In 88 the government has named him as bishop of Xingtai, covering Church matters in Zhaoxian, Shunde and Weixian.
In 2006 he retired, leaving the pastoral care of the diocese to Bishop Jiang Mingyuan, a bishop unofficially ordained by him in August 2000. Although the government has hindered the succession, Bishop Jiang officially headed the diocese in 2006. Bishop Wang retired. But in 2007 Bishop Jiang fell ill and asked Bishop Wang to resume care of the diocese. Bishop Jiang died in July 2008.
The (underground) Diocese of Zhaoxian overlaps with those of Shijiazhuang and Xingtai (according to administrative subdivisions of the government). This could have brought tensions and difficulties with the authorities. Anthony Lam, a researcher at the Holy Spirit Study Centre in Hong Kong, who has met Bishop Wang a few times, said that the bishop "was very intelligent and capable of finding solutions to problems, without a direct confrontation with the government”. Lam also recalled the great efforts of Bishop Wang in the formation of priests and nuns. "He was very strong physically - he adds - and also very optimistic. He realised important pastoral and missionary work especially in the countryside. " (SOURCE: http://www.asianews.it/news-en/Bishop-Wang-Chonglin,-bishop-of-Zhaoxian-(Xingtai)-dies-17522.html
AFRICA
NIGERIA: ARCHBISHOP COMMENTS ON SITUATION AT JOS
CISA report:
Religious leaders, elders, policy makers have been meeting to try and restore calm and peace in Jos in North Central Nigeria. The situation is improving, according to Archbishop of Jos Diocese Ignatius Ayau Kaigama.“We had several meetings that were very fruitful, with policy makers, religious and elders, [trying] to restore calm and peace in our community,” Archbishop Kaigama told Fides.In recent days, serious inter-communal clashes have killed 326 people, according to reports. The Archbishop of Jos also emphasized that "there has been a decrease in the number and intensity of alarming messages arriving on mobile phones, which had been reported earlier."I do not know if there is a strategy behind it all, to spread them. I remember the precedent of Kenya, in 2008, when the violence was also fuelled by the phone messages that instilled fear and hatred,” he said.The archbishop explained that some of these messages are sent by ordinary people whose homes have been attacked or have seen their neighbour’s houses being set on fire and they send messages alerting friends and relatives about what is happening.He said this occurs among both the Christian and Muslim communities and that they have greatly contributed to spreading fear and thus, “to fuelling hatred and violence." (SOURCE: http://www.cisanewsafrica.org/story.asp?ID=4374
EUROPE
SPAIN: WYD MADRID CALLS FOR PROPOSALS
CNA report: Organizers for World Youth Day Madrid 2011 have recently called for proposals for the event's 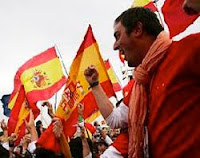 Youth Festival, an aspect of the international gathering intended to “manifest how faith becomes culture.”
The Youth Festival, held during each World Youth Day, is described by organizers as an “ensemble of artistic and cultural activities” including music and dance, theater, art exhibitions, design of urban spaces, displays of the Church's social work across the globe, biographies of saints and missionaries as well as cinema and audiovisual productions.
An online announcement detailed the criteria for proposals and stated that the submissions need “to be lively, contemporary and important expressions for today's young people,” inspired by the Christian virtues of faith, hope, charity, joy and fortitude. Also mentioned in the specifications was the requirement for proposals to “manifest a universal beauty, accessible to people of different cultures” and to also be “of great artistic quality.”
Though the festival is organized by international committee members, emphasis is placed on the local committee and the culture of the country hosting World Youth Day.
“The principle framework of the Youth Festival is the history and cultures of Spain,” said the online statement, which described Spain as “a country of apostolic tradition, where the faith has taken root and borne innumerable fruits of sanctity; from which innumerable missionaries have left to take the faith to the five continents... .”
Youth Festival organizers will select submissions based on relevance, artistic quality, universality and technical and financial feasibility. Those interested in submitting proposals are required to do so by April 1, 2010. More information can be found at http://www.madridwyd2011.com/.
(SOURCE; http://www.catholicnewsagency.com/news/world_youth_day_2011_calls_for_artistic_and_cultural_submissions/
AMERICA
BOLIVIA: PRESIDENT VIOLATES CONSTITUTION
CNA report:
Constitutional, political and social analysts noted recently that the President of Bolivia, Evo Morales, violated the constitution he himself signed into existence by celebrating a pre-Colombian “ancestral blessing” rite. Bolivia’s constitution states in article four that the State shall be secular and “independent of any religion.”
Carlos Cordero, an expert in languages, explained that if Bolivia defines itself as a secular country, “The correct thing would be for the President not to show support for any particular religion,” instead of wanting to “erase from Bolivian memory the symbols and important figures who were part of our history.”
Other experts interviewed by the media said the celebration of this “ancestral blessing” was motivated by the government’s desire to replace the religious ceremonies that were carried out by previous administrations.
Jorge Lazarte, also an expert in languages, explained that while the rite appears to violate the constitution, the constitution promulgated in February of 2009 contains actual contradictions. In one place it notes “the state shall have no official religion, and later in another series of articles it supports the revival of practices inspired by the indigenous worldview.”
Although government officials said the ceremony with Morales was an expression of the freedom of religion, other experts pointed out that it was in contradiction with the government’s policy, as the armed forces cannot hold Catholic ceremonies, but participate in ones such as that attended by Morales.(SOURCE: http://www.catholicnewsagency.com/news/bolivian_president_violates_constitution_with_ancestral_blessing/
AUSTRALIA
MORE THAN 500 ATTEND FUNERAL OF DROWNED PARENTS
Cath News report:
More than 500 people packed out Our Lady Queen of Peace Catholic Church at Greystanes in Sydney's west for the funeral of Carole and Joe Sherry, who drowned in front of their children off South Ballina Beach in NSW last month.
The couple had been holidaying with their three children - Monique, 17, Elise, 14, and Nicholas, 9 - when they drowned on January 19, the Sydney Morning Herald reports.
Mrs Sherry, 44, died after swimming out to help her children who had become stuck in a rip. When she got into trouble, Mr Sherry, 42, swam out to save her.
The children emerged from the water to find both their parents missing.
At the funeral, Elise and Nicholas spoke lovingly of their parents, who they said were prepared to do anything for them.
The children told of their "immaculately" dressed mother, who was greatly respected as a teacher and who had inspired others into the profession.
The children also spoke of their father who had three main passions - his car, his garden and his family. (SOURCE: http://www.cathnews.com/article.aspx?aeid=19130
TODAY'S SAINT
St. Bridgid of Ireland
VIRGIN, PATRONESS OF IRELAND
Feast: February 1
Information:
Feast Day:
Febr