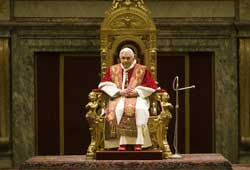 - The Holy Father appointed: - As members of the Congregation for the Causes of Saints, Archbishop Edmond Farhat, apostolic nuncio, and Bishop Raffaello Martinelli of Frascati, Italy.

- Msgr. Mark Davies of the clergy of the diocese of Salford, England, vicar general, as coadjutor of Shrewsbury (area 6,136, population 1,862,000, Catholics 222,000, priests 152, permanent deacons 45, religious 189), England. The bishop-elect was born in Manchester, England in 1959 and ordained a priest in 1984. - As consultors of the General Secretariat of the Synod of Bishops: Msgr. Ermenegildo Manicardi, rector of Rome's Alma Collegio Capranica; Fr. Markus Graulich S.D.B., substitute promoter of justice at the Supreme Tribunal of the Apostolic Signatura; Fr. Godfrey Igwebuike Onah, vice rector of Rome's Pontifical Urban University; Fr. Paul Bere S.J., professor of Old Testament studies and biblical languages at the "Institut de Theologie de la Compagnie de Jesus" and the "Universite Catholique de l'Afrique de l'Ouest" in Abidjan, Ivory Coast, and at the "Hekima College Jesuit School of Theology" in Nairobi, Kenya; Fr. Juan Javier Flores Arcas O.S.B., rector of Rome's St. Anselm Pontifical Athenaeum; Fr. Paolo Martinelli O.F.M. Cap., president of the Franciscan Institute of Spirituality at the Antonianum Pontifical Athenaeum in Rome and professor of dogmatic and spiritual theology at the Pontifical Gregorian University, and Fr. Samir Khalil Samir S.J., professor of the history of Arab culture and of Islamic studies at St. Joseph University in Beirut, Lebanon.NA:NER:NEC/.../... VIS 091222 (290)
AMERICA
US: SUPREME KNIGHT, ANDERSON, SPEAKS ABOUT JPII
CNA reports that following the declaration by Pope Benedict XVI that his predecessor John Paul II lived a life of “heroic virtue,” CNA spoke with Carl Anderson, the head of the Knights of Columbus, who is very familiar with the late Pope. According to Anderson, John Paul II's life speaks directly to the problems society confronts today.
Reflecting on the timing of the declaration that the late Pontiff is Venerable, Anderson told CNA, “I think the timing of this declar 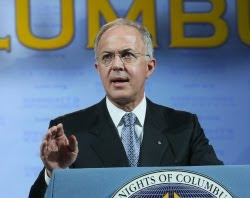 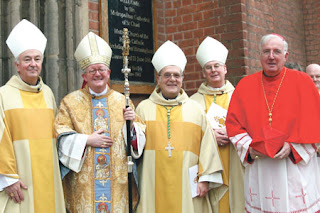 second Bishop and the first Archbishop of Birmingham (1888-1921). More than 325 priests from the archdioceses of Birmingham, Westminster, Southwark, and the Diocese of Arundel and Brighton, concelebrated the Mass, together with most of the hierarchy of England and Wales. The Abbot of Pluscarden and St Augustine's Abbey, Ramsgate, were also present. Archbishop Mario Conti of Glasgow represented Cardinal Keith O'Brien, Archbishop of St Andrews and Edinburgh. The hierarchy in Ireland were represented by Bishop Noel Treanor of Down and Connor, together with his auxiliary, Bishop Anthony Farquhar. Also present was Bishop Charles Caruana, Bishop of Gibralta 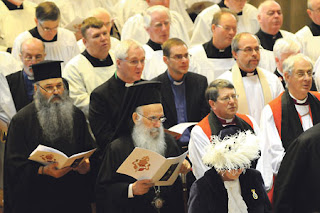 r. Among Archbishop Bernard Longley's personal guests were his father, Fred Longley, aged 81, and his sister, Kathleen Lloyd. The civic leaders and ecumenical guests present included the Anglican Bishop of Birmingham, Bishop David Urquhart, and the Lord Mayor of Birmingham, Councillor Michael Wilkes and the Lady Mayoress.Lord Camoys, Lord in Waiting to the Queen from 1992 to 97 and a Permanent Lord in Waiting since 2000, represented Catholic members of the House of Lords. Archbishop Bernard's hobbies include singing, especially English songs and German lieder. (SOURCE: http://www.catholicherald.co.uk/life/cl0000594.shtml
AFRICA
KENYA: NUNCIO URGES PEOPLE TO WORK HARDER FOR PEACE
CISA reports that Kenyans have been urged to work harder for peace, justice and reconciliation.They were also urged not to take the existing peace in the country for granted.The sentiments were sounded by the Apostolic Nuncio to Kenya, Archbishop Alain Paul Lebeaupin on Sunday, December 20, when he officially closed the week-long family celebrations by Nairobi’s Holy Family Minor Basilica Parish.Under the theme: We are the family of God, hundreds of parishioners thronged the Parish’s large Hall to listen to lectures based on the family, religious life and the church as an institution. Each day had a particular them including; Bible, careers and vocations, Health and Rosary, family values and family fan.Cardinal John Njue said Mass for the congregation on Wednesday, December 15In his homily, the Apostolic Nuncio stressed the need for the Church to continue to centralize the family in its pastoral commitment.“The family is the first Church; hence we should make every effort to have it strengthened in all aspects”, he further stressed that the family remained an effective base for strong Christianity, society as well as the nation.He also recalled that unlike in recent past, Kenya is now witnessing peace.“The challenge for us is to ensure that “our negative past” is not repeated here again”, he further told the congregation.The Apostolic Nuncio was making reference to the post elections violence that had rocked the country after the controversial 2007 general elections.The violence caused a loss of more than 1,000 lives and over 300,000 people internally displaced and property worth millings of shillings, destroyed.(SOURCE: http://www.cisanewsafrica.org/story.asp?ID=4323

Cath News reports that parents of Mike Tannous, a 17 year old who died in a car accident, claim that their son is helping heal people through the us 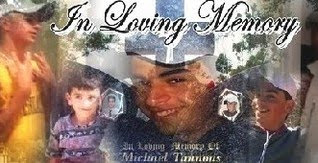 e of a "mysterious oil" that weeps from his bedroom walls, The Daily Telegraph reports.
"Mike is a messenger between us and God. He has healed so many people," Mrs Lina Tannous said about Mike, who died in September 2006.
The news report said that scientific testing of the oil has failed to identify exactly what it is but that has not stopped hundreds praying at the home.
The Tannous' said their son could be Australia's first male saint. The family was documenting healing that was occuring, the report adds.
"Our boy is a saint. This is him talking to us, talking to other people," he said.
Last year a woman who lived near the Tannous' house was told by doctors she could not have the third child she desperately wanted.
"She came here and prayed... one month later she came with a box of chocolates and said 'Guess what, I am pregnant'," Mike's aunt Susan Sawan said.
Since Pope Benedict XVI confirmed Mother MacKillop's second miracle, scores of people have flocked to the Tannous' house.
And the oil has continued to weep, now appearing on almost every wall of the three-bedroom house, as well as on framed photos
(SOURCE: http://www.cathnews.com/article.aspx?aeid=18459
ASIA
INDONESIA: RE-CONSTRUCTIONS OF CHURCH FOLLOWING ATTACK

UCAN reports that Catholics have vowed to complete the constr 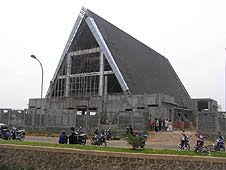 uction of their chapel following an arson attack by an angry mob that caused thousands of dollars of damage.

St. Albert chapel
The mob attacked workers, destroyed building materials and set equipment and facilities ablaze in the Dec. 17 midnight attack on the unfinished St. Albert chapel building in Bekasi, West Java.
"I heard them shouting: 'Destroy it! Destroy it! Replace the church with mosque!'" a witness, construction worker Slamet, told UCA News.
Christina Maria Rantetana, chairperson of the construction committee, said a crowd of 2,000 men, women and children, some on foot, others on motorbikes and in pick-up trucks, had marched on the church.
"At first I was not suspicious as we had never received any threat before but when (about 200 of them) entered the compound, I immediately called the police," she said.
Police were initially outnumbered, she noted.
The crowd dispersed an hour later after tear gas was used. Twenty-seven people were held for questioning.
By then the mob had stoned construction workers, smashed 2,000 boxes of ceramics and burnt the security gate, a warehouse, the project consultant's office, the committee's office, and a motorbike, Rantetana said.
They also damaged bricks, broke lights and uprooted newly planted trees. No one was injured but damage amounted to around 60 million rupees (US$6,200). 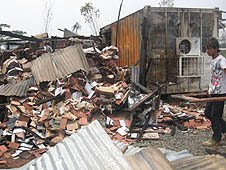 mittee’soffice reduced to rubble by arsonists
"When they ransacked the church, I was one of about 100 other workers inside," Slamet recalled. "They stoned us and forced us to leave. We panicked and escaped by scrambling over the seven-meter fence. Some of us suffered minor scratches on legs and arms."
The attacks came out of the blue, said Geovani Baptista Rosi Iwan Setiadi, chairperson of the chapel council. There had been no previous threats to Catholics here nor disruption to the three Masses they hold at various locations every Sunday.
He believed what has happened "will further unite us."
Rantetana said the attackers were not from the neighborhood. Witnesses identified some as members of the Islamic Defenders Front, a radical organization responsible for attacks on Christian facilities elsewhere in Indonesia.
"Even though our chapel was attacked we are not afraid. We will continue the construction of this chapel until its completion," Rantetana said.
St. Albert chapel, part of a mission station under St Michael Parish, is being built at a cost of 15 billion rupees to accommodate a growing number of Catholics in the area.
The building covers 7,000 square meters and is designed to accommodate 2,000 people at any one time. There are at present more than 5,500 Catholics who attend services at the mission station.

Bishop of Nilopolis, in Egypt. When the sever anti-Christian persecution was instituted by Emperor Trajanus Decius (r. 249-251), Chaeromon was quite elderly. he and several companions fled into the Arabian Desert and were never seen again. The bishop and his companions are listed as martyrs.
(SOURCE: http://www.ewtn.com/saintsHoly/saints/C/stchaeremon.asp

TODAY'S GOSPEL
Luke 1: 46 - 56
46
And Mary said, "My soul magnifies the Lord,
47
and my spirit rejoices in God my Savior,
48
for he has regarded the low estate of his handmaiden. For behold, henceforth all generations will call me blessed;
49
for he who is mighty has done great things for me, and holy is his name.
50
And his mercy is on those who fear him from generation to generation.
51
He has shown strength with his arm, he has scattered the proud in the imagination of their hearts,
52
he has put down the mighty from their thrones, and exalted those of low degree;
53
he has filled the hungry with good things, and the rich he has sent empty away.
54
He has helped his servant Israel, in remembrance of his mercy,
55
as he spoke to our fathers, to Abraham and to his posterity for ever."
56
And Mary remained with her about three months, and returned to her home.
Posted by Jesus Caritas Est at 11:54 AM