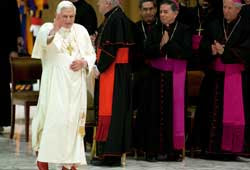 EUROPE
SPAIN: HOUSE OF REPRESENTATIVES VOTES ON LIFE
CNA reports that Spain’s House of Representatives voted 184 to 158 to pass a reform to the country’s abortion laws that would allow for the procedure up to the 14th week of pregnancy and limit the conscientious objections of medical 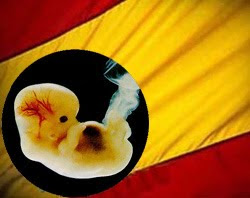 professionals. The bill, which now moves to the Senate, would also permit 16 year-olds to obtain abortions and force medical schools to teach abortion as a subject.
Socialists, together with other left-wing lawmakers, gathered enough votes to ensure the bill’s passage in the House.
Bishop Juan Antonio Reig Pla of Alcala, who is also president of the the Spanish Bishops’ Subcommittee on Life and the Family, told the COPE Network, “This is a long-term battle. We are experiencing a time of darkness, of crisis in which reason has been overshadowed by perverse freedom.”
“Today we must say to the House of Representatives: Don’t do it,” he added.
The pro-life organizations HazteOir (HO) and Right to Life have strongly rejected the new bill. HO president Ignacio Arsuaga emphasized that the measure would only lead to greater opposition among Spaniards.
“Knowing that this is nothing more than one battle in the long struggle to defend life and women, we will not cease to insist that they listen to society, who is now faced with the profoundly unjust legal reform they are trying to impose on us,” he added.(SOURCE: http://www.catholicnewsagency.com/news/socialists_vote_to_approve_new_abortion_law_for_spain/
AMERICA
USA: POPE ACCEPTS RESIGNATION OF ARCHBISHOP PILARCZYK; AGE 75
The USCCB reports that Pope Benedict XVI has acaccepted the resignation of Archbishop Daniel E. Pilarczyk, 75, from the pastoral care of the archdiocese of Cincinnati. He is succeeded by Coadjutor Archbishop Dennis M. Schnurr, 61.The resignation and succession were announced at the Vatican, December 21. Pope Benedict had named Archbishop Schnurr co-adjutor archbishop of Cincinnati with the right of succession, October 17, 2008. Archbishop Schnurr previously had been bishop of Duluth, Minnesota.Archbishop Schnurr is a native of Sheldon, Iowa and was named Bishop of Duluth January 18, 2001, when he was General Secretary of the United States Conference of Catholic Bishops. He was ordained a priest for the Diocese of Sioux City, Iowa, July 21, 1974.Dennis Marion Schnurr was born June 21, 1948, and raised in Hospers, Iowa. He was educated in local Catholic schools and Loras College, Dubuque, where he earned a Bachelor of Arts degree. He studied for the priesthood at North American College and the Gregorian University, Rome, where he earned a Master of Arts degree in Theology in 1974. He was awarded a Doctorate in Canon Law from The Catholic University of America in 1980.After ordination to the priesthood, he worked in parish assignments and as vice-chancellor and chancellor of the Sioux City Diocese. In 1985, he was assigned to the staff of the Apostolic Nunciature in Washington, where he gave advice on canon law, monitored financial affairs and researched issues of interest to the church. In 1989, he was appointed Associate General Secretary of the United States Catholic Conference/National Conference of Catholic Bishops (NCCB/USCC), where he supervised pubic policy departments and was principal staff person for an assessment and overhaul of the Conferences’ budget and staffing procedures. In 1995, the bishops elected him General Secretary of the NCCB/USCC.After being named a bishop, Archbishop Schnurr served on the USCCB Administrative Committee and Executive Committee and was vice-president of the Priorities and Plans Committee, a member of the board of trustees of the Confraternity of Christian Doctrine, Inc., and on the Task Force on Promotions of Vocations to the Priesthood and Religious Life. Archbishop Pilarczyk, a native of Dayton, Ohio, was ordained December 20, 1959, for the Archdiocese of Cincinnati where he was chancellor and on the faculty of St. Gregory Seminary. He was named Auxiliary Bishop of Cincinnati in 1974, and named Archbishop of Cincinnati, November 2, 1982. He holds a Doctorate in Sacred Theology from the Urban University, Rome, and a Doctorate in Classics from the University of Cincinnati. He served as vice-president of the NCCB/USCC from 1986-1989, and president from 1989-1992. He also served as a consultant to the U.S. bishops’ Committee on Ecumenical and Inter-religious Affairs.The Cincinnati Archdiocese includes 19 counties in Ohio. The total population of the archdiocese is estimated at 2,988,285 people, with 485,112 of them Catholic.
(SOURCE: http://www.usccb.org/comm/archives/2009/09-265E.shtml

CISA reports that an ecumenical prayer service was held in Nairobi on December 10 for peace in the Horn of Africa region.The ecumenical prayers were jointly organized by the regional church bodies; the Association Member Episcopal Conferences of Eastern Africa (AMECEA), the All Africa Conference of Churches (AACC), Christian Councils in 40 African countries and the Fellowship of Christian Councils in the Great Lakes and the Horn of Africa regions (FECLAHA).Participants at the prayer service observed that many a people in the region lacked peace, which was necessary for human and spiritual development.Justice and peace coordinator of AMECEA, Fr. Jude Waweru said, “In the face of this unfortunate scenario, we have desperately witnessed to the sufferings of our brothers and sisters in the Horn of Africa.”Fr Waweru further said although God created us, a free people to speak, to move, to interact and socialize, we see serious constraints. Fear has engrossed your people and poverty has become their bread.”The Horn of Africa is arguably the most troubled plagued by conflict, poverty and poor governance, in Africa.In poor Somalia, an 18-year civil war has forced more than a million people from their homes, leaving behind a safe haven for pirates and, possibly, Islamic terrorists. In Ethiopia, an increasingly authoritarian, Western-backed government has jailed opposition leaders and clamped down on the press and human rights activists. In tiny Eritrea, a government that once won the admiration of legions of Western diplomats and journalists for its self-sufficiency and discipline has become an isolated dictatorship.(SOURCE: http://www.cisanewsafrica.org/story.asp?ID=4299 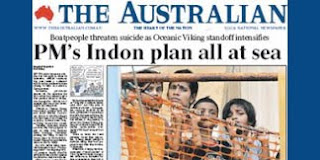 asylum seekers rescued by the Australian Customs ship Oceanic Viking have left Indonesia, with two granted resettlement in Australia and 13 others likely to be settled in Canada.
The two being granted an Australian visa and who arrived yesterday were "a vulnerable individual and his carer", the Sydney Morning Herald reports. Their identities were not released for reasons of privacy, said a spokesman for Immigration Minister Chris Evans.
The United Nations High Commissioner for Refugees had referred the two to Australia for resettlement and the pair had met the legal requirements for a visa grant under normal immigration processes, the spokesman said.
The 13 others had been processed and referred for possible resettlement in Canada. They were flown to Europe at the weekend to a refugee transit centre there.
"Canada has agreed to consider those with close family links to Canada and who meet Canadian resettlement criteria, including security requirements," Senator Evans's spokesman said.
The US, New Zealand and Norway are also expected to take some of the 78 Tamils, following intense diplomatic lobbying by the government to find homes for them, The Australian reports. (SOURCE: http://www.cathnews.com/article.aspx?aeid=18442

UCAN reports that an attack on a Christmas fair in Madhya Pradesh has spread panic among Christians in the state, says an organizer of the event.

Father Anand Muttungal
Thugs chanting Hindu slogans torched representations of biblical scenes at the fair in the town of Gwalior on Dec. 20. The police have arrested one of four men they named in connection with the incident.
The group evoked the names of Hindu deities and started damaging the biblical artworks depicting scenes from the life of Christ, said fair coordinator Raju Francis.
The Catholic layman told UCA News that local Christians had held the two-day fair before Christmas for eight years on public land near a market.
"Everything went well on the first day," he said. On the second day, the troublemakers not only spoiled the fair but sent panic through the Christian community in the state, he said.
Archbishop Leo Cornelio of Bhopal said the attack "is a matter of serious concern for Christians especially when we are preparing to celebrate Christmas."
The prelate has sent a three-member fact finding team to Gwalior, headed by Father Anand Muttungal, spokesperson of the Catholic Church in the state. The archbishop has asked the team to submit its report in two days.
Archbishop Cornelio said he would in turn submit the report to the state government and seek protection for Christians and their institutions, especially during Christmas Eve midnight Masses.
Christians, who form less than 1 percent of the state's population, have experienced sporadic violence since the pro-Hindu Bharatiya Janata Party (BJP)) came to power in December 2003.
Archbishop Cornelio told UCA News it is the government's duty to protect its citizens from attacks.
He says the morale of anti-Christian groups is "very high" as the state government seldom takes action against them.
(SOURCE: http://www.ucanews.com/2009/12/21/christmas-fair-attacked/
TODAY'S SAINT
St. Peter Canisius
DOCTOR OF THE CHURCH
Feast: December 21
Information:
Feast Day:
Dece 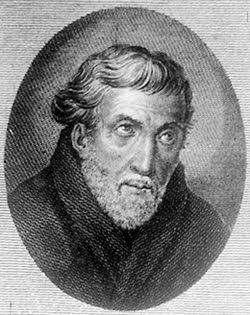 This doctor of the church is often called the second Apostle of Germany. Both Holland and Germany claim him as their son, for Nijmegen, where he was born, May 8th, 1521, though a Dutch town today, was at that time in the ecclesiastical province of Cologne and had the rights of a German city. His father, a Catholic and nine times burgomaster of Nijmegen, sent him at the age of fifteen to the University of Cologne, where he met the saintly young priest, Nicolaus van Esch. It was he who drew Canisius into the orbit of the loyal Catholic party in Cologne, which had been formed in opposition to the archbishop, Hermann von Wied, who had secretly gone over to the Lutherans. Canisius was chosen by the group to approach the emperor, and the deposition of the archbishop which followed averted a calamity from the Catholic Rhineland. Shortly afterwards Peter Canisius met Bd. Peter Faber, one of the first companions of St Ignatius, and made the
TODAY'S GOSPEL
Luke 1: 39 - 45
39
In those days Mary arose and went with haste into the hill country, to a city of Judah,
40
and she entered the house of Zechari'ah and greeted Elizabeth.
41
And when Elizabeth heard the greeting of Mary, the babe leaped in her womb; and Elizabeth was filled with the Holy Spirit
42
and she exclaimed with a loud cry, "Blessed are you among women, and blessed is the fruit of your womb!
43
And why is this granted me, that the mother of my Lord should come to me?
44
For behold, when the voice of your greeting came to my ears, the babe in my womb leaped for joy.
45
And blessed is she who believed that there would be a fulfilment of what was spoken to her from the Lord."
Posted by Jesus Caritas Est at 10:54 AM