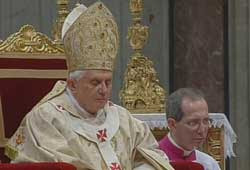 Pope Benedict said during his St. Stephens Day Angelus the testimony of Stephen, like all the Christian martyrs, shows to our contemporaries, who are often distracted and disoriented, on whom we should place our trust in order to give meaning to life. The Pope said the martyr in fact is the one who dies with the certainty that he is loved by God, and who, putting nothing before the love of Christ, knows that he chose the better side. St. Stephen, like his Master, died forgiving his persecutors, making us understand that the entry of the Son of God into the world gives rise to a new civilisation, a civilisation of love that does not surrender to evil and violence, but breaks down barriers between men making them brothers in the great family of the children of God.
(SOURCE: http://www.youtube.com/watch?v=Sp-y49yJyEI

All Africa reports that at least 15, mostly civilians have been killed and over 30 others injured in heavy clashes that erupted between Somali militants and government forces backed by African Union troops in the restive capital Mogadishu, witnesses.
The clashes started on late Wednesday in the capital's KM4 and Dabka intersections and Shaqalaha road, where fighters loyal to Somalia's Hizbul Islam carried out surprise attacks on government positions, leading to heavy gun battle.
Eyewitnesses said the fighting killed at least 15 people, mostly civilians and caused the injuries of several other civilians.
Mohammed Osman Arus, Hizbul Islam spokesman confirmed that his forces carried out attacks on government and AU troops, killing several soldiers.
"We carried out attacks on their positions. I saw dead bodies of three AU soldiers with my on eyes," he claimed.
AU troops' spokesman Barigye Bahoku, however, refuted those claims, when reached for comments.
The latest clashes are part of deadly clashes between rebel fighters and government troops backed by AU troops that wrecked the restive seaside capital in recent days.(SOURCE: http://allafrica.com/stories/200912250001.html

th toll so far is of three dead - a Chaldean Christian and two Muslims - and several wounded. Louis Sako, archbishop of Kirkuk, speaks to AsiaNews of a "disturbing message" ahead of Christmas, keeping tensions high as well as fear of further violence in northern Iraq.
Sources for AsiaNews in Mosul confirm that "the situation for Christians continues to worsen, given that the Christians buildings are again being targeted by terrorists. The two churches hit are two old buildings, of great historical and cultural value”.
In the attack on the church of Saint George three people were killed: a Chaldean Christian and two Muslims, others were injured. Local witnesses report that the explosion was caused by "a cart of vegetables, filled with bombs." From the initial reconstruction, it seems that the target of the attack was a police barracks in the district of Khazraj. In the last six weeks in Mosul four churches and a convent of Dominican nuns have been attacked. The explosions were caused by car bombs producing serious damage to buildings and adjacent homes, Christian and Muslim. Five Christians have been murdered and others have become victims of kidnapping for ransom. These targeted attacks testify to the "ethnic cleansing" in act against the Christian community throughout Iraq.
Louis Sako, archbishop of Kirkuk, believes today attacks are yet another "disturbing message" to two days before Christmas. These threats, stresses the prelate, "continue to influence the Christian community" that hopes "for peace" but is the victim of violence. "The message of peace and hope - reaffirms the archbishop of Kirkuk - announced by angels, remains our best wishes for Christmas for the entire country: we want to work together to build peace and hope in the hearts of all men and women of Iraq. "(DS)
(SOURCE: http://www.asianews.it/index.php?l=en&art=17204&size=A

The Catholic Register reports that the Christmas season always brings an upswing in sales for stores specializing in religious items as the public scrambles to buy Christmas cards and wreaths, gifts and Nativity sets for their home. But for some religious suppliers, this year brought some interesting surprises. “This year, surprisingly, we’ve been doing really well with Nativity sets. The general public has been buying full Nativity sets, adding pieces to their existing ones and also little baby Jesus’ on their own,” said Sal DiCarlo, head of DiCarlo Religious Supply Centre in Toronto. Though the general public usually goes for the smaller creches, DiCarlo’s has sold a number of three-by-five-foot church-size creches, including the new creche in front of Toronto’s Old City Hall. “We’ve felt people are getting back into displaying their faith,” DiCarlo said. “For a while it was taboo to say ‘Merry Christmas’ — it was more like ‘Happy Holidays’ — but now the acceptance has come back and it’s OK to say Merry Christmas. And we can actually see there are more people buying Nativity sets.” Brent Brodhurst, general manager of Broughton’s Religious Books and Gifts in Toronto, said he hasn’t noticed a greater demand this year for any one particular item, but as usual, anything Advent- or Christmas-related has been moving out the door at rapid speed. “The cards, the candles, the wreaths and Nativity scenes are mainstays. And there’s such a variety of product and such a variety of desires out there,” Brodhurst said. In the past year or two Brodhurst has noticed a small shift in buyers’ tastes.“We’re seeing younger people demand more contemporary items,” he said. “There seems to be more acceptance of modern-style Christmas and holy messages in some of the Christmas tree ornaments and cards.”He said there is some demand for more contemporary Nativity scenes as well, but that doesn’t mean traditional items have waned in interest.“(It’s) a very small shift, but we’re certainly seeing an effect of the younger crowd coming in and picking up Christmas items and some of them are looking for a fresher look than the old traditional style.”Novalis Publishing, which publishes the Living with Christ prayer missal, hoped to reach more Catholics this year through its web site and mail-in Christmas insert which it distributed through Catholic newspapers across the country. “In a day and age when you have fewer and fewer religious book stores or Catholic book stores across the country, it’s really important for us to reach out as much as we can to people directly,” said Loretta Santarossa, director of sales and marketing at Novalis. Novalis’s increased effort seems to have paid off, as books are flying off the shelves this year, Santarossa said. But it may also have to do with the shift in types of books published.“Before, some of the books we published were more academic and those had a limited kind of appeal. So I think the books we’re publishing right now seem to be appealing to the broader audience,” Santarossa said. A shift was made towards publishing more contemporary or cultural themed-books such as New Faces of Canadian Catholics: The Asians by Fr. Terence Fay, A View from the Trenches by Msgr. Dennis Murphy and the best-seller Death or Canada by Mark McGowan.But spiritual self-help books are also in high demand, said Santarossa.“I think what’s important is they’re not just becoming more interested, they’re buying stuff to feed their soul,” she said.Catholics also seem to appreciate when all types of gifts have a religious connection, she said, which means there has been demand for items in the Christmas catalogue like fruitcake and chocolates made by Trappists at the Abbey of Val Notre-Dame and Christmas cards made by the Benedictines.
(source: http://www.catholicregister.org/content/view/3716/

Edward Schillebeeckx, controversial theologian, dead at 95 December 24, 2009
Father Edward Schillebeeckx, an influential Dominican theologian, died at his home in the Netherlands on December 23 after a long illness at the age of 95. Born in Belgium, he was an adviser to the Dutch bishops during Vatican II. Later his theological work emphasized the universal priesthood of the laity, to the extent that the Congregation for the Doctrine of the Faith issued a caution in 1986 that his theories were at odds with the teachings of the Church. (source: http://www.catholicculture.org/news/headlines/index.cfm?storyid=5015

AUSTRALIA
CHRISTMAS MESSAGE FROM CATHOLIC BISHOP'S CONFERENCE
Christmas Message from Archbishop Philip Wilson, president of the Australian Catholic Bishops Conference
Pope Benedict XVI has said that it’s amazing how the feast of Christmas captures the imagination of people everywhere and in world terms it figures more prominently than even Easter. Why is this so? It’s because of the great mystery of birth and the fact that every birth introduces new life into the history of the world. With every new life there are new possibilities for men and women everywhere. Whilst this is true of every birth we know that in our heart of hearts it is the great truth of the birth of our Lord: his birth, as we pray in one of our prayers, is the dawn of our redemption, the moment of recreation when peace overwhelms hatred and life swallows death. I think that all of this is reflected in a particularly beautiful way this year in the story of the two little girls who were brought to Australia in order to be given a new life. The smiles of Krishna and Trishna after their miraculous separation have brought great joy and hope to people all over the world. The twins’ journey from the orphanage in Bangladesh to the triumphant moment of separation at the hospital in Melbourne is a wonderful symbol of the regeneration of life that is given to us through the birth of Jesus Christ. It is an experience which touches our hearts and reveals to us the presence of God in our daily living. The pattern of regeneration that began with the birth of Christ is what gives meaning and direction to our lives, not as a burden but as a response to the graciousness of God. This Christmas, let the faces of Krishna and Trishna be a constant reminder to us of God’s love for us and inspire us to spread "peace and goodwill to all".
The newness that Jesus introduced into the world at his birth is something that gives us hope for our future as humans on earth. And so as we approach the New Year, I offer greetings of peace and hope to all Australians while fully endorsing the Pope’s message for World Peace Day on January 1 and his chosen theme "If you want to cultivate peace, protect creation". Fresh from the climate change meeting in Copenhagen, we pray that world leaders will recognise that creation is the beginning and the foundation of all God’s work and that its preservation has now become essential for the co-existence of mankind. As Pope Benedict said, seeing creation as God’s gift to humanity helps us understand our vocation and worth as human beings. My hope is that ultimately this will also result in people treating each other better and respecting one another in a way that might finally bring about peace on earth.
(SOURCE: http://www.catholic.org.au/index.php?option=com_docman&task=doc_view&gid=944&tmpl=component&format=raw&Itemid=355
TODAY'S SAINT
St. Stephen
PROMARTYR FOR THE CHRISTIAN FAITH
Feast: December 26
Informatio 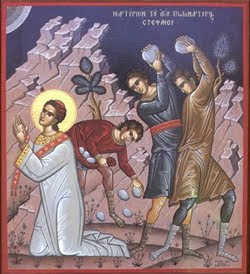