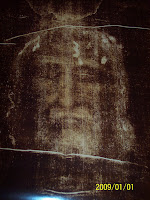 It was announced on that the Pope has confirmed his intention to attend the exposition of the Shroud of Turin, due to take place in that Italian city in the spring of 2010. The Holy Father thus accepts the invitation of Cardinal Severino Poletto, archbishop of Turin with whom he had lunch last Sunday, although the exact date of the trip has not yet been settled...(With files from:VIS 090728 (220)
EUROPE:
BERTONE PROMOTES CARITAS IN VERITATE
Cardinal Bertone spoke to the Italian Senate. He clarified aspects of the text. Bertone showed that the Pope highlighted "the affirmation of the profound reasons behind the dignity of individuals and their rights", and marriage and the family as elements that have forged European identity. The Secretary of State expressed the view that "over and above differences in formation and in personal convictions", the representatives of the Italian people will "find in the Pope's words an exalted and profound source of inspiration when carrying out their mission, and so be able to respond adequately to the ethical, cultural and social challenges of today".(With files from:VIS 090728 (200)
AFRICA
KENYA: FAMINE CONTINUES
The government declared the famine early this year; afflicting 10 million people a national disaster, but the evidence months later indicates that the problem has worsened.This week, the ministers for water and irrigation, agriculture, special programmes, livestock and energy briefed President Mwai Kibaki on the food, water, and energy crisis and discussed measures to address the shortages.Water and Irrigation Minister Charity Ngilu said the government will drill 250 water boreholes across the country, 50 of which will be in Nairobi, to address the acute water shortage. http://www.cisanewsafrica.org/story.asp?ID=4040
ASIA:
CHINESE BISHOP DIES

UCAN reports that retired Bishop Domingos Lam Ka-tseung of Macau, the first Chinese bishop of the 433-year-old diocese, died on July 27. He was 81.

Bishop Lam fell ill in March and was later diagnosed with terminal stomach cancer. He had been hospitalized since May.
Bishop Lam led the diocese, created in 1576 as the first Catholic diocese in the Far East, through Macau's political transition from Portuguese to Chinese rule in 1999. The prelate's funeral is scheduled for July 31. His body will be placed in the Cathedral of the Nativity of Our Lady for people to pay their last respects in the morning, followed by a funeral Mass. Burial will take place at St. Michael the Archangel's cemetery in the afternoon.
Under the leadership of Bishop Lam, Macau diocese has served refugees from East Timor, also a former Portuguese colony, and Filipino workers as well as local Chinese Catholics, and also evangelized new migrants from mainland China.
Bishop Lam, ordained coadjutor bishop of Macau in 1987, the diocese's 22nd bishop the next year. John Paul II accepted Bishop Lam's resignation in 2003, when he turned 75, the age at which canon law requires a bishop to request retirement. Bishop Lai, born in Macau, was appointed the diocese's second Chinese bishop.
Bishop Lam, born in Hong Kong in 1928. He graduated from St. Joseph's Seminary here and was ordained a priest in 1953, after which he managed a parish and taught in a Catholic school and the seminary.
Macau diocese currently has 22 diocesan priests and 40 Religious priests, serving about 20,000 Catholics. It runs a university, 39 schools, 27 social service institutions and 21 other institutions.
(Edited from: http://www.ucanews.com/2009/07/28/first-chinese-bishop-of-macau-dies/
AMERICA
PERPETUAL ADORATION RETURNS TO BOSTON
Perpetual adoration has returned to Boston after a 40-year absence. St. Clement Eucharistic Shrine on Boylston Street will mark the start of adoration with a Mass celebrated by Cardinal Seán P. O’Malley on Aug. 15, the Solemnity of the Assumption.
From then on, the Eucharist will be exposed in a monstrance every day, apart from regularly scheduled Mass times. “Anytime the Lord is present 24-hours a day, seven days a week, people are changed,” said a member of St. Clement. “This is a way to build spiritually and bring people together in prayer.”
Cardinal Richard Cushing made St. Clement into a eucharistic shrine, staffed by the Franciscan Missionaries of Mary, in 1945. The sisters maintained perpetual adoration from 1945 to the late 1960s. The Oblates of the Virgin Mary began staffing the shrine in 1976.
The effort to bring perpetual adoration back to Boston is a direct response to the call of Pope Benedict XVI to have spaces dedicated to prayers for vocations and the sanctity of priests during the Year for Priests which began in June and runs to June 2010. St. Clement’s will be the designated site in the Central Region of the archdiocese.
For more information, to download a sign-up sheet or to donate to the effort, visit the Web site at http://www.adorationboston.org/.
(Edited from: http://www.catholicnewsagency.com/new.php?n=16666
AUSTRALIA
DEACONS CONFERENCE
Cath News Australia reports that more than 50 deacons from across Australia and New Zealand will gather in Pennant Hills, NSW for a National Deacons' Conference from August 6-9, focusing on a theme of "Word, Worship, Service". Among scheduled speakers are Liberal MP Tony Abbott and national living treasure, Fr Frank Brennan.
"The theme really encapsulates the vocation of the permanent deacon and will serve as a great focal point for our distinguished speakers and for our working sessions," said Deacon Peter Olsen, the Chairman of the National Committee of Deacons.
"The ministry of the deacon goes back to the earliest Church communities and we read in the Acts of the Apostles how the Apostles chose seven men as deacons to help them in their ministry of service," he said in a statement.
(Edited from http://www.cathnews.com/article.aspx?aeid=15406
TODAY'S SAINT
St. Samson
BISHOP AND CONFESSOR
Feast: July 28
Born:
490 at south Wales
Died:
565

Bishop and confessor, born in South Wales; died 28 July, 565 (?). His parents were Amon of Dyfed and Anna of Gwynedd. He was ordained deacon and priest. He became an abbot. (With files from: http://www.ewtn.com/saintsHoly/saints/S/stsamson.asp
St. Victor I
POPE
Feast: July 28

(189-198 or 199), date of birth unknown. The "Liber Pontificalis" makes him a native of Africa and gives his father the name of Felix.He reigned as Pontiff from 186-197. (With files from:http://www.ewtn.com/saintsHoly/saints/V/stvictori.asp
SAINTLY QUOTE
O Jesus, if I but considered attentively your immense solicitude for me, how greatly should I not excel in every virtue? Pardon me, O Jesus, so much carelessness, pardon such great ignorance. My God, Jesus my Love, Increated Goodness, what would have become of me if you had not drawn me to yourself? Open your heart to me, open to me your sacramental breast; I open mine to you. St. Gemma Galgani
TODAY'S GOSPEL
Matthew 13: 36 - 43
Then he left the crowds and went into the house. And his disciples came to him, saying, "Explain to us the parable of the weeds of the field."
He answered, "He who sows the good seed is the Son of man;
the field is the world, and the good seed means the sons of the kingdom; the weeds are the sons of the evil one,
and the enemy who sowed them is the devil; the harvest is the close of the age, and the reapers are angels.
Just as the weeds are gathered and burned with fire, so will it be at the close of the age.
The Son of man will send his angels, and they will gather out of his kingdom all causes of sin and all evildoers,
and throw them into the furnace of fire; there men will weep and gnash their teeth.
Then the righteous will shine like the sun in the kingdom of their Father. He who has ears, let him hear.
Posted by Jesus Caritas Est at 9:58 PM