During the Pope's homily in Aosta, he said that if "our relationship with God is not living, if it is not lived, then none of our other relationships can take their correct form. And this also holds true for society, for humankind. Here too, if we do without God, if God is absent, we lack the compass ... to show us the path, the direction we must follow". "We must bring the truth of God back into the world, make Him known", he went on. "Evangelisation consists precisely in the distant God becoming close, in God no longer being far off but near, in this 'known-unknown' finally making Himself known and revealing His face. ... He shows us His face, He enters our world. There is no longer any need to use other powers because He is the true power, the Almighty". The Pope clarified "that God's omnipotence is not an arbitrary power, because God is Good, He is Truth. Hence God can do everything but He cannot act against goodness, He cannot act against truth, He cannot act against love and freedom, because He Himself is goodness, love and true freedom". "God is the custodian of our freedom, of love and of truth. This eye that looks down is not an evil eye watching over us, but the presence of a love that never abandons us". Benedict XVI showed that "the pinnacle of God's power is mercy and forgiveness. In our modern concept of what power is we think of people who possess great property", who can "influence the market. We think of those with great military power, who have the power to threaten. Stalin's question 'how many divisions does the Pope have?' continues to characterise the typical idea of power. Those who have power are dangerous, they can threaten and destroy". "But the Revelation tells us that this is not so. True power is the power of grace and mercy. In His mercy God shows true power". "God has suffered and in the Son suffers with us", said Pope Benedict. "Thus He shows true divine power. He wanted to suffer with us and for us. We are never abandoned in our sufferings". "Why was it necessary to suffer in order to save the world?" the Holy Father asked. "It was necessary because in the world there exists an ocean of evil, of injustice, of hatred and of violence, and the many victims of hatred and injustice have the right to see justice done. ... God must enter into this world and oppose the ocean of injustice with a greater ocean of goodness and love". .. (With files from VIS 090727 (590)

Appointed Cardinal Franc Rode C.M., prefect of the Congregation for Institutes of Consecrated Life and Societies of Apostolic Life, as his special envoy to celebrations marking the millennium of the archdiocese of Alba Julia, Romania, due to take place on 29 September. (With files from: VIS 090727 (550)

MANY KILLED IN CLASH WITH RADICAL GROUP & POLICE

Approximately 42 were were killed yesterday in fights between police and members of a radical Islamic sect in Bauchi. An armed team of the sect's followers attacked a police station in retaliation for the arrests of their leaders, hospital officials and security sources said.
"We have received a total of 42 bodies," Awwal Isa, a nurse at the Bauchi Specialist Hospital told AFP news agency by telephone. He said the corpses were of those involved in the fighting between the police and the radical sect.
A reporter for the Reuters news agency counted 32 bodies at two Bauchi police stations and said dozens were wounded among the more than 200 arrested.
This occurred after a gang of around 60 men armed with guns and hand grenades attacked the Dutsen Tanshi Police Station, but retreated after a gun battle with the police, spokesman for the Bauchi police command Mohammed Barau said.
The police raided the group's neighbourhoods and hideouts around the Bauchi Airstrip, arresting hundreds. Some of the items recovered from the group included army uniforms, boots, explosives and live ammunition.
Nigeria has a population of 137,260,000 and area of 910,768 km². Its major religions are: Muslim 50%, Christian 40%(many Catholics), indigenous beliefs 10%. Its languages are: English (official), Hausa, Yoruba, Igbo (Ibo), Fulani. (With files from:
http://allafrica.com/stories/200907270532.html)


In parts of Bangladesh poverty is common place. The
St. Andrew Bobola Children Center provides assistance for 150 boys. "Over the last 70 years, the center has helped thousands of kids make a better life through academic and moral education," said Father Giovanni Gargano, an Italian Missioner from the Society of St. Francis Xavier for Foreign Missions. Another mission house cares for 50 children and is called the St. Aloysius Orphanage for girls. It is partially run by 10 Catholic widows who also live at the center. The orphanage was established in 1957 and is run by the Sisters of St. Aloysius Gonzaga, popularly known as Luigine Sisters. "These women whom we call Masi (maternal aunt) take care of us well and Sister Irene Cruze, the director, is like a mother to us" said a child. One child relates, "My stepmother didn't treat me well and forced me to come to this orphanage."

These two homes provide food, clothing and medical help. They offer religious classes conducted by priests and nuns. On completing their Secondary School Certificate Examinations (SSC) they return to their parishes. Their parish priests then help them continue their education with financial support from benefactors. (With files & image from:
http://www.ucanews.com/2009/07/27/church-run-centers-give-hope-to-impoverished-kids/
AUSTRALIA
YOUTH MINISTRY DOCUMENT FROM BISHOPS
*The following is the exact text from the Media Release – July 26, 2009
Anointed and Sent: An Australian Vision for Catholic Youth Ministry, launched

Anointed and Sent: An Australian Vision for Catholic Youth Ministry has been hailed as “essential reading for those entering youth ministry” during its launch at the annual gathering of Lay Movements, held on the anniversary of Pope Benedict’s arrival in Sydney for World Youth Day.

Bishop Brian Heenan, who was a member of the former Bishops Committee for Laity which approved the project, said “this resource will be essential reading for those entering Youth Ministry and a useful guide for thinking about youth ministry into the future”.

The launch was included as part of the annual gathering of Lay Movements, an initiative of the Bishops Commission for Church Ministry, which this year took the focus of Church Ministry with Youth. In addressing the participants, Bishop Michael Malone, the Commission Chair, and fashionably dressed as a World Youth Day pilgrim encouraged all movements to celebrate “Youth as a gift to be shared not a problem to be solved.”

The gathering was facilitated by Mr Malcolm Hart, Senior Youth Ministry Project Officer for the Bishops Commission for Pastoral Life, who shared his reflections on the three goals and eight focus areas of the document and recent developments in youth ministry from across Australia.

Mrs Karen Lunney, Youth Ministry Coordinator for the Sandhurst Diocese outlined the journey of many years towards a ratified and published national vision for youth ministry. Initiated by the Australian Network of Diocesan Youth Ministry Coordinators (ANDYMC), the consultation process and subsequent writing of the document was the work of a team of people under the guidance of the Bishops Commission for Pastoral Life.

“I am so pleased to see the final printed document. It has been a marathon effort on behalf of all involved, and will hopefully provide a language with which we can negotiate the youth ministry terrain in a post WYD Australia,” she said.

Bishop Joseph Grech, the Bishops Delegate for Youth on the Bishops Commission for Pastoral Life describes the importance of youth ministry in his introduction to Anointed and Sent.

“We are all in relationship with young people in some way, and each young person is important. Young people are a part of our community and we all need to be active in ministry with them to reflect this,” he said. “There are many strategies for youth ministry that link to this framework, from the national and diocesan level to youth ministry in parishes and schools. I encourage everyone to use Anointed and Sent as a resource for reflection and action, and find ways to meet the goals and the focus areas that fit your community.”

Representing the Bishops Commission for Church Ministry, Bishop Malone, Bishop Heenan and Bishop Finnigan were joined at the gathering by representatives of 16 Lay Movements and organisations including youth movements. A highlight of the gathering was hearing the realities and thoughts from three young people about how to understand and engage youth in the Church.

Anointed and Sent: An Australian Vision for Catholic Youth Ministry will be distributed to parishes and secondary schools around Australia. Additional copies can be can be purchased/ordered through
the Australian Catholic Bishops Conference Youth Ministry website at www.youthministry.catholic.org.au.
Media Contact: Kimberly Davis on 02 6201 9867.Source: http://www.youthministry.catholic.org.au/ 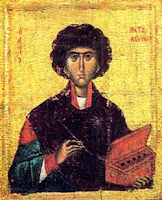 He was a martyr, and died about 305. He was the son of Eustorgius of Nicomedia, and had been instructed in Christianity by his Christian mother, Eubula. He abandoned the Faith, studied medicine and became physician to the Emperor Maximianus. The priest Hermolaus converted him back to Christianity.He was tortured under the Emperor Diocletian for his Faith. His name Panteleemon means the all-compassionate. A phial containing some of his blood has been preserved at Constantinople. On the feast day of the saint the blood is said to become fluid and to bubble. Relics of the saint are to be found at St. Denis at Paris; his head is venerated at Lyons. His feast day is 27 July, also 28 July, and 18 February.(With files from: http://www.ewtn.com/saintsHoly/saints/P/stpantaleon.asp)
TODAY'S SAINTLY QUOTE
To serve the Queen of Heaven is already to reign there, and to live under her commands is more than to govern. St. John Vianney
TODAY'S GOSPEL
Matthew 13: 31 - 35
Another parable he put before them, saying, "The kingdom of heaven is like a grain of mustard seed which a man took and sowed in his field;
it is the smallest of all seeds, but when it has grown it is the greatest of shrubs and becomes a tree, so that the birds of the air come and make nests in its branches."
He told them another parable. "The kingdom of heaven is like leaven which a woman took and hid in three measures of flour, till it was all leavened."
All this Jesus said to the crowds in parables; indeed he said nothing to them without a parable.
This was to fulfil what was spoken by the prophet: "I will open my mouth in parables, I will utter what has been hidden since the foundation of the world."
Posted by Jesus Caritas Est at 2:32 PM