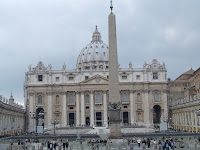 AMERICA
As the Vatican encourages evangelization through media we see many organizations trying to spread the Gospel in the modern age. Catholic Distance University (CDU) is a model for the new evangelization. It was founded in 1983 by Bishop Thomas J. Welsh of the Arlington Diocese. For 25 years they have continued their efforts of education of the Faith.
http://www.cdu.edu/documents/welcome/welcome.html
This university has students from 50 states and 40 countries. http://www.cdu.edu/documents/welcome/history.html
It is located in Hamilton, Virginia, about 50 miles west of Washington, DC. According to their Website their Mission statement is:
Our mission is to educate adults worldwide in the teachings of the Catholic Church through the techniques and technologies of modern distance education, providing both academic degrees and non-credit adult faith formation.
University Motto: Joy From The Truth, gaudium de veritate
The following can be found on the Website of CDU:
Chairman of the Board: The Most Reverend Paul S. Loverde, DD
Contact Information: Our web site can be reached at www.cdu.edu. Contact us at admissions@cdu.edu, 1.888.254.4238 ext. 700 or you can write CDU at 120 East Colonial Highway, Hamilton, VA 20158.
Accreditation: CDU is accredited by the Accrediting Commission of the Distance Education and Training Council (DETC), an accrediting agency fully recognized and approved by the U.S. Department of Education, and is certified as a degree granting institution by the State Council of Higher Education of Virginia (SCHEV). The university's catechetical programs are approved by the Vatican Congregation for the Clergy. The USCCB lists CDU as an approved Catholic college and university offering distance education. The university is a Title IV school recognized by the U.S. Department of Education.
Academic Programs:
Master of Arts in Theology (39 credits) with concentrations in Ecclesial Service, Sacred Scripture, Philosophy/Theology, and Catholic Culture
Bachelor of Arts in Theology completion program (36 credits earned at CDU combined with 90 general electives earned at any accredited college or university)
Catechetical Diploma (36 credits)
Graduate and undergraduate level courses for students not seeking to earn a degree
Continuing Education Programs:
Advanced Catechist Certification (11 continuing education courses)
Continuing education for professional development and adult faith enrichment
Online seminars
Parish Plans
Residency Requirements: There are no residency requirements for any of CDU’s programs.
Average class size: Classes average 10-20 students.
Tuition Rates:
MA programs $390/credit
BA program $239/credit
Undergraduate Catechetical Diploma $239/credit
Advanced Catechist Certification $143/course
Continuing education courses $143/course
Online seminars $143/course
For a complete schedule of tuition and fees
Financial Aid: CDU participates in the tuition assistance programs of all U.S. military services. Program students are eligible to participate in the Sallie Mae private loan programs. Three and four-month payment plans are also available for three-credit courses.
http://www.cdu.edu/documents/welcome/quick-facts.html
ASIA 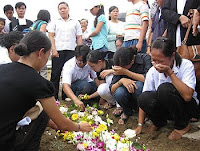 HO CHI MINH CITY, Vietnam (UCAN) -- A brother from the De La Salle Mission died while trying to rescue a girl from a river.

Dominic Phung The Minh , age 28, freed a girl from drowing but perished himself.
The girl, who fell into the Mekong River, survived.

The accident took place July 12, about 50 kilometers south of the Cambodian capital Phnom Penh. The Brother's body was found two hours later and taken to Ho Chi Minh City in Vietnam.
His coffin was laid in a chapel at the congregation's Mai Thon center on July 14. About 200 priests, Religious and lay Catholics prayed and offered incense at the wake. Some acquaintances gave testimony of his life:
"He taught them their lessons and catechism, played games with them and they went fishing together,"
Brother Hiep, 38, said the deceased brother offered poor students scholarships, visited poor families, providing food for them and helped to repair their houses.
"He lived in poverty among poor people and died for them," a tearful Brother Hiep said.
Brother Minh was born on June 25, 1981 in the southern Vietnamese province of Dong Nai. He entered the Christian Brothers school in Ho Chi Minh City in 2000 and began his work with Vietnamese communities in Cambodia in 2006. Since then he had been stationed at Phum Sousom Kosal, Stung Mean Chey and Phnom Penh.
http://www.ucanews.com/2009/07/16/vietnamese-de-la-salle-brother-drowns-while-rescuing-youth/
AFRICA

According to Catholic News Service bishops of Congo have called citizens to become personally involved in the fight against corruption. They call this "one of the bases for the unequal distribution of national resources between the wealthy classes, made up of public authorities, and the majority of the population who live in misery."In a pastoral letter, "Restoration of the Nation by the Fight Against Corruption," the bishops' conference said that, "despite commitments made by the government, we see no real determination of our political leaders to put in place mechanisms to prevent and punish corruption.""The success of this struggle will also depend on the population, urged to abandon its passivity in denouncing corruption and, therefore, to avoid becoming accomplices in an evil of which the people themselves are the first victim," they said. This was made known amid the 49th anniversary of Congo's independence from Belgium, celebrated June 30.As the 50th anniversary approaches, the bishops declared a jubilee year, "a year of renewal and joy, of turning back to God, to put an end to the practices of corruption and sin that are destroying the nation, and to build with God, in justice, a fraternal, prosperous and happy Congo."
Catholics were asked to make "fervent prayer, acts of repentance for the past in order to obtain from God goodness and mercy, an abundance of divine grace, profound and lasting peace brought by the irrevocable advancement toward progress and prosperity for all, without exception." (With files from http://www.catholicnews.com/data/stories/cns/0903245.htm)
FEATURED PRIEST (FOR YEA 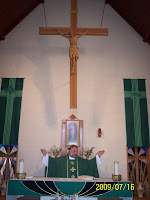 R OF THE PRIEST) 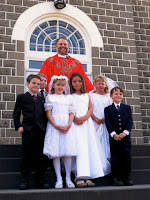 Fr. Burchat was born on January 17, 1966. He is of a family of 4, born to Ben and Helen Burchat. His parents are of Polish descent. He was born in Kingston, ON, Canada. He was batized in St. Patrick's Church, Napanee, ON. He attended Madoc Public School, St. Andrew's, Killaloe, and Madawasca High School in Barry's Bay.
His testimony: With the help of a spiritual director, the women and men of the Madonna House Apostolate, and the quietness of a year away from schooling of any kind, I was enabled to discern the signs of a calling to the priesthood. This would further be tested and clarified in the 8 years of seminary formation at St. Peter’s Seminary in London where I would also receive an excellent intellectual formation in the Catholic heritage of faith. Ordained in my home parish of St. Casimir’s in Round Lake Centre in 1993, I have since enjoyed working in the Lord’s vineyard beside dedicated pastors, religious and faithful.
He spent some time at Madonna House, Combermere, ON. Father John recently graduated with a STL from the Pontifical Faculty of the Immaculate Conception, Dominican House of Studies, Washington, DC. One of his favorite sayings: "Father we trust in your goodness & providence." 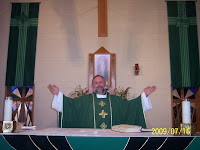 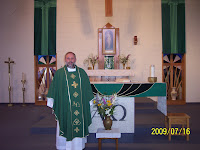 Fr. Burchat in Our Lady of Mercy Parish, Bancroft, ON.

TODAY'S SAINT
Today is the Feast of Our Lady of Mount Carmel. The patroness of the Carmelite Order and the Brown Scapular.
TODAY'S SAINTLY QUOTE
Make yourself familiar with the Angels, and behold them frequently in spirit. Without being seen, they are present with you.--------St. Francis de Sales
TODAY'S GOSPEL

Matthew 11: 28 - 30
Come to me, all who labor and are heavy laden, and I will give you rest.
Take my yoke upon you, and learn from me; for I am gentle and lowly in heart, and you will find rest for your souls.
For my yoke is easy, and my burden is light."