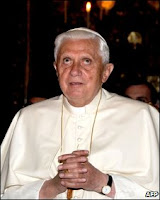 VATICAN
According to Vatican Information Service the Pope's wrist operation was a success. The surgery took place in Umberto Parini hospital in Aosta for a fracture to his right wrist. Benedict XVI fell last night in his chalet while on holiday. The Holy Father had celebrated Mass earlier in the morning before going to the hospital. The doctor said he "underwent an operation to realign the fractured fragments and fasten them through osteosynthesis, using a local anaesthetic then applying a cast. The Holy Father's general condition is good".
(With files from VIS 090717 (120)
MEETING for projects in poor nations
VIS also reports that the annual meeting of the administrative council of the "Populorum Progressio" Foundation is due to be held from 27 to 31 July at the Schwerte Catholic Academy in the archdiocese of Paderborn, Germany, to consider the financing of projects in support of poor indigenous mixed race and Afro-American rural communities of Latin America and the Caribbean.
"These meetings traditionally take place by rotation in the Latin American countries of origin of the members of the administrative council", explains the communique. "Having completed the round, it was decided (also with the aim of giving the Foundation's activities visibility in Europe) to hold the meeting in Germany, country of origin of Cardinal Paul Josef Cordes, president of the Foundation and of the Pontifical Council "Cor Unum". (With files from VIS 090717 (380)
VIS noted the following appointments:
- The Holy Father appointed Fr. Adam Leszek Musialek S.C.I., pastor at Pietermaritzburg in the archdiocese of Durban, South Africa, as bishop De Aar (area 67,248, population 165,500, Catholics 5,824, priests 8, religious 27) South Africa. The bishop-elect was born in Wieruszow, Poland in 1957 and ordained a priest in 1983. He succeeds Bishop Joseph James Potocnak S.C.I., whose resignation from the pastoral care of the same diocese the Holy Father accepted, upon having reached the age limit. (With files from VIS 090717 (90)
ASIA

BOMB ATTACK KILLS 9 IN JAKARTA, INDONESIA
UCAN reports that 2 bomb blasts killed 9 people and injured 50 in Jakarta, Indonesia. Christian leaders have condemned the attacks.
Father Johannes Dwi Harsanto, of Indonesia said, "We pray for the dead and those who are injured. Let us also pray for our nation. May God move the heart of this nation to uphold and maintain peace."
Bombs exploded this morning at 7:45 a.m. at the J.W. Marriott Hotel and at 7:47 a.m. at the Ritz Carlton Hotel.
18 foreigners were among the wounded. In 2003 this same hotel was bombed, killing 12 people.
Indonesia has the world's largest Muslim population. It is not known who committed these attacks.
(With files from: http://www.ucanews.com/2009/07/17/religious-leaders-
condemn-bomb-attacks/ )
AFRICA
Servant of God Benedict Daswa possibly S. Africa's 1st Saint
CISA reports that a Catholic man killed 19 years ago may become South Africa’s first saint. Benedict Daswa has been declared a Servant of God. He belonged to the Lemba tribe who live in the Limpopo Province. He became a Catholic as an adult and spoke against witchcraft. He was stoned and bludgeoned to death on February 2, 1990 due to his opposition to witchcraft. He was 43 years old.
(With files from http://www.cisanewsafrica.org/story.asp?ID=4016)
AMERICA
Norms for Placement of Tabernacle
Catholic.org reports that Bishop J. D'Arcy of Diocese of Fort Wayne-South Bend released the following:
The presence of Jesus Christ in the Blessed Sacrament is at the center of our faith and of the devotional life of our Catholic people. In recent years, the place of the tabernacle in our churches has become a source of controversy. This should not be. The Eucharist, whether we are referring to its celebration or to the place of reservation, should always be a means of unity and communion, and never of division. The place of the tabernacle in our church should reflect our faith in the real presence of Christ, and should always be guided by church documents. My experience is that our people, with their instinct of faith, have always desired that the tabernacle be central and visible. They find it confusing when the tabernacle in their churches is not visible, and if possible, central. Because of my responsibility to foster the devotional life of our people, and to keep it sound, I have asked our Office of Worship to prepare norms for the placement and design of the tabernacle in this diocese. These norms were brought before the Presbyteral Council, the Liturgical Commission and the Environment and Arts Committee. Suitable refinements and improvements were prepared. These norms are promulgated to the Diocese of Fort Wayne-South Bend on June 14, 2009, the feast of Corpus Christi, the Body and Blood of the Lord. They will be effective on Aug. 4, 2009, the feast of St. John Mary Vianney, the patron saint of priests, in whose honor the present Year for Priests has been dedicated by the Holy Father Benedict XVI. I urge all priests to follow these norms carefully and completely, and most importantly — to foster devotion to the Blessed Sacrament. Sincerely yours in our Lord, Most Reverend John M. D’Arcy
(With files from http://www.catholic.org/national/national_story.php?id=34101)
TODAY'S SAINT
St. Leo was Roman. He was ordained a priest and served in St. John Lateran. He became Pope Leo IV in 847 AD. He died on July 17, 855.
SAINTLY QUOTE
Christ beside me, Christ before me, Christ behind me, Christ within me, Christ beneath me, Christ above me. St. Patrick
TODAY'S GOSPEL
Matthew 12: 1 - 8
At that time Jesus went through the grainfields on the sabbath; his disciples were hungry, and they began to pluck heads of grain and to eat.
But when the Pharisees saw it, they said to him, "Look, your disciples are doing what is not lawful to do on the sabbath."
He said to them, "Have you not read what David did, when he was hungry, and those who were with him:
how he entered the house of God and ate the bread of the Presence, which it was not lawful for him to eat nor for those who were with him, but only for the priests?
Or have you not read in the law how on the sabbath the priests in the temple profane the sabbath, and are guiltless?
I tell you, something greater than the temple is here.
And if you had known what this means, `I desire mercy, and not sacrifice,' you would not have condemned the guiltless.
For the Son of man is lord of the sabbath."
Posted by Jesus Caritas Est at 12:06 PM