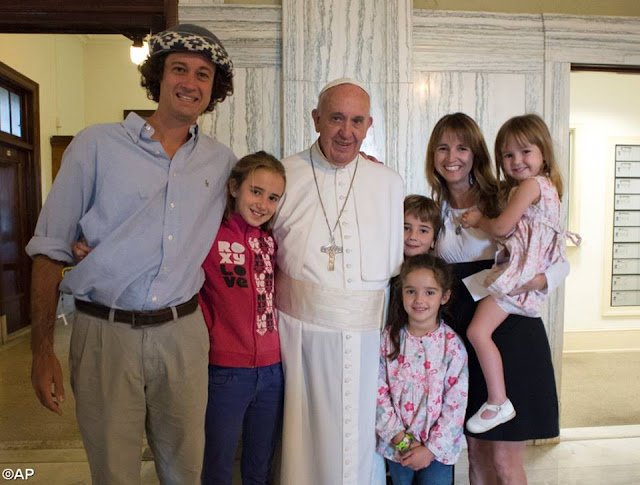 The Walker Family from Argentina that drove 13,000 miles to see Pope Francis (above)

#LatestNews from #Vatican Information Service and #PopeFrancis at #HolySee

Thrones were set up
and the Ancient One took his throne.
His clothing was bright as snow,
and the hair on his head as white as wool;
His throne was flames of fire,
with wheels of burning fire.
A surging stream of fire
flowed out from where he sat;
Thousands upon thousands were ministering to him,
and myriads upon myriads attended him.

The court was convened, and the books were opened.
As the visions during the night continued, I saw

One like a son of man coming,
on the clouds of heaven;
When he reached the Ancient One
and was presented before him,
He received dominion, glory, and kingship;
nations and peoples of every language serve him.
His dominion is an everlasting dominion
that shall not be taken away,
his kingship shall not be destroyed.

War broke out in heaven;
Michael and his angels battled against the dragon.
The dragon and its angels fought back,
but they did not prevail
and there was no longer any place for them in heaven.
The huge dragon, the ancient serpent,
who is called the Devil and Satan,
who deceived the whole world,
was thrown down to earth,
and its angels were thrown down with it.

Then I heard a loud voice in heaven say:
“Now have salvation and power come,
and the Kingdom of our God
and the authority of his Anointed.
For the accuser of our brothers is cast out,
who accuses them before our God day and night.
They conquered him by the Blood of the Lamb
and by the word of their testimony;
love for life did not deter them from death.
Therefore, rejoice, you heavens,
and you who dwell in them.”

Jesus saw Nathanael coming toward him and said of him,
“Here is a true child of Israel.
There is no duplicity in him.”
Nathanael said to him, “How do you know me?”
Jesus answered and said to him,
“Before Philip called you, I saw you under the fig tree.”
Nathanael answered him,
“Rabbi, you are the Son of God; you are the King of Israel.”
Jesus answered and said to him,
“Do you believe
because I told you that I saw you under the fig tree?
You will see greater things than this.”
And he said to him, “Amen, amen, I say to you,
you will see heaven opened
and the angels of God ascending and descending on the Son of Man.”
Posted by Jesus Caritas Est at 8:21 AM No comments: 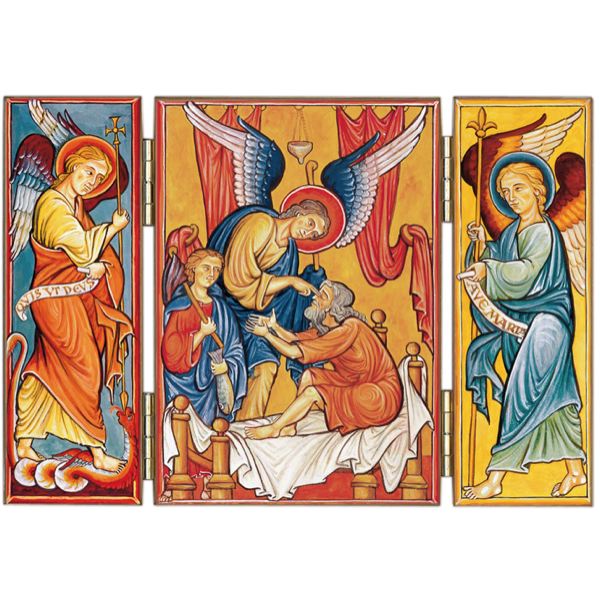 St. Michael the Archangel, loyal champion of God and His people, I turn to you with confidence and seek your powerful intercession. For the love of God, Who made you so glorious in grace and power, and for the love of the Mother of Jesus, the Queen of the Angels, be pleased to hear my prayer. You know the value on my soul in the eyes of God. May no stain of evil ever disfigure its beauty. Help me to conquer the evil spirit who tempts me. I desire to imitate your loyalty to God and Holy Mother Church and your great love for God and people. And since you are God's messenger for the care of his people, I entrust to you this special request: (Mention your request).

St. Michael, since you are, by the Will of the Creator, the powerful intercessor of Christians, I have great confidence in your prayers. I earnestly trust that if it is God's holy Will, my petition will be granted.

Pray for me, St. Michael, and also for those I love. Protect us in all dangers of body and soul. Help us in our daily needs. Through your powerful intercession, may we live a holy life, die a happy death, and reach heaven where we may praise and love God with you forever. Amen.

St. Gabriel the Archangel, I venerate you as the "Angel of the Incarnation," because God has specially appointed you to bear the messages concerning the God-Man to Daniel, Zechariah, and the Blessed Virgin Mary. Give me a tender and devoted Mother, more like your own.

I venerate you also as the "strength from God," because you are the giver of God's strength, consoler and comforter chosen to strengthen God's faithful and to teach them important truths. I ask for the grace of a special power of the will to strive for holiness of life. Steady my resolutions, renew my courage, comfort and console me in the problems, trials, and sufferings of daily living, as you consoled our Savior in His agony and Mary in her sorrows and Joseph in his trials. I put my confidence in you.

St. Gabriel, I ask you especially for this favor: (Mention your request). Through your earnest love for the Son of God-Made-Man and for His blessed Mother, I beg of you, intercede for me that my request may be granted, if it be God's holy Will.

Pray for us, St. Gabriel the Archangel. That we may be made worthy of the promises of Christ.

Let us Pray. Almighty and ever-living God, since You chose the Archangel Gabriel from among all the Angels to announce the mystery of Your Son's Incarnation, mercifully grant that we who honor him on earth may feel the benefit of his patronage in heaven. You live and reign for ever. Amen.

Holy Archangel Raphael, standing so close to the throne of God and offering Him our prayers, I venerate you as God's special Friend and Messenger. I choose you as my Patron and wish to love and obey you as young Tobiah did. I consecrate to you my body and soul,all my work, and my whole life. I want you to be my Guide and Counselor in all the dangerous and difficult problems and decisions of my life.

Remember, dearest, St. Raphael, that the grace of God preserved you with the good Angels in heaven when the proud ones were cast into hell. I entreat you, therefore, to help me in my struggle against the world, the spirit of impurity, and the devil. Defend me from all dangers and every occasion of sin. Direct me always in the way of peace, safety, and salvation. Offer my prayers to God as you offered those of Tobiah, so that through your intercession I may obtain the graces necessary for the salvation of my soul. I ask you to pray that God grant me this favor if it be His holy Will: (Mention your request).

St. Raphael, help me to love and serve my God faithfully, to die in His grace, and finally to merit to join you in seeing and praising God forever in heaven. Amen.
Posted by Jesus Caritas Est at 8:15 AM No comments:

The Sacred Scriptures have revealed the proper names of only three Angels, all of whom belong to the Choir of the Archangels. The names are well known to all, namely: Michael, Gabriel, Raphael. Ancient apocryphal literature of the Old Testament contains several other names of Archangels in addition to the three just mentioned. Like the sources themselves, these other names are spurious. Names like Uriel, Raguel, Sariel, and Jeremiel are not found in the canonical books of Sacred Scripture, but in the apocryphal book of Enoch, fourth book of Esdras, and in rabbinical literature. The Church does not permit proper names of Angels that are not found in the canonical books of the Bible. All such names that were taken from apocryphal writings were rejected under Pope Zachary, in 745. There must have been danger of serious abuses in this regard during that century, because a similar step was taken in a synod held at Aix-la-Chapelle in 789.
THE ARCHANGEL MICHAEL
Michael from the Hebrew

SOURCE http://www.ewtn.com/saintsHoly/saints/A/archangels.asp
Posted by Jesus Caritas Est at 7:53 AM No comments:

Pope Francis greets well-wishers at the Papal Basilica of Saint Mary Major. - AP
28/09/2015 12:
(Vatican Radio) Pope Francis visited the Papal Basilica of Saint Mary Major on Monday, after his arrival at Rome’s Ciampino Airport. The Pope had just concluded a 10-day Apostolic Voyage to Cuba and the United States.
The Holy Father brought flowers to put before the image of “Salus Populi Romani”,  a Byzantine icon of the Madonna and Child located in the Basilica’s Pauline Chapel.
Pope Francis traditionally visits the icon before and after each of his Apostolic trips.
On Monday, several people were waiting for the Pope’s arrival, and he greeted and waved at them. He had avoided the photographers before his departure on Saturday, 19 September, by visiting the icon the previous evening.
Posted by Jesus Caritas Est at 4:11 AM No comments: 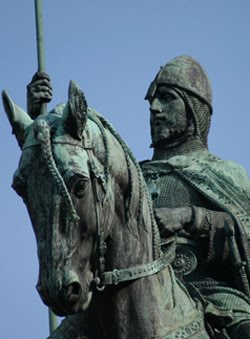 Duke, martyr, and patron of Bohemia, born probably 903; died at Alt-Bunzlau, 28 September, 935.
His parents were Duke Wratislaw, a Christian, and Dragomir, a heathen. He received a good Christian education from his grandmother (St. Ludmilla) and at Budweis. After the death of Wratislaw, Dragomir, acting as regent, opposed Christianity, and Wenceslaus, being urged by the people, took the reins of government. He placed his duchy under the protection of Germany, introduced German priests, and favoured the Latin rite instead of the old Slavic, which had gone into disuse in many places for want of priests. Wenceslaus had taken the vow of virginity and was known for his virtues. The Emperor Otto I conferred on him the regal dignity and title. For religious and national motives, and at the instigation of Dragomir, Wenceslaus was murdered by his brother Boleslaw. The body, hacked to pieces, was buried at the place of murder, but three years later Boleslaw, having repented of his deed, ordered its translation to the Church of St. Vitus in Prague. The gathering of his relics is noted in the calendars on 27 June, their translation on 4 March; his feast is celebrated on 28 September.

SOURCE http://www.ewtn.com/saintsHoly/saints/W/stwenceslaus.asp
Posted by Jesus Caritas Est at 4:01 AM No comments:

#LatestNews from #Vatican Information Service and #PopeFrancis at #HolySee 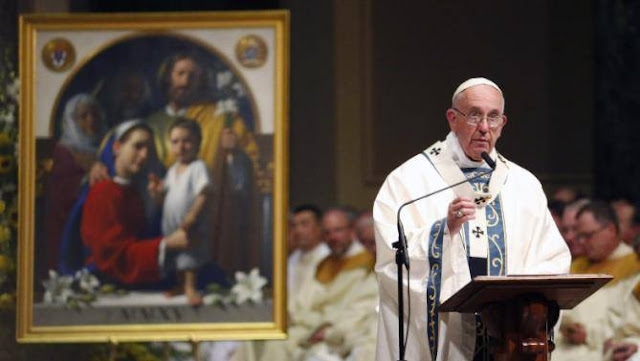 Posted by Jesus Caritas Est at 8:02 AM No comments:

Email ThisBlogThis!Share to TwitterShare to FacebookShare to Pinterest
Older PostsHome
Subscribe to: Posts (Atom)
Posted by Jesus Caritas Est at 11:32 AM