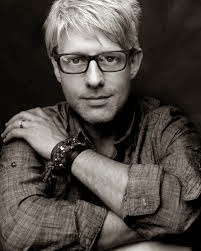 POPE FRANCIS "Christian humility is telling the truth: ‘I am a sinner’."

POPE FRANCIS see the figure of Christ present in the poor, the suffering, the unwanted children...

Canadian singer Matt Maher released a new video for his single "All the People Said Amen." In this song, Maher shows that the Catholic Church to a collage of cultures, races and social classes. MATT MAHER "I think God takes these pieces from all these walks and areas of life and they're called people, and he puts them together, and he creates a work of art so that the world looks and says 'man, that's beautiful.' Thats's why I wanted to make this record. That's why I wanted to capture the Church singing these songs that I've written from different seasons and periods in my life, and to put it all together, just to help remind people that we are all part of a really big work of art." The album was nominated for a 2014 Grammy for Best Christian Music Album. In his 10 year career, the singer has released six albums.In 2014, Matt Maher will tour the United States and give 12 concerts. Please Share!

FOR BREAKING NEWS AND INSPIRATIONAL STORIES AND FREE MOVIES
LIKE US ON FACEBOOK NOW http://www.facebook.com/catholicnewsworld
Posted by JesusCaritasEst at 11:28 AM No comments: Links to this post

POPE FRANCIS "Christian humility is telling the truth: ‘I am a sinner’."

(Vatican Radio) Our salvation is not just in observing the Commandments, but in the humility to always feel the need to be healed by God. This was the message voiced by Pope Francis during Mass on Monday morning at the Casa Santa Marta.

Pope Francis’ homily on Monday found inspiration in these words that Jesus addressed to his fellow citizens in Nazareth: “No prophet is accepted in his hometown”. It was a place where he never worked miracles because “they had no faith”. Jesus recalls two biblical episodes: the miracle of the healing of the leper Naaman, and the meeting of the prophet Elijah with the widow of Serapta who shared her last morsel of food and was saved from famine. “Lepers and widows – Pope Francis explained – in those days were the outcasts of society”. And yet, these two outcasts, welcomed the prophets and were saved, while the people of Nazareth did not accept Jesus because “they felt so strong in their faith”, so sure of their faithful observance of the Commandments, they felt they had no need for other salvation”.

“It is the tragedy of observing the Commandments without faith: ‘I save myself because I go to the Synagogue every Saturday, I try to obey the Commandments, I do not want to hear that the leper or the widow is better than me!’ They are outcasts! And Jesus tells us: ‘if you do not put yourself on the margins, if you don’t feel what it is to be an outcast, you will not obtain salvation’. This is humility, the path of humility: to feel so marginalized that we need the Salvation of the Lord. He alone saves us, not our observance of the law. And they did not like this; they were angry and wanted to kill him”.
The Pope observed that this was the same anger initially felt by Naaman, because he felt that Elisha’s invitation to wash himself seven times in the Jordan was ridiculous and humiliating. “The Lord asked him for a gesture of humility, He asked him to obey like a child, to be ridiculous”. Namman turned and went off in a rage, but afterwards his servants convinced him to do what the prophet asked of him. That act of humility healed him. “This is the message for today – the Pope said - in this third week of Lent: if we want to be healed, we must choose the road of humility”.

"In her Canticle Mary does not say she is happy because God was looking to her virginity, to her kindness or to her sweetness – all of them virtues that she possessed – no: because the Lord was looking to her humility, the humility of His servant, her smallness. This is what the Lord looks for. And we must take heed of this wisdom and put ourselves on the margins so that the Lord may find us. He will not find us at the center of our certainties. That is not where the Lord looks. He will find us on the margins, in our sins, in our mistakes, in our need for spiritual healing, for salvation; that is where the Lord will find us”.
“This – Pope Francis highlighted – is the path of humility”:

“Christian humility is not within the virtue of saying: ‘I am not important’ and hiding our pride. No, Christian humility is telling the truth: ‘I am a sinner’. Tell the truth: this is our truth. But there is another truth: God saves us. He saves us when we are on the margins; He does not save us in our certainties. Let us ask for the grace of having the wisdom to put ourselves on the margins, for the grace of humility so that we may receive the Lord’s Salvation”.

POPE FRANCIS see the figure of Christ present in the poor, the suffering, the unwanted children...

(Vatican Radio) Pope Francis praised members of the Pontifical Council for Healthcare Workers for their support to the sick, the disabled and the elderly. His remarks came in an address to participants attending the Council’s plenary meeting currently underway in the Vatican.

Pope Francis told the participants that when we suffer we are never alone because God in his merciful love for us embraces even the most inhuman situations in which the image of the Creator present in every person appears blackened or disfigured. That was what it was like, he said, for Jesus during his Passion who took on every human suffering, every anguish, out of his love for us.
The Pope said Jesus’s Passion is the greatest school for whoever would like to dedicate their lives to caring for their sick and suffering brothers and sisters. Experiencing the sharing of this fraternal love for the suffering opens us to the true beauty of human life including its fragility.

The Pope reiterated that when caring for life, we must recognize the dignity and value of every single human being, from conception until death. Mary, he continued, welcomed life on behalf of us all and for the advantage of all and has very close personal links with the Gospel of Life.

Pope Francis concluded his address by urging the participants to see the figure of Christ present in the poor, the suffering, the unwanted children, in people with physical and psychic disabilities and in the elderly. 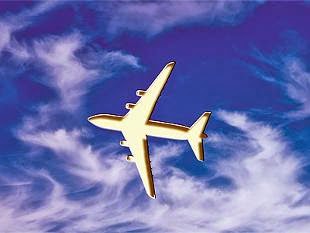 Malaysia Airlines Flight 370 went down over the southern Indian Ocean, Malaysian Prime Minister Najib Razak said Monday, A new analysis of satellite data by a British satellite company and accident investigators was made. The plane's last position was in the middle of the remote southern Indian Ocean.Malaysia Airlines Flight MH370 The airline sent a text message to relatives saying it "deeply regrets that we have to assume beyond any reasonable doubt that MH 370 has been lost and that none of those onboard survived." "Please lift all the loved ones of MH370 with your good thoughts and prayers," the Facebook page said. Australian officials said they had found two objects in the southern Indian Ocean from the flight, The plane has been missing since March 8 with 239 people aboard. Two thirds of the passengers were from China. Please pray for the victims and the families. RIP
Posted by JesusCaritasEst at 8:09 AM No comments: Links to this post 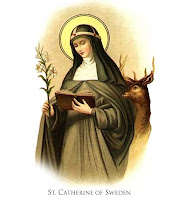 St. Catherine of Sweden
CO-FOUNDRESS OF THE BRIGITTINES, DAUGHTER OF ST. BRIGID OF SWEDEN
Feast: March 24

source: http://www.ewtn.com/saintsHoly/saints/C/stcatherineofsweeden.asp#ixzz1q269PON6
Posted by JesusCaritasEst at 4:32 AM No comments: Links to this post