VIS REPORTS: SOLIDARITY IS THE DRIVING FORCE FOR INTEGRAL DEVELOPMENT

The Holy Father addressed the diplomats as a group, focusing his remarks on the theme of solidarity as a mainstay for the integral development of peoples.

"In our time the unity of the human family is an undeniable fact", the Holy Father explained. "Thanks to the communications media which bring all regions of the planet together, transport which facilitates human contacts, commercial ties which make economies interdependent, and problems of global importance such as environmental protection and mass migration, human beings have become more aware of their shared destiny. ... Mankind must see this interdependency not as a threat but as an opportunity. We are all responsible for one another, therefore it is important to maintain a positive vision of solidarity because it is the driving force of integral human development".

In this context, Benedict XVI highlighted "intergenerational solidarity" which has its roots in the family. Concern for education and for the destiny of future generations is "a significant contribution to the perception of the unity of the human race", he said.

"Shared responsibility" for the good of humankind is not opposed to cultural and religious diversity, the Holy Father went on. "The pluralism of cultures and religions does not contradict the joint search for truth, goodness and beauty. ... The Church, illuminated and upheld by the light of the Revelation, encourages men and women to entrust themselves to a reason which, purified by faith, ... becomes capable of seeing beyond partisan interests in order to discern the universal good necessary to all human beings: social and religious harmony and peace. These are goals for which everyone strives and which require not just an appropriate legislative framework, but also the high moral stature of all citizens, because solidarity has two complementary aspects: social principle and moral virtue".

Solidarity fulfils its role of "social virtue" when it is founded on "structures of subsidiarity and on each individual's firm and unrelenting determination to work for the common good. ... The new challenges your countries are facing require a mobilisation of human intellect and creativity, in order to fight against poverty and to make a more effective and rational use of available resources and energy. ... Increasing people's sense of responsibility also involves protecting human dignity against any attempt to circumscribe it".

"Justice and solidarity", the Pope concluded, "cannot be separated from the concept of the integral development of the person. In this sense, highlighting the primacy of the spirit is not only the responsibility of religions, but also of States which must implement cultural policies that promote universal access to the things of the spirit, emphasise the importance of social relationships and never hinder human beings in their free search for spirituality".
CD/ VIS 20111215 (550)

- Cardinal Andre Vingt-Trois, archbishop of Paris and president of the Conference of Bishops of France, accompanied by Archbishop Laurent Ulrich of Lille and Archbishop Hippolyte Simon of Clermont, vice presidents, and by Msgr. Antoine Herouard, secretary general.

- Yves Gazzo, head of the delegation to the Holy See of the Commission of the European Communities, on his farewell visit.
AP/ VIS 20111215 (90)

Sister Elisha with colleagues after the verdict
A court today freed Sister Mary Elisha of the Missionaries of Charity, who was arrested on the allegation of child trafficking, after the attorney general said an investigation had proved she is innocent and her service is genuine.

“I forgive all who are responsible for putting me in jail,” said Sr. Mary Elisha after she left the court.

Officials of the National Child Protection Authority (NCPA), who raided the Prem Nivasa orphanage for young unwed mothers and babies run by the Sisters on November 23 and arrested its superior nun Sister Elisha two days later, told the court they had not found any illegal activities committed by the nuns.

The NCPA’s sub inspector Sheela said investigations have been conducted by three separate state security institutions, all proving the home is a legally run institution.

A magistrate ordered the release of the nun and the return of all documents including her passport.

Police acting for the NCPA arrested the nun and imprisoned her. She was later released on bail but prevented from visiting the home.

“The NCPA should have taken due regard of the confidentiality of the institution and in this particular instance it had been damaged,” said Father Noel Dias, senior attorney and Vice Judicial Vicar of the archdiocese of Colombo.

“The arrest is illegal and the undue publicity given has caused immense hardship to the nuns concerned and also to the entire Catholic Church,” said Neville Abeyratne, a Catholic attorney who defended the nun.

“The outcome of this case has proved that the sisters are doing a humanitarian service and they are not interested in taking any action against NCPA due to their mission to serve the needy,” said Abeyratne.

A large number of priests, nuns and civil rights activists gathered to witness the proceedings and organized a thanksgiving prayer service after she was set free.

Father Rohan Silva, the Provincial of the Oblate of Mary Immaculate (OMI) Congregation in Sri Lanka who was in court in support of the nun said: “The world has come to know what the sisters have been doing specially for the poor, the downtrodden, the rejected and the unloved in the country.”

A government media spokesman said that the minister of child development has already apologized for any possible mistakes in the handling of the case.
http://www.ucanews.com/2011/12/15/nun-set-free-without-charges/
Posted by JesusCaritasEst at 5:56 PM 0 comments


In the spirit of the new evangelization many are holding spontaneous prayer get togethers in large open areas among crowds. Some Parishioners of Parish The parishoners of St Raymond Church of California held an "Occupy Christmas" event. A group gathered, prayed and sang hymns in front of the Blessed Sacrament. This occasions are truly an opportunity to evangelize and witness to the love of Jesus.
Posted by JesusCaritasEst at 5:41 PM 0 comments 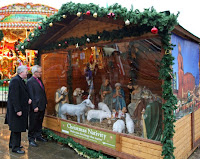 Archbishop Bernard Longley of Birmingham warmly commended the Nativity Trail, the traditional story of Christmas as depicted by artists over 500 years, at the official launch at Birmingham Museum and Art Gallery on Tuesday, November 29, writes Peter Jennings.

This year, for the first time, a large Christmas crib has been placed in a prominent place near the statue of Queen Victoria, opposite the main entrance to Birmingham Council House, in the midst of the thriving annual German Christmas market.
Prior to the launch of the Nativity Trail, Rita McLean, head of Museum Heritage Services, and Victoria Osborne, Curator of Fine Art, showed the group of churchmen and city councillors round.

The Very Reverend Catherine Ogle, Dean of Birmingham, together with a number of Catholic priests and Anglican clergy, were among the visitors in the crowded Round Room who enjoyed a selection of popular carols sung by children from two local Catholic schools.

The Nativity Trail this year includes the following masterpieces depicting the Christmas story: The Star of Bethlehem (1887-1891) by Edward Burne-Jones (Gallery 14), The Annunciation (1858) by Arthur Hughes (Gallery 18), The Adoration of the Shepherds (c 1520-40) by Bonifazio de’Pitati, called Veronese (Gallery 26) and The Rest on the Flight into Egypt (1615-20) by Orazio Gentileschi (Gallery 25).

The Nativity Trail is open to the public.
http://www.catholicherald.co.uk/catholiclife/2011/12/15/archbishop-supports-art-trail/
Posted by JesusCaritasEst at 5:40 PM 0 comments 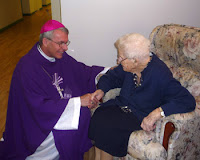 The visit was organised by the Eucharistic Ministers of St Therese's Parish Essendon. The tremendous support of the staff at the facility enabled a large number of both ambulatory and incapacitated residents to attend.

After Mass Bishop Tim visited a number of residents who were unable to be moved to the chapel.

Bishop Tim thanked the staff for their assistance and support.

Life Style Co-ordinator Ms Judy McNaughton thanked Bishop Tim for his attendance on behalf of Arcadia, noting that more than 50 per cent of the residents are Catholic and are visited by Ministers of the Eucharist and receive Communion every Friday. A mid week rosary is also organized by Life Style Co-ordinator, Jacinta, which over 30 residents attend.

Every effort is made by the facility to ensure that all residents religious requirements are met.

According to AFP reports the cardinal said, “The results announced by the CENI (Independent National Electoral Commission) on December 9 comply with neither truth nor justice.”

The CENI said that Kabila had won the polls with 49 percent of the vote. Runner-up Etienne Tshisekedi, who took 32 percent, rejected the result and declared himself president.

International election monitors from the Carter Center, a non-profit group founded by former US president Jimmy Carter, said the counting process was so flawed the result lacked credibility.

Cardinal Monsengwo appealed to Tshisekedi and the other 10 defeated presidential candidates to take their grievances to the Supreme Court, a move Tshisekedi has rejected.

He called on the court, which is charged with hearing election disputes and declaring the official winner on December 17, to act impartially.

The cardinal further said that the court “is called by all Congolese people to say what is really right.”
http://www.cisanewsafrica.com/
Posted by JesusCaritasEst at 5:08 PM 0 comments


Luke 7: 24 - 30
24 When the messengers of John had gone, he began to speak to the crowds concerning John: "What did you go out into the wilderness to behold? A reed shaken by the wind?
25 What then did you go out to see? A man clothed in soft clothing? Behold, those who are gorgeously appareled and live in luxury are in kings' courts.
26 What then did you go out to see? A prophet? Yes, I tell you, and more than a prophet.
27 This is he of whom it is written, `Behold, I send my messenger before thy face, who shall prepare thy way before thee.'
28 I tell you, among those born of women none is greater than John; yet he who is least in the kingdom of God is greater than he."
29 (When they heard this all the people and the tax collectors justified God, having been baptized with the baptism of John;
30 but the Pharisees and the lawyers rejected the purpose of God for themselves, not having been baptized by him.)
Posted by JesusCaritasEst at 5:05 PM 0 comments


Information:
Feast Day: December 15
Born: November 6, 1813, Brescia, Italy
Died: 1855, Brescia, Italy
Canonized: 12 June 1954 by Pope Pius XII
Foundress of the Handmaids of Charity of Brescia, also called the Servants of Charity. Born into a wealthy family in Brescia, Italy, on November 6, 1813, by age seventeen she was running her father's household and caring for the girls in her father's mill and estate. In the cholera epidemic of 1836, she became well-known as she directed a home for girls and begame another residence for deaf and mute young ladies. In 1840, she became superior of a community that evolved into her congregation. The women of the Servants of Charity ministered to the wounded on the battlefields of northern Italy and in hospitals. Maria died at Brescia on December 15. She was canonized in 1954.
Posted by JesusCaritasEst at 6:08 AM 0 comments