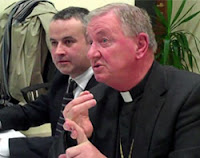 St Ignatius' Church at Norwood, SA, according to a media statement.
Fr McLain's background includes a remarkable US military career spanning more than two decades, during which he completed postings to war-ravaged regions including Afghanistan, Kosovo and West Africa.
Before that, he pursued an interest in video game software, working for Nintendo, where he helped develop the globally-acclaimed Super Mario Bros 3.
Fr McLain was ordained a Jesuit Priest in 1998. He holds a theology degree at Boston College and attended Harvard University, Massachusetts, where he coached the ski team. He has also completed Bachelor degrees in philosophy, as well as radio and television broadcasting production.
His education experience comprises roles with several American Jesuit high schools and most recently at St Aloysius College in Sydney.
"St Ignatius' College provides a first-class Jesuit Catholic education with an emphasison developing caring, well-rounded people," Fr McLain said.
"I'm looking forward to helping students develop their unique talents as they continue their journey to become men and women of competence, conscience and compassion." (SOURCE: http://www.cathnews.com/article.aspx?aeid=19338

Claude de la Colombiere is best known for his association with St. Margaret Mary Alacoque and the devotion of the Sacred Heart, but his life has its own drama. He was sent to England after his spiritual direction of St. Margaret Mary was over and became embroiled in the Titus Oates "Popish Plot," was imprisoned, then banished from England. His story is part of the history of the seventeenth century. He was born near Lyons in 1641 and entered the Society of Jesus at Avignon. After his novitiate, he taught grammar and the humanities. Even before his ordination to the priesthood, he gained a reputation as a preacher. After completing his studies in Paris, he became tutor to the sons of Colbert, the financial minister of Louis XIV, but was dismissed from his post and returned to Avignon.
In 1675, after his solemn profession as a Jesuit, he was appointed superior at Paray-le-Monial, in which the convent of St. Margaret Mary was located. Here he became her spiritual director, encouraged her in the spread of the devotion to the Sacred Heart, and was described by our Lord as His "faithful and perfect friend."
Because of his remarkable gifts and judgment, he was sent to England, to be court preacher to the duchess of York, wife of the future James II, and took up residence in London. His radiant personality and splendid gifts were noted by everyone. When the alleged "Popish Plot" to assassinate King Charles II shook the country, Blessed Claude was accused of complicity in the plot and imprisoned. Through the intervention of Louis XIV of France, he was released, then banished from the country. He spent his last years at Paray-le-Monial, his health broken.
He died on February 15, 1682, an apostle of the devotion to the Sacred Heart, and was beatified in 1929.
Thought for the Day: Blessed Claude was an amazingly gifted man, and he recognized that his gifts should be put at the service of others. He spent himself in the service of Christ and was chosen to direct someone with an important mission to the Church. Let us emulate Claude and place our gifts at the service of others.
From 'The Catholic One Year Bible': . . . "Come, follow me! And I will make you fishermen for the souls of men!" At once they left their nets and went along with him.-Mark 1:17-18
(SOURCE: http://www.ewtn.com/saintsHoly/saints/C/stclaudedelacolombiere.asp
TODAY'S GOSPEL
Mark 8: 11 - 13
11
The Pharisees came and began to argue with him, seeking from him a sign from heaven, to test him.
12
And he sighed deeply in his spirit, and said, "Why does this generation seek a sign? Truly, I say to you, no sign shall be given to this generation."
13
And he left them, and getting into the boat again he departed to the other side.
Posted by Jesus Caritas Est at 11:59 AM