According to him, growth can be accelerated if the universities, both public and private, are better endowed, to enable them produce the manpower to manage the technology.
On his part, Most Rev. Charles Gabriel Palmer-Buckle, Metropolitan Archbishop of Accra, encouraged the graduates to give full and unalloyed service to their employers, be it government, state, or private business providers, whose money would be used to pay their salaries.
He urged the graduates to be guided by the image and likeness of God that gives dignity and self-esteem, and an inalienable human right to be able to swim in today's corruption infested sea of life.
http://allafrica.com/stories/201002190566.html
EUROPE
ENGLAND: PIANIST INSPIRED BY ST. PETER
Catholic Herald report:

ASIA
BANGLADESH: CHRISTIAN STUDENT KILLED BY THIEF
Asia News report:
A gang of thugs attacked Rema Amit, 26, and a friend who was in his company. The spoils of harvest is a phone and 70 cents. Police have already identified and arrested the members of the group.
Dhaka (AsiaNews) - An armed gang has killed one tribal Christian student and injured a friend, to steal a phone and a tally of less than one euro. The two young men were on their way home from festivities for the 100th anniversary of St Joseph's Catholic Church, located in the district of Netrokona - Dhaka Division - about 173 km from the capital. The police confirmed the identification and arrest of all members of the group involved in the murder.
The incident occurred on 15 February in Mohammadupur, division of Dhaka. Rema Amit, 26, a student of the Institute of Science and Technology at Dhanmondi in the company of his friend Sohag, had just got off the bus, returning from the festivities for the Jubilee of St. Joseph Church. On the wayhome, in East Raja Bazar (Dhaka), the two friends were attacked by a group armed with knives and pistols, who ordered them to hand over money and valuables.
At the young men’s refusal, the assailants struck them with a large knife and then stole their money which amounted to a total of 70 taka (about 70 euro cents) and their mobile phones. Sohag, the survivor, said that "the group followed us, in a private car" and attacked them "near Amit’s home."
A police patrol on the spot immediately intervened arresting one of the assailants, Sujan (aka Monir) 24, who was in possession of a large knife. A few hours later the agents stopped the three other members of the gang, Habib, 24, Ershad alias Munna, 26, and Monirul, 25, seizing a pistol and ammunition.
http://www.asianews.it/news-en/Dhaka,-Christian-student-killed-for-less-than-a-dollar-17677.html

AUSTRALIA
REJOICING OVER CONFIRMATION OF MACKILLOPS PENDING SAINTHOOD
Cath News report: Sister Maria Casey, who led Mary MacKillop's sainthood campaign, was among those who attended last night's historic meeting in Rome.
"Never in my wildest dreams did I think I would be the one who would see it through to the end,'' said Sister Maria.
"It's a rare privilege indeed.''
Holy See ambassador Tim Fischer said: "This is a terrific salute to an outstanding Australian, a giant leader in education and many other fields.''
About 100 people were invited to last night's gathering at the Apostolic Palace, the Pope's official residence overlooking St Peter's Square in Vatican City.
The group included dozens of Rome cardinals instructed to dress in full regalia for the ceremony, broadcast live on television for the first time in the church's history.
Bishops and key figures in the sainthood process such as Sister Maria were also present, with the ceremony held in Latin and including prayers and hymns.
Five other candidates from Canada, Poland, Spain and Italy will also be made saints at the same service on October 17. http://www.cathnews.com/article.aspx?aeid=19525 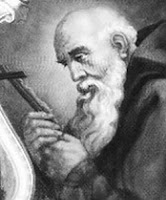 Hermit of the Third Order of St. Francis, date of birth uncertain; died at Noto in Sicily, 19 February, 1351. He belonged to one of the noblest families of Piacenza, and having married when he was quite young, led a virtuous and God-fearing life. On one occasion, when he was engaged in his usual pastime of hunting, he ordered his attendants to fire some brushwood in which game had taken refuge. The prevailing wind caused the flames to spread rapidly, and the surrounding fields and forest were soon in a state of conflagration. A mendicant, who happened to be found near the place where the fire had originated, was accused of being the author. He was imprisoned, tried, and condemned to death. As the poor man was being led to execution, Conrad, stricken with remorse, made open confession of his guilt; and in order to repair the damage of which he had been the cause, was obliged to sell all his possessions. Thus reduced to poverty, Conrad retired to a lonely hermitage some distance from Piacenza, while his wife entered the Order of Poor Clares. Later he went to Rome, and thence to Sicily, where for thirty years he lived a most austere and penitential life and worked numerous miracles. He is especially invoked for the cure of hernia. In 1515 Leo X permitted the town of Noto to celebrate his feast, which permission was later extended by Urban VIII to the whole Order of St. Francis. Though bearing the title of saint, Conrad was never formally canonized. His feast is kept in the Franciscan Order on 19 February.

TODAY'S GOSPEL
Matthew 9: 14 - 15
14
Then the disciples of John came to him, saying, "Why do we and the Pharisees fast, but your disciples do not fast?"
15
And Jesus said to them, "Can the wedding guests mourn as long as the bridegroom is with them? The days will come, when the bridegroom is taken away from them, and then they will fast.
Posted by Jesus Caritas Est at 4:31 PM