VATICAN
POPE: SPEAKS ON RIGHTS OF HUMAN LIFE
Pope Benedict XVI on Saturday spoke to members of the Pontifical Academy of Life. He said that the rights which guarantee the dignity of the human person should be applied to the first moments of human life, when the person is at is weakest.He said the dignity of human life comes from God, and scientists working in the fields involving bioethics should never imagine what they hold in their hands is only easily manipulated inanimate matter. The Holy Father said the Church always affirms the natural law should be a barrier to any state legislating against the dignity of life.
POPE: VISITS MAJOR ROMAN SEMINARY AT ST. JOHN LATERAN
Pope Benedict XVI visited the Major Roman Seminary at St. John Lateran on Friday evening for prayer and dinner to celebrate with the seminarians the feast of their patroness. Addressing the gathering, the Pope emphasized the need to apply the "dynamism" of the missionary to the practice of their faith and to live it with joy.The Holy Father was joined by all of the seminarians from the Diocese of Rome for his visit, which was held on the eve of the feast of Our Lady of Trust, the seminary's patroness. As reported in L'Osservatore Romano, in his reflections during the Lectio Divina with the seminarians, Benedict XVI emphasized that Christ, in giving himself for us, also gave us "the novelty of the gift."This, said the Holy Father, is how "God made himself known" and "showed himself in the face of Christ."Pope Benedict explained that God is "true omnipotence." In Him and in His suffering out of love for us, we observe that the missionary aspect is not something exterior to the faith, but is “the dynamism of faith itself." Those who come to know Jesus are also privy to the joy that comes from sharing Him with others, he told the seminarians."If one has found joy," the Holy Father added, "he has found everything and sees everything in the light of divine love."The Holy Father elaborated that this joy must have its base in a sound spiritual life that is nurtured by prayer at all times."We must learn to pray for the great reality, for the divine reality, because He gives himself to us, he gives his Spirit and that's how we can respond to the demands of life and help others in their suffering."L'Osservatore Romano reported that the papal visit marked the first time that seminarians from all of the diocese's five seminaries had gathered to celebrate the vigil of the feast of the Major Seminary's patroness together. There were about 200 seminarians in attendance along with rector Msgr. Giovanni Tani, Cardinal Vicar General for the Diocese of Rome Agostino Vallini and other representatives from the diocese, the seminaries and the Papal Household. http://www.catholicnewsagency.com/news/pope_tells_romes_seminarians_to_apply_missionary_dynamism_to_faith_life/
AMERICAS
COSTA RICA: NEW PRESIDENT IS CATHOLIC & PRO-LIFE
Catholic ONline report: Laura Chinchilla gives us hope. It is time to run Pro-Life, Pro-Family and Pro-Freedom candidates for public office.
President - elect of Costa Rica Laura Chinchilla and Archbishop Hugo Barrantes Urena. 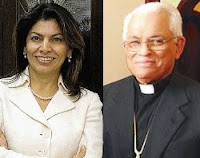 are required to do this. Our ad limina began in the final days of January. "It's my first, and there is plenty to do to fill the ten days of the visit. We present detailed reports about our dioceses and Catholic life, describing parish life, schools and ministries, and all the diverse activities and priorities. We record the changes and developments in recent years and reflect on our plans and vision for the future."The bishops are invited to visit the various congregations in Rome, each of them dealing with different aspects of faith in Church and Society." The Bishops of England and Wales celebrated Mass at the Venerable English College in Rome. Archbishop Patrick Kelly of Liverpool gave the homily in which he said: "To every priest; and everyone open to formation for ordination, the martyrs' picture insists: priest and victim. I am grateful that in my own years of formation priest and victim were spoken in one breath. It is a cause of great harm that the word victim tended to disappear, especially in debates about who may be called to ordination: words such as right, power, set apart, do not sit easily with the Lamb of Go 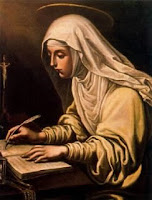 TODAY'S GOSPEL
Mark 8: 1 - 10
1
In those days, when again a great crowd had gathered, and they had nothing to eat, he called his disciples to him, and said to them,
2
"I have compassion on the crowd, because they have been with me now three days, and have nothing to eat;
3
and if I send them away hungry to their homes, they will faint on the way; and some of them have come a long way."
4
And his disciples answered him, "How can one feed these men with bread here in the desert?"
5
And he asked them, "How many loaves have you?" They said, "Seven."
6
And he commanded the crowd to sit down on the ground; and he took the seven loaves, and having given thanks he broke them and gave them to his disciples to set before the people; and they set them before the crowd.
7
And they had a few small fish; and having blessed them, he commanded that these also should be set before them.
8
And they ate, and were satisfied; and they took up the broken pieces left over, seven baskets full.
9
And there were about four thousand people.
10
And he sent them away; and immediately he got into the boat with his disciples, and went to the district of Dalmanu'tha.
Posted by Jesus Caritas Est at 6:18 PM