de 7 earthquake struck the island of Haiti overnight, the poorest nation in the northern hemisphere, destroying entire buildings and leaving hundreds and perhaps thousands dead. Haiti is one of the countries of Central America that has diplomatic relations with Taiwan. The Foreign Office in Taipei has already expressed willingness to send teams specialized in emergency aid and earthquakes. In Haiti all communication is down and the only news so far is via satellite. According to eye witness accounts from workers on the ground in a Catholic NGO, Port-au-Prince, the capital is "total chaos" smoke and dust rising from the ruins, survivors and injured people who go around seeking help, people who are still under the rubble. Thousands of people wander the streets crying, which shows, each step revealing new destruction. The UN, which has 7 thousand peacekeeping soldiers and 2 thousand policemen on the island, said that a building of its headquarters was damaged, and "a large number of its staff scattered”. The UN has been present on the island since 2004, when the then President of Haiti, Bertrand Aristide went into exile. Haiti, with a population of approximately 9.6 million inhabitants, was recovering from various natural disasters - 4 tropical storms or hurricanes - which killed 800 people in 2008. The poverty of the country is abysmal. The World Bank estimates, the average income per person is 560 U.S. dollars, 54% of Haitians live on less than $ 1 a day and 78% with less than $ 2 per day. In Taipei, Foreign Ministry spokesman Henry Chen said that his ministry is collecting information on the disaster to see how and when to intervene. Specialized teams of firefighters are ready to depart. Among them there are 140 people specializing in emergency and 8 dogs trained for rescue. The group was launched in 2000 after an earthquake that struck Taiwan in September 1999, and caused thousands of deaths.
(source: http://www.asianews.it/news-en/Earthquake-in-Haiti:-Hundreds,-perhaps-thousands-of-dead.-Taiwan-ready-with-aid-17329.html

CNA report:
The Italian daily La Repubblica reported the death of Archbishiop Serge Miot, Archbishop of the Haitian capital of Port-au-Prince at 4:44 a.m. (CDT). According to the brief report, his body was found in the rubble of the archbishop's office. They also reported that the Vicar General, Msgr. Benoit, was still missing.
Acc 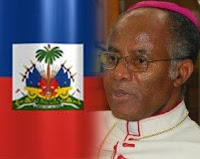 ording to the Vatican's Fides news agency, Apostolic Nuncio to Haiti, Archbishop Bernardito Auza was reported as saying:
"Port-au-Prince is totally devastated. The cathedral, the Archbishop's Office, all of the big churches, all of the seminaries have been reduced to rubble. The same luck for the Ministry buildings, the Presidential Palace, the schools. The Parish Priest of the Cathedral, who was spared, told me that the archbishop of Port-au-Prince would have died under the rubble, together with hundreds of seminarians and priests that are under the ruins."
http://www.catholicnewsagency.com/news/haitian_archbishop_killed_by_devastating_earthquake/

CNA report:
The Church of the Most Holy Trinity at the Shrine of Fatima in Portugal was attacked last weekend by vandals who sprayed Islamic graffiti on several statues, including one of Venerable P

ope John Paul II.
According to the newspaper La Razon, officials at the shrine said the statues were defaced with the words, “Islam, moon, sun, Muslim and mosque,” which led officials to believe the vandals were linked to the Muslim faith.
Police officers said these kinds of acts “do not occur often” and called the incident “absolutely isolated, not organized or related to any organization.”
“Shrine officials lament these acts and call on Portuguese police to investigate the matter,” a statement said.
The Shrine of Fatima is one of the main centers of Marian pilgrimage in Portugal and the world, centered upon the apparition of Our Lady to the three shepherd children, Francisco, Jacinto and Lucia, between May 13 and October 13, 1917.(source: http://www.catholicnewsagency.com/news/vandalism_at_fatima_shrine_denounced_by_officials/

CISA report:
A Catholic missionary from the congregation of Missionaries of Africa also known as White Fathers died in a fire tragedy last Tuesday in the capital of Tunisia, Tunis and the cause of the fire is still under investigation by police.54 year old Fr Gian-Battista Maffi of the Missionaries of Africa died in a fire in the library of the Institut des Belles Lettres Arabes (Institute of Arabic Literature) in Tunis last Tuesday afternoon. Fr Gerard Chabanon, Superior General of the White Fathers, told MISNA that Fr Maffi's body will be repatriated to Italy in the next few days after post-mortem results. A letter sent Thursday by the priest's provincial, Fr José Maria Cantal, stated that he arrived on the scene only minutes after the blast and found Fr Maffi already lying dead on the floor amid the flames. Fr Jose said the tragedy was very hard on Fr Maffi's confreres and especially difficult for his mother who is 87. He praised the emergency services that were very supportive and stayed all night with the community. The requiem Mass for the late was celebrated on Saturday in the Cathedral of Tunis, presided by Bishop Maroun Lahham, and con-celebrated with local Catholic clergy.Fr Chabanon said that besides Catholic friends and family present: “The Cathedral was crowded with many Muslims as a sign of their solidarity and friendship.” “About 60 percent of the library was destroyed by fire and water. For us and the locals the fire in the library, home to thousands of ancient and precious volumes, was a great loss for Arab culture and inter-cultural dialogue,” Fr Chabanon said.The late priest from Mozzanica (Bergamo) was director of the library for two years. Ordained in 1984, Fr Maffi carried out his first mission in Mali, after training in Italy.He then worked for seven years as librarian at the Pontifical Institute of Arab and Islamistic Studies (PISAI) in Rome, Italy.The Library founded in 1926 by the Missionaries of Africa, like the Christian-Islamic research centre is situated in the popular neighborhood of Makal Ezzam, near the Medina.(source: http://www.cisanewsafrica.org/story.asp?ID=4342

AUSTRALIA
MANY COPTIC CHRISTIANS FLEE FROM PERSECUTION
Cath News report:
An Egyptian man in Australia lives in fear of a backlash against his family because of his conversion from Islam to Christianity.
"Mina", 36, is afraid for the safety of his family here and in Egypt, for defyin

g the police and fleeing the country after he converted to the Coptic Orthodox Christian faith. He had been arrested and beaten numerous times, The Age reports.
His Melbourne lawyer Jimmy Morcos said that after the arrest "Mina" was thrown in a room with Islamic radical prisoners who were encouraged to beat him.
Mina is one of 70,000 Coptic Orthodox Christians who have fled persecution in Egypt and resettled in Australia since 1971, according to their bishop in Victoria, Bishop Suriel.
He will be one of 12,000 expected to march to the Egyptian consulate in the city tomorrow to protest over the killing of six Coptic Orthodox Christians in a drive-by shooting in Egypt last month.
The protest would call on the Australian Government to break its silence on the attacks on Copts in Egypt which has drawn wide condemnation round the world, including from the Pope.
(source: http://www.cathnews.com/article.aspx?aeid=18758
ASIA
INDIA: ST. ANTHONY CHAPEL UNDER RECONSTRUCTION
CNA report:
A chapel to St. Anthony in India which was severely damaged in several 2008 attacks by religious extremists is now under reconstruction with the assistance of an international charity.
The chapel, on the island of Rameswaram in the southern state of Tamil Nadu, was attacked several times between June and August 2008. The attacks took place at about the same time as anti-Christian violence in Orissa state left more than 80 dead and drove 30,000 from their homes.
The charity Aid to the Church in Need (ACN) has promised about $29,000 towards the cost of a new shrine.
Parish priest Fr. Michael Raj told ACN that the chapel was “heavily damaged twice” by “unidentified anti-social and religious elements” and “fanatic religious groups.”
“This is repeatedly happening here and there are intruders who break the holy cross… They plan to remove the Christian symbols from this site,” he added.
The new chapel will have a protective wall around the compound. The local church also intends to erect a house for visiting pilgrims and to extend the hall at the shrine.
Despite the attacks, Fr. Raj said, “our faith is stronger and we are sure that the God in whom we believe, amidst all these struggles, will save our faith and our place of worship – which is the shrine of St. Anthony.”
The number of pilgrims to the church is “constantly increasing,” he reported.
Though religious groups are suspected in the attacks, the priest said that most members of other faiths on the island support the campaign to save the chapel.
A “reasonable number” of Hindus and Muslims come to the site as pilgrims and visitors, he told ACN.
A shrine to St. Anthony has been on the island of Rameswaram since missionaries first arrived in the 19th century. The original chapel was destroyed by a cyclone in 1964 and a replacement was severely damaged by 2004’s tsunami.
St. Anthony is patron of mariners and fishermen, and so the shrine attracts many visitors on an island where families depend on the sea for their livelihood.
The costs of the shrine project total over $61,000. Local people have already raised more than $16,000 towards the total, despite being from the poorer social classes.
“Though our people are at the bottom of the society in all the spheres they are known for Faith and Commitment towards, and for, the Holy Mother Church,” Fr. Raj told ACN. “I thank God for all that he is doing for me in serving him and practising our faith in this land where we are having a time of persecution and a test in saving our faith and places of worship.”(source: http://www.catholicnewsagency.com/news/st._anthony_chapel_in_india_being_rebuilt_after_extremist_attacks/

Mark 1: 29 - 39
29
And immediately he left the synagogue, and entered the house of Simon and Andrew, with James and John.
30
Now Simon's mother-in-law lay sick with a fever, and immediately they told him of her.
31
And he came and took her by the hand and lifted her up, and the fever left her; and she served them.
32
That evening, at sundown, they brought to him all who were sick or possessed with demons.
33
And the whole city was gathered together about the door.
34
And he healed many who were sick with various diseases, and cast out many demons; and he would not permit the demons to speak, because they knew him.
35
And in the morning, a great while before day, he rose and went out to a lonely place, and there he prayed.
36
And Simon and those who were with him pursued him,
37
and they found him and said to him, "Every one is searching for you."
38
And he said to them, "Let us go on to the next towns, that I may preach there also; for that is why I came out."
39
And he went throughout all Galilee, preaching in their synagogues and casting out demons.
Posted by Jesus Caritas Est at 2:23 PM