(VIS) - During the course of the year 2009, a total of 2,243,900 faithful and pilgrims participated in general or special audiences, in the Sunday Angelus or in liturgical celebrations presided by the Pope. According to statistics released by the Prefecture of the Pontifical Household, more than half a million people attended the Wednesday general audiences, the month of April registering the highest attendance figures, and 1,120,000 were present for the Sunday praying of the Angelus. A communique concerning the statistics explains that the figures are approximate, being calculated on the basis of various factors: formal requests received to attend the events, tickets issued, and (in the case of the Angelus or large celebrations in St. Peter's Square and the Vatican Basilica) calculations of the number of faithful present. The statistics, the communique concludes, refer exclusively to celebrations and events held in the Vatican and Castelgandolfo, and do not take account of the Pope's meetings with large numbers of faithful during his pastoral visits within Italy or on his apostolic trips to other countries.PD/POPE AUDIENCES/... VIS 100105 (190)

OTHER PONTIFICAL ACTS VATICAN CITY, 5 JAN 2010 (VIS) - The Holy Father: - Accepted the resignation from the office of auxiliary of the archdiocese of Munich and Freising, Germany, presented by Bishop Franz Dietl, in accordance with canons 411 and 401 para. 1 of the Code of Canon Law. - Appointed Msgr. Wolfgang Bischof of the clergy of the archdiocese of Munich and Freising, Germany, regional pastor for the northern pastoral zone and vicar of the cathedral chapter, as auxiliary of the same archdiocese (area 12,081, population 3,533,000, Catholics 1,818,661, priests 1,307, permanent deacons 226, religious 3,122). The bishop-elect was born in Freising in 1960 and ordained a priest in 1988. - Appointed Fr. Abba Lisane-Christos Matheos Semahun, vicar general of the archieparchy of Addis Abeba, Ethiopia, as auxiliary of the same archieparchy (area 291,424, population 25,892,000, Catholics 28,132, priests 83, religious 402) with specific pastoral responsibility for the zone of Bahir Dar. The bishop-elect was born in Gurage, Ethiopia in 1959 and ordained a priest in 1988. - Appointed as members of the Pontifical Council for Social Communications: Archbishop Thomas Christopher Collins of Toronto Canada; Archbishop Francis Xavier Kriengsak Kovithavanij of Bangkok, Thailand; Bishop Bechara Rai O.M.M. of Jbeil, Byblos of the Maronites, Lebanon; Bishop Hector Luis Gutierrez Pabon of Engativa, Colombia, and Bishop Joan Piris Frigola of Lleida, Spain.RE:NEA:NA/.../... VIS 100105 (230)

EUROPE
MEDJUGORJE: CARDINAL DEFENDS HIS DECISION TO VISIT
The Catholic Herald reports that Cardinal Christoph Schönborn has defended his decision to visit Medjugorje after he was criticised by the local bishop. The Archbishop of

AFRICA
NIGERIA: NURSING MOTHER & BABY KILLED BY POLICE
All Africa reports that a nursing mother and her eight-month-old baby in Ilorin, Kwara State, were shot to death by police bullet last Sunday.
In a swift reaction, the state police command has arrested the trigger-happy policemen fingered in the tragic shooting incident.
The deceased, Mrs. Titilayo Olatunde and her late baby were amongst the six passengers in a taxi cab, when the policemen opened fire on them along New Yidi Road, Ilorin, the state capital.
A competent source told Daily Champion that late Mrs Olatunde, her baby and taxi cab driver where hit by police's bullet about 6.30pm last Sunday.
The driver identified as Isiaka Rasaki was said to have failed to stop at a check-point mounted by the cops.
His taxicab's registration is XB 384 PTG.
Our source said four other passengers in the taxicab were not hit by the police's bullet.
He noted that late Mrs. Olatunde's baby died on the spot while the nursing mother died later at the University of Ilorin Teaching Hispital (UITH).
Rasaki who was hit at the rear is still receiving treatment at the UITH.
The Police Public Relation Officer (PPRO) of Kwara State Police command, Mr. Daboh Ezekiel confirmed the incident he said the four policemen on patrol have been arrested for interrogation and they would be dealt with accordingly if they are found guilty.
He said the driver of the taxi was still responding to treatment and the police will investigate the issue and make public the outcome of their investigation.
(SOURCE: http://allafrica.com/stories/201001050362.html

ASIA
SRI LANKA: CHRISTIANS HOPE TO TAKE PART IN ELECTIONS
For Fr Rohan Silva, from the Centre for Society and Religion, Churches should do more. Human rights activists agree. The bishop of Jaffna talks about the Tamil situation.

Colombo (AsiaNews) – Human rights activists and representatives from the Catholic Church in Colombo who took part in a round table on Sunday organised by the Centre for Society and Religion (CSR) agree people must become more aware of what is at stake in the 26 January presidential election. They also concluded that Christians can play a key role in the political debate.
"Hardly anything [during the campaign] is said about the real issues that matter to the people," CSR Director Fr Rohan Silva told AsiaNews. However, "elections are an opportunity to educate voters" about "civic responsibility".
"We believe people of faith need to be involved in the political process and vote with a sense of empowerment and conscience," he added. "Unfortunately, Churches have not sufficiently educated their clergy and faithful on the civic responsibility to play a pro-active role in the political process".
Human rights activists agree. "The clergy should help the population become more aware of their rights," said Buddhist attorney S. G. Punchihewa, who attended the CSR meeting.
"Those who will not vote for current President Mahinda Rajapaksa or General Sarath Fonseka can choose among 20 more candidates," Punchihewa said. "What counts is voting. "
"For our part, we shall call on the Catholic Bishops' Conference of Sri Lanka to issue a pastoral letter on the election," Father Rohan said. "We shall collect signature for those who want a free and fair race, and shall write to all candidates that they insist on having an election without manipulation."
Meanwhile Mgr Thomas Savundaranayagam, bishop of Jaffna, met opposition candidate General Fonseka to discuss the aftermath of the war on Tamils.
"We hope that Tamils will not make the mistakes of the past, and that this time they will vote," the prelate said. "However, restrictions imposed on them must be lifted and they must feel free to choose according to their conscience. After this election, the Tamil question must be solved once and for all."(source: http://www.asianews.it/index.php?l=en&art=17273&size=A

r, Mary and Max, Samson & Delilah and The Boys Are Back, before deciding on this universally acclaimed drama," jury chair Fr Richard Leonard SJ said.
Samson & Delilah is about young love in a remote indigenous community which survives a move away from country, drug addiction, homelessness and desperate poverty. "Delilah's fidelity to Samson is the moral core of this magnificent film," Fr Leonard observed.
Untrained and, until now, unknown actors, Rowan McNamara and Marissa Gibson, give performances that would be worthy of veterans as they chart the descent and rise of this symbolic couple.
In Judges 16 the flawed Samson falls in love with the scheming Delilah who uses her relationship with Samson to neuter his power and allow the Philistine enemy to destroy the giant. It all ends in death and destruction. After her treachery, we never hear about Delilah again.
In Warwick Thornton's hands, a flawed Samson falls in love with Delilah alright, but after she cuts her hair in a grieving ritual for her grandmother, her power and strength increases as she saves Samson from his spiral towards death and destruction. Her presence in Samson's life is redemptive.
(source: http://www.cathnews.com/article.aspx?aeid=18560 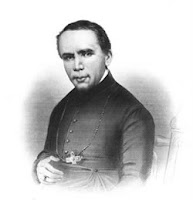 Neumann was born in Prachatice, Bohemia (modern-day Czech Republic), then within the Austrian Empire. He attended school in Budweis before entering seminary there in 1831. Two years later he transferred to the University of Prague, where he studied theology. He was interested in astronomy and botany. He intended to be ordained, but his bishop, in 1835, decided there would be no more ordinations, as Bohemia had a high number of priests already.
Neumann, who spoke eight languages then wrote to other bishops in Europe, but they all replied that they also had too many priests already. He was inspired by the missionary writings of Bishop Frederic Baraga in America, and because he had learned English by working in a factory with English-speaking workers, Neumann wrote to bishops in America, requesting to be ordained in the United States. In 1836, he arrived in the United States with very little money, and was ordained to the priesthood there. He was assigned by the Bishop of New York to work with recent German immigrants in mission churches in the Niagara Falls area, where he visited the sick, taught catechism, and trained teachers to take over when he left. After four years of service there, he realized his own need for support and came to realize the importance of communal activity in his work. He thus applied to the Redemptorists. He was accepted, and entered the novitiate of the order in Pittsburgh, Pennsylvania. In January, 1842, he took the vows to enter the order in Baltimore, Maryland, and became the first Redemptorist in the New World. After six years of difficult but fruitful work with the order, he was appointed the order's provincial superior in the United States. Neumann was naturalized as a citizen of the United States in Baltimore on February 10, 1848.
In March 1852, Neumann was consecrated in Baltimore, as Bishop of Philadelphia, Pennsylvania. He was the first to organize a Catholic diocesan school system and increased the number of Catholic schools in his diocese from one to two hundred. He also introduced the School Sisters of Notre Dame to the New World to assist in religious instruction and staffing the orphanage. In 1853, he established Saint Peter's Parish in Riverside, New Jersey.
Neumann was not a popular bishop and received criticism. He had to deal with the Know Nothings, a political group determined to deprive foreigners and Catholics of their civil rights; the group burnt down convents and schools. Discouraged, Neumann unsuccessfully wrote to Rome and asked for someone else to take his place.
Neumann wrote in many Catholic newspaper and magazine articles. He also published two catechisms and a Bible history in German. There were also many teaching orders brought in by him.
In 1860, Neumann died due to a stroke at the age of 48 while walking down a street in Philadelphia. After his death people began to talk of how great he had been.(SOURCE: http://www.ewtn.com/saintsHoly/saints/J/stjohnneumann.asp

Mark 6: 34 - 44
34
As he went ashore he saw a great throng, and he had compassion on them, because they were like sheep without a shepherd; and he began to teach them many things.
35
And when it grew late, his disciples came to him and said, "This is a lonely place, and the hour is now late;
36
send them away, to go into the country and villages round about and buy themselves something to eat."
37
But he answered them, "You give them something to eat." And they said to him, "Shall we go and buy two hundred denarii worth of bread, and give it to them to eat?"
38
And he said to them, "How many loaves have you? Go and see." And when they had found out, they said, "Five, and two fish."
39
Then he commanded them all to sit down by companies upon the green grass.
40
So they sat down in groups, by hundreds and by fifties.
41
And taking the five loaves and the two fish he looked up to heaven, and blessed, and broke the loaves, and gave them to the disciples to set before the people; and he divided the two fish among them all.
42
And they all ate and were satisfied.
43
And they took up twelve baskets full of broken pieces and of the fish.
44
And those who ate the loaves were five thousand men.
Posted by Jesus Caritas Est at 2:30 PM