VATICAN
POPE: BLESSING OF THE LAMBS FOR THE FEAST OF ST. AGNES

(VIS) - This morning, in keeping with the tradition for today's feast of St. Agnes, the Pope blessed a number of lambs in the Urban VIII Chapel of the Vatican Apostolic Palace. The wool of the lambs is used to make the palliums bestowed on new metropolitan archbishops on June 29, Solemnity of Sts. Peter and Paul, Apostles. The lambs are raised by the Trappist Fathers of the Abbey of the Three Fountains in Rome and the palliums are made from the newly-shorn wool by the sisters of St. Cecilia..../BLESSING LAMBS/... VIS 100121 (110)


MASS FOR 25TH ANNIVERSARY PONTIFICAL HEALTHCARE COUNCIL VATICAN CITY, 21 JAN 2010 (VIS) - In the Vatican Basilica at 10.30 a.m. on Thursday 11 February, Feast of Our Lady of Lourdes, the Pope will preside at the celebration of Mass for the sick, marking the World Day of the Sick and the twenty-fifth anniversary of the foundation of the Pontifical Council for Health Pastoral Care..../MASS SICK/... VIS 100121 (70)

FIRST FEMALE UNDER SECRETARY OF JUSTICE AND PEACE COUNCIL

VATICAN CITY, 21 JAN 2010 (VIS) - The Pontifical Council for Justice and Peace has released a communique concerning today's appointment of Flaminia Giovanelli as its new under secretary. The communique is signed by Cardinal Peter Kodwo Appiah Turkson and Bishop Mario Toso S.D.B., respectively president and secretary of the same dicastery. The new under secretary is a graduate in political science from the University of Rome and holds diplomas in library science and religious studies. She began working in the then Pontifical Justice and Peace Commission in 1974 where she has since followed matters relating to development, poverty and work in the context of Church social doctrine. She is an expert in the development and labour policies of the International Labour Organisation, the Council of Europe, the European Union, ECOSOC and the United Nations Economic Commission for Europe. Flaminia Giovanelli, says the communique, "is the first woman to hold the position of under secretary of the Pontifical Council for Justice and Peace. Before her the Australian lay woman Rosemary Goldie held the same post in the Pontifical Council for the Laity from 1966 to 1976, while a religious, Sr. Enrica Rosanna F.M.A., is currently under secretary of the Congregation for Institutes of Consecrated Life and Societies of Apostolic Life. "The appointment of Ms Giovanelli", the text adds, "confirms the great trust the Church and the Holy Father Benedict XVI place in women. In his time, Venerable Pope John Paul II also underlined the need for a 'fuller and meaningful participation of women in the development of society'".CON-IP/PROMOTION WOMEN/GIOVANELLI VIS 100121 (270)

OTHER PONTIFICAL ACTS VATICAN CITY, 21 JAN 2010 (VIS) - The Holy Father appointed: - Flaminia Giovanelli, official of the Pontifical Council for Justice and Peace, as under secretary of the same pontifical council. - As members of the Pontifical Council for Promoting Christian Unity: Cardinal Jean-Pierre Ricard, archbishop of Bordeaux, France, and Bishop Johan Jozef Bonny of Antwerp, Belgium. - Archbishop Cyril Vasil S.J., secretary of the Congregation for the Oriental Churches.NA/.../... VIS 100121 (80)


CNA report:
In order to defend and promote the presence of Christians in society, the Archdiocese of Seville, Spain will host the third Catholics and Public Life Day, which will be held February 12 and 13 on the Bormujos University campus in Seville. The day's theme will be “Christian Testimony in a Secular Society.”
During a press conference announcing the event, the vicar general of the archdiocese, Father Fernando Ortiz, remarked that this year, activities will center on the economic crisis, the family and the media.
Speaking on the importance of the event, Fr. Ortiz said, “Christians are exercising their liberty in demanding a place in public life.” He recalled that Pope Benedict XVI, in the encyclical “Caritas in Veritate,” defended the presence of Catholics in the public square, “against the predominant tendency that argues for separating the essence of Catholics from their role in society.”
Jose Maria Monzon, secretary of the Catholic Association of Advertisers, said the event brings to light “the true concerns of citizens.” He underscored that during the day, “the doors of the campus will be opened so the event will become a forum for all who have something to contribute.” (SOURCE: http://www.catholicnewsagency.com/news/archdiocese_of_seville_organizes_catholics_and_public_life_day/ 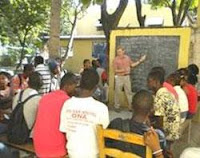 ndreds of police agents and soldiers forcibly blocking anyone who tries to reach the Dong Chiem parish church. Those who dare approach are threatened and can be arrested.Hanoi (AsiaNews) – Vietnamese authorities appear to have opted for a violent crackdown. In Dong Chiem parish, a man religious was viciously beaten (pictured), many people have been threatened, some arrested, whilst the local church is under siege, no one allowed near it. This comes after Catholics held a peaceful rally to protest the destruction of a cross on Mount Tho in an area owned by the Church for over a hundred years. Meanwhile, expressions of solidarity have poured in from Catholics in other neighbouring provinces of northern Vietnam.
The parish church “has been completely surrounded and isolated” since yesterday. “Anyone who approaches the entrance is stopped by security agents who man checkpoints around the building. Priests from the Hanoi deanery have been stopped before they could cross the Xay River bridge, some 500 metres from the church.”
The archdiocese of Hanoi has used the aforementioned terms to describe the situation. Its strong-worded statement will be read in all of the capital’s churches at the end of every Mass, starting today until next Sunday.
Saint Francis’ prayer will be read. “Where there is hatred, let me sow love,” the text says, “for the parish priest, his vicar and all his faithful,” and “especially for our brothers and sisters” who have been “beaten and jailed. May they firmly keep their faith in this time of difficulty and be able to join the mystery of the Cross of Christ.”
The statement goes further. “We want man’s fundamental human rights be respected,” it said, “so that our country can have peace, justice, democracy and know true civilisation”.
It also refers to hundreds of police agents and soldiers, some in uniform, others in plain clothes, mobilised for the action against the parish. It speaks of parishioners terrorised by loud speakers spewing insults, lies and threats against the parish priest, Fr Nguyen Van Huu, his vicar, Fr Nguyen Van Lien (who have already been interrogated and threatened several times by police) and parishioners. Altogether 16 people are said to have been detained or arrested.
“The inhuman treatment meted out on 11 January to Nguyen Huu Vinh was far worse. The same is true for Redemptorist Brother Anthony Nguyen Van Tang.”
“At the checkpoint on the Xay River bridge, four or five agents attacked the Redemptorist and a layman. The latter was only slightly injured, but Br Anthony Nguyen received wounds to the head, lips and eyes. The victims was viciously beaten until he lost consciousness,” Redemptorist Provincial Superior Fr Peter Nguyen Van Khai wrote.
If the situation was not so tragic, the recent attack against AsiaNews by the state-controlled Vietnam News Agency (VNA) could be treated as a bad joke.
Knowing that it cannot be contradicted at home, VNA accused AsiaNews of spreading “defamatory stories” concerning the Dong Chiem affair, claiming that “Catholics have not suffered repression.”(SOURCE: http://www.asianews.it/news-en/Brother-viciously-beaten-in-Dong-Chiem,-a-parish-under-siege-17410.html
AFRICA
NIGERIA: ATTACK ON CHRISTIANS KILLS 15
CISA report:
The Plateau State Christian Elders Consultative Forum has condemned Sunday�s attack on Christian faithful where 15 people died and 35 arrests made after a group of Muslim youth attacked Catholics who were going for mass in the northern Nigerian City of Jos.In a statement, signed by Bishop Andersen Bok, National Coordinator, and Dr. Musa Pam, secretary general, the forum said, �We hereby condemn today�s attack on Christians in Jos, the capital of Plateau State in which several persons have been reported injured or dead.�According to Vanguard, The Plateau State Christian Elders Consultative Forum described the action as Islamic terrorism on Churches.The group said the attacks after the normal Christian services in churches were premeditated, wicked, deliberate and terrifying.They said, �Shortly after the attack, we were made to believe that some Islamic fundamentalists were engaging themselves in some fracas after some disagreement which spilled into churches leading to Christian casualties.�Why must it be churches and Christians who will suffer from an all-Muslim affair? Why would Islamic fundamentalists engage themselves on a Sunday morning shortly after the service if the �terror� act was not premeditated?� They asked.The Forum urged Muslims to see this as the last of such provocation on Christians in the state, stressing that �enough was enough.� (source: http://www.cisanewsafrica.org/story.asp?ID=4356 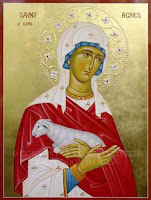 Few legends of saints have been more cherished than that of the virgin martyr Agnes. She was held in high regard by the primitive Christian Church, and her name has remained a symbol of maidenly purity through the ages. According to tradition, Agnes was a Christian girl of Rome, perhaps twelve or thirteen years old, when Diocletian began his persecutions. Like St. Lucy, she was sentenced by a judge to a house of ill fame, but a young man who looked upon her lustfully was stricken blind. Thereafter she was taken out to be burned, but whether she met her death by fire or sword we cannot know with any certainty. Although we have no contemporary sources for the facts of her life and martyrdom, there is little reason to doubt the main outline of the story. References to this young saint appear in many Church writings of later date. St. Ambrose, St. Damasus, and Prudentius all praise her purity and heroism. Her name occurs in the Canon of the Mass. Agnes' crypt was in the Via Nomentana, and the stone covering her remains was carven with the words,

Mark 3: 7 - 12
7
Jesus withdrew with his disciples to the sea, and a great multitude from Galilee followed; also from Judea
8
and Jerusalem and Idume'a and from beyond the Jordan and from about Tyre and Sidon a great multitude, hearing all that he did, came to him.
9
And he told his disciples to have a boat ready for him because of the crowd, lest they should crush him;
10
for he had healed many, so that all who had diseases pressed upon him to touch him.
11
And whenever the unclean spirits beheld him, they fell down before him and cried out, "You are the Son of God."
12
And he strictly ordered them not to make him known.