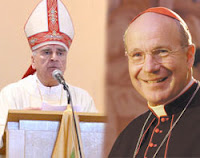 statement expressing his displeasure at not being informed of the cardinal's visit.
At the end of December 2009, Cardinal Schönborn made what was called a private visit to Medjugorje, where the Virgin Mary has supposedly appeared on a daily basis for over twenty years. The Austrian cardinal's personal secretary said the visit was “private” and not intended to “make a statement” about the authenticity of the apparitions, which do not have Vatican approval.
However, on January 2, 2010, Bishop Perić wrote an open letter to the Viennese Cardinal, saying that the visit could not be considered private because published articles by Kath.net and CNA had made the visit very public.
The bishop also emphasized that the alleged apparitions have caused turmoil in his diocese, including the presence of unapproved religious communities and openly dissenting priests. Cardinal Schönborn’s presence aggravated these problems, Bishop Perić said in his statement.
Bishop Perić also expressed his shock and disappointment at the fact that Cardinal Schönborn had failed to observe the courtesy brother bishops pay of informing the local ordinary of a diocese their plans to visit.
In its most recent statement, the Diocese of Mostar noted on its website that Cardinal Schönborn had a private audience with Pope Benedict in Rome on January 15, and shortly thereafter, the cardinal faxed a handwritten letter of apology to Bishop Perić.
The beginning of the letter reads: “ Your Excellency, Dear Brother in Christ. I have received your letter from January 2 of this year. I regret if you have the impression that my pilgrimage to Medjugorje did a disservice to peace. You can be sure that this was not my intention.”
The contents of the rest of the letter are withheld, but it concludes: “The Mother of God and her divine Son will certainly lead all things towards that which is good. In this trust, I greet you fraternally united in the Lord and remain, Yours, + Christoph Card. Schönborn O.P.”(SOURCE; http://www.catholicnewsagency.com/news/cardinal_schnborn_issues_apology_to_bishop_of_medjugorje/

LATIN AMERICA: BISHOPS CONTINUE TO ENCOURAGE AID TO HAITI
CNA report:
Bishops from Latin America are urging the faithful to offer prayers and financial assistance to earthquake victims in Haiti.
Last week, the president of the Dominican Republic bishops' conference, Cardinal Nicolas de Jesus Lopez Rodriguez sent a letter to Archbishop Louis Kebreau of Cap-Haïtien expressing his nation's sorrow with “everything Haiti is suffering.”
The president of Caritas Peru, Bishop Miguel Irizar, noted last week that “the impact of the disaster has been devastating” and lamented that unofficial statistics indicate “the number of those affected surpasses three million and as many as 100,000 could be dead.”
Responding to the call by Pope Benedict XVI to help the earthquake-stricken nation, Caritas Peru has launched its own fund-raising appeal, the bishop said.
Last Wednesday at his general audience, the Holy Father invited "everyone" to join with him in prayer for the deceased as he also implored that God provide consolation and relief from suffering to the survivors.
He appealed especially for generosity in giving to "these brothers and sisters who are living a moment of necessity and pain, our concrete solidarity and the proactive support of the international community.”
Also last week, leaders from the bishops' conferences of Costa Rica and Colombia called on Catholics to generously contribute to a Jan. 24 second collection. (SOURCE: http://www.catholicnewsagency.com/news/latin_american_catholics_continue_to_show_solidarity_with_haiti/

BANKOK: CHILDREN WARNED AGAINST DRUGS
UCAN report:
Some 3,000 children and youths from slums around Bangkok learned about the dangers of drug and substance abuse at a fair held for them recently.
Seminarians, nuns and student 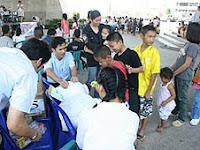 s from Catholic schools helped organize activities and games, and manned stalls with anti-drug abuse posters and pamphlets at a public park.
There were also discussions on different types of addictions, their causes and effects, and ways to build awareness of such issues in communities.
Banchong Sae-Ung, from Bangkok archdiocese’s Social Action Center, organized the event for the young people from 500 Buddhist and Muslim slum communities.
Addiction for young people often means a path of crime or even premature death, said Banchong, who is also a member of the Office of the Narcotics Control Board.
He has been working in many of the slum communities to stem drug abuse and alcoholism, together with various Church bodies and congregations such as the Sacred Heart nuns.
The Jan. 17 fair was designed to educate poor children on the issues in an environment where they could also enjoy themselves.
Thailand’s Minister of Justice Pirapan Salirathavibhaga presided at the event which was also attended by many community leaders.
“The youth are the energy of the country, all communities must support them and (help) them keep clear of drugs,” he told the gathering.
Sacred Heart Sister Nora Radomkit said that although deprived communities have many problems to address, such as lack of clean water and basic amenities, “drug abuse is a major issue.”(SOURCE: http://www.ucanews.com/2010/01/20/slum-kids-warned-against-drugs
AFRICA
SUDAN: 6 ACCUSED MEN EXECUTED
CISA report:
Amnesty International has condemned the execution of six men accused of murdering 13 policemen during clashes over a forced eviction in Khartoum, Sudan in 2005.In a statement released today, the organization has grave concerns that the defendants may have been forced to confess to the murders under torture, after the Supreme Court ignored repeated complaints by defense lawyers that the men were tortured and instead twice confirmed the death sentences. 'Six men have lost their lives due to the Courts' blatant failure to ensure their right to a fair trial. These tragic deaths highlight the growing number of executions taking place in Sudan, many of which are being carried out after unfair trials. More needs to be done to protect defendants against torture and unfair trials.' said Tawanda Hondora, Deputy Africa Director.Seven men were originally sentenced to death on 23 November 2006 for the killing of 13 policemen who died in violent clashes as they attempted to forcibly evict residents from the Soba Aradi squatter settlement in Khartoum in May 2005. Six of the defendants, Paul John Kaw, Abdelrahim Ali Al Rahama Mohamed, Idris Adam Elias, Naser El Din Mohamed Ali Kadaka, Suleiman Juma’a Awad Kambal and Badawi Hassan Ibrahim, were granted a stay of execution in early December, which expired on 6 January. The seventh defendant, Fathi Adam Mohamed Ahmed Dahab, had his sentence reduced to a five-year prison term.Between five and 30 residents of the settlement are also believed to have died in the clashes, no independent investigation has so far been launched to determine whether the security forces used excessive force during the evictions.(SOURCE: http://www.cisanewsafrica.org/story.asp?ID=4344

ALLEGATIONS AGAINST SCHOOL CONTINUE
Cath News report:
At least five families have now started legal action against the Catholic diocese in Toowoomba over the handling of sex abuse allegations at a local school.
Three sets of parents lauched a legal suit last month. The Toowoomba Chronicle said two more sets of parents have joined them, while the ABC reports that three more have joined the civil suit.
Lawyer Damian Scattini says the fact the former principal was found not guilty of failing to report allegations of abuse will not affect the claim, according to the ABC.
"We are pursuing the Church, not that individual," he said, adding that the principal was found not guilty "because he notified the Church of it, so we're holding the Church to account and that's as it should be."
Toowoomba Bishop William Morris is quoted as saying by the Toowoomba Chronicle that the victims and their families remained his highest priority.
"As I have said previously, it is not appropriate for me to comment on particular cases at this time.
"However, I understand and respect the rights of victims to pursue claims," Bishop Morris said.
"My thoughts and prayers remain with all who have been affected by this tragedy."
(SOURCE: http://www.cathnews.com/article.aspx?aeid=18831

Volusian was bishop of Tours, in France, the see made famous by St. Martin two centuries earlier. He lived at a time before clerical celibacy had been enforced in the West and was married to a woman famous for her violent temper, which was a great trial to the bishop. He also lived in a time when the barbarian invasions had begun and the fear of the Goths was everywhere. In writing to a friend of his, a certain Bishop Ruricius, of nearby Limoges, St. Volusian expressed his fear of the Goths who were beginning to terrorize his diocese. Ruricius humorously replied that someone who lived with terror inside his house, meaning his wife, should have no fear of terrors from the outside.
Volusian was of senatorial rank, very wealthy, a relative of the bishop who preceded him, St. Perpetuus, and he lived in the days when Clovis was king of the Franks, the avowed enemy of the Goths.
As the Goths began to overrun Volusian's diocese, they suspected him of sympathies with Clovis and of wanting to subject them to the Franks, so Volusian was driven from his see and sent into exile.
He held the office of bishop in a very difficult time, when the whole of Western Europe was in turmoil, in the wake of the barbarian invasions from the East. Cities were sacked, government disrupted, and bishops were the only agents of stability as civil government collapsed. Gregory of Tours, who succeeded Volusian as bishop of Tours a century later, describes the turmoil of the times, and it is from his writings that we get our knowledge of Volusian.
We have no further information about Volusian's wife or his family, and we are not sure whether he died in southern France or in Spain. It is simply known that he was driven from his see, went into exile, and died after ruling as bishop for seven years.
Thought for the Day: Most of us live in very stable times, and it is difficult to imagine what it would be like if our country were invaded and national and state government ceased to exist. Our dependence on Divine Providence would be more obvious then, and our faith would have to give us strength in very different ways. The saints kept faith in the most difficult of times and leaned on God in every crisis.
From 'The Catholic One Year Bible': "A tree is identified by its fruit. A tree from a select variety produces good fruit; poor varieties, don't.... A good man's speech reveals the rich treasures within him. An evil-hearted man is filled with venom, and his speech reveals it."—Matthew 12:33, 35
(SOURCE: http://www.ewtn.com/saintsHoly/saints/V/stvolusian.asp

Mark 2: 18 - 22
18
Now John's disciples and the Pharisees were fasting; and people came and said to him, "Why do John's disciples and the disciples of the Pharisees fast, but your disciples do not fast?"
19
And Jesus said to them, "Can the wedding guests fast while the bridegroom is with them? As long as they have the bridegroom with them, they cannot fast.
20
The days will come, when the bridegroom is taken away from them, and then they will fast in that day.
21
No one sews a piece of unshrunk cloth on an old garment; if he does, the patch tears away from it, the new from the old, and a worse tear is made.
22
And no one puts new wine into old wineskins; if he does, the wine will burst the skins, and the wine is lost, and so are the skins; but new wine is for fresh skins."