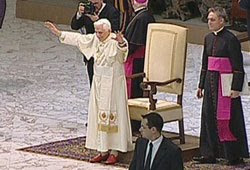 homes have been destroyed. Five Christians have been murdered, others are victims of kidnappings. According to the Christian authorities such attacks are targeted and are part of a project of "ethnic cleansing" against the Christian community throughout Iraq.
AsiaNews sources in a city confirm that all these attacks and kidnappings are a "warning" to force the mass exodus of Christians. "The families who have fled to the north, Kurdistan - has confirmed the source – have no work, nor life perspectives. The Christian community is destined to die. " (source: http://www.asianews.it/index.php?l=en&art=17231&size=A
EUROPE
ENGLAND: HOSTAGE RELEASED AFTER 2 YEARS
The London Telegraph reports that Peter Moore only took a lucrative IT contract to work at the Iraqi Finance Ministry to pay off debts accrued during an long stint doing community work in South America. Yet within two months he had been abducted by hostage takers, which marked the start of an ordeal lasting more than two and a half years. Mr Moore, 36, is the son of Graeme Moore, now 60, a delivery driver from Wigston, Leicestershire, and A 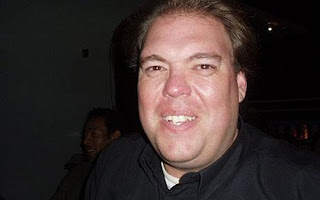 vril Sweeney, 54, from Blackburn, Lancs. His parents split when he was six months old and soon divorced. His mother remarried but that relationship also ended and she moved out when he was 12. He chose to stay and live with his stepfather, Patrick Sweeney, and later Mr Sweeney's second wife, Pauline. Despite his family circumstances he excelled at school and with the scouts, winning a Chief Scout Award aged 15 and a Queen's Scout Award five years later. He was always keen to help others, according to family friends in his home city of Lincoln. Mike Martin, former leader of Washingborough Scout Group in the city, told a local newspaper last year: "The Pete I knew had no political or religious views at all. I'm looking forward to the day when news flashes around the world that he's free." Malcolm Moore, another former scout leader, said: "He did a lot to help the youngsters and helping others has continued into his adult life." After school he went on to study computing at university, while maintaining a keen interest in off-road motorbiking. From there a love of travel, computers and helping others saw him join the Voluntary Service Overseas (VSO) programme in 2004. He was posted to Guyana in South America and tasked with helping the country's Land Commission draw up accurate maps to help sort out property disputes, and to teach computer studies. He stayed until March 2007. There he gained a repution for generosity and an unflappable nature. David Thomas, 36, an engineer from Oxford who met Mr Moore in Guyana, said he also had an ingenious side. "Pete made computers out of cardboard boxes, complete with return and delete keys, to teach his students," he said. He was "direct and modest", adding of the former hostage: "There is something very solid about Pete – you feel confident when he's there. A very genuine and kind man, and great company." While in Guyana Mr Moore was only paid an allowance of £140 a month. After returning, Mr Thomas said his friend could have taken better paid work in Africa but turned it down to work in Baghdad, despite the risks, because he believed he could "help Iraq’s government to help its people".
(source:http://www.telegraph.co.uk/news/worldnews/middleeast/iraq/6912253/Peter-Moore-the-hostage-who-wanted-to-help-Iraq.html
AFRICA
ZIMBABWE: 22 PEOPLE DIE OF MEASLES
CNN reports that twenty-two people, mainly children below the age of 5, have died of measles in Zimbabwe, the country's state media reported.
The World Health Organization (WHO) said two weeks ago it was "deeply frustrated" by the measles outbreak, which came after it sponsored a vaccination program in the African nation.
WHO's head in Zimbabwe, Dr. Custodia Mandlhate, told journalists in Harare the outbreak has totaled more than 340 suspected cases this year, and "this is not acceptable." She said the outbreak came about "mainly because of people who have denied their children vaccination."
The Herald on Tuesday reported the 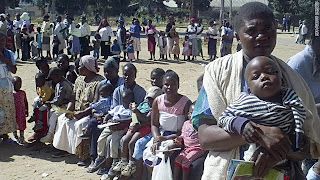 22 victims had not been vaccinated, quoting health officials in the troubled country. Ninety cases have been confirmed nationwide, Zimbabwe's Health and Child Welfare Minister Henry Madzorera told the newspaper.
"This is an unwarranted loss of lives given the fact that measles is a preventable disease," he said, according to the state-owned Herald. "In Zimbabwe, outbreaks of measles were rare because of sustained high vaccination coverage among all children. It is therefore important for parents to realize that vaccinating their children protects the individual children" from the disease and its complications," he said.
The outbreak has hit five districts in Zimbabwe, Madzorera said.
It is likely to further strain Zimbabwe's health system, which last year linked nearly 5,000 deaths to a cholera epidemic. In the past three months, five people have died from cholera, but the WHO said the situation will not be as bad as last year. (SOURCE: http://www.cnn.com/2009/WORLD/africa/12/29/zimbabwe.measles/index.html

AUSTRALIA
MAN KILLED UNBORN CHILD IN A CAR CRASH MAY FACE MANSLAUGHTER
The Australian reports that the allegedly drug-affected driver who crashed into a pregnant woman on Christmas Day, killing her unborn child, may face a manslaughter charge -- a NSW first.
The 39-year-old female driver would be the first in NSW to be charged under legislation unofficially known as Byron's Law.
Passed in 2005 after a three-year campaign by The Daily Telegraph, the legislation allows for manslaughter charges to be brought against those responsible for killing a foetus.
It was prompted by the road rage death of Byron Shields who died in his mother's womb after his parent's car was rammed into a power pole at Milperra in 2001.
The driver was jailed for six years for road rage but avoided manslaughter charges because the foetus had never taken a breath and was technically not human.
Distraught relatives of the woman struck on Christmas Day said the 29-year-old went for walk about 10.30am at Ourimbah on the NSW Central Coast, to ease pressure on her back before lunch with family an hour's drive away.
"She said `I will just go for a walk around the block to get my blood flowing before I sit in the car'," one relative said.
Eight-months pregnant, the woman had told her first child, aged two, to "help Daddy" as she headed down their driveway.
She was just 50m from home when she was allegedly struck by a mini-van which had veered across the wrong side of the road.
"[Her first child] was crying because she wasn't allowed to go on the walk," a relative said.
"Thank God she said to wait, otherwise it would have been a double fatality."
The woman was flown to Royal North Shore Hospital where she underwent an emergency Caesarean but her baby girl died the next day.
Doctors said the woman would remain in hospital for six weeks following multiple surgeries to her leg, pelvis and abdomen.
It will be another six months of rehabilitation before the former "fitness fanatic" can walk or drive.
She worked at the nearby university while her de facto had just started his own building company.
Neighbours set up a trust fund for donations to help with the couple's mounting bills.
Police yesterday renewed their appeal for information about the crash, particularly from the driver of a car seen swerving to avoid the mini-van moments before it slammed into the woman and a tree.
The 39-year-old driver of the mini-van was arrested and taken to hospital for blood and urine samples. (source: http://www.theaustralian.com.au/news/breaking-news/baby-death-driver-faces-byrons-law/story-fn3dxiwe-1225814871158

Born at Imola, 406; died there, 450. His biography, first written by Agnellus (Liber pontificalis ecclesiæ Ravennatis) in the ninth century, gives but scanty information about him. He was baptised, educated, and ordained deacon by Cornelius, Bishop of Imola, and was elevated to the Bishopric of Ravenna in 433. There are indications that Ravenna held the rank of metropolitan before this time. His piety and zeal won for him universal admiration, and his oratory merited for him the name Chrysologus. He shared the confidence of Leo the Great and enjoyed the patronage of the Empress Galla Placidia. After his condemnation by the Synod of Constantinople (448), the Monophysite Eutyches endeavoured to win the support of Peter, but without success.
A collection of his homilies, numbering 176, was made by Felix, Bishop of Ravenna (707-17). Some are interpolations, and several other homilies known to be written by the saint are included in other collections under different names. They are in a great measure explanatory of Biblical texts and are brief and concise. He has explained beautifully the mystery of the Incarnation, the heresies of Arius and Eutyches, and the Apostles' Creed, and he dedicated a series of homilies to the Blessed Virgin and St. John the Baptist. His works were first edited by Agapitus Vicentinus (Bologna, 1534), and later by D. Mita (Bolonga, 1634), and S. Pauli (Venice, 1775) — the latter collection having been reprinted in P.L., LII. Fr. Liverani ("Spicilegium Liberianum"), Florence, 1863, 125 seq.) edited nine new homilies and published from manuscripts in Italian libraries different readings of several other sermons. Several homilies were translated into German by M. Held (Kempten, 1874).(source: http://www.ewtn.com/saintsHoly/saints/P/stpeterchrysologus.asp
TODAY'S GOSPEL
6TH DAY IN THE OCTAVE OF CHRISTMAS
Luke 2: 36 - 40
36
And there was a prophetess, Anna, the daughter of Phan'u-el, of the tribe of Asher; she was of a great age, having lived with her husband seven years from her virginity,
37
and as a widow till she was eighty-four. She did not depart from the temple, worshiping with fasting and prayer night and day.
38
And coming up at that very hour she gave thanks to God, and spoke of him to all who were looking for the redemption of Jerusalem.
39
And when they had performed everything according to the law of the Lord, they returned into Galilee, to their own city, Nazareth.
40
And the child grew and became strong, filled with wisdom; and the favor of God was upon him.
Posted by Jesus Caritas Est at 11:55 AM