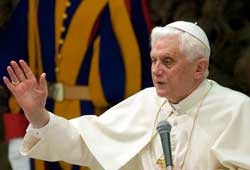 (VIS) - Benedict XVI focused his catechesis during this morning's general audience on the figure of John of Salisbury, a philosopher and theologian born in England towards the beginning of the twelfth century. Educated in Paris and Chartres, John of Salisbury acted as counsellor to various archbishops of Canterbury at whose service he placed his vast knowledge and diplomatic skills. One of these was Thomas Becket whom John followed into exile in France when that archbishop fell into dispute with King Henry II who wished to affirmed his authority over the Church and thus limit her freedom. As an elderly man, John was appointed bishop of Chartres, where he remained until his death in 1180. The Pope mentioned John of Salisbury's two principal works: the "Metaloghicon" (In defence of logic) and the "Policraticus" (The man of government). In the first of these John expresses the view that "believers and theologians who study the treasure of the faith deeply also open themselves to the practical knowledge which guides everyday actions; in other words, to moral laws and the exercise of virtue". The central thesis of the "Policraticus" is that there exists "an objective and immutable truth, the origin of which is in God, a truth accessible to human reason and which concerns practical and social activities. This is a natural law from which human legislation, and political and religious authorities, must draw inspiration in order to promote the common good". This natural law is characterised by a property "which John calls 'equity', by which he means giving each person his rights. From here arise precepts which are legitimate to all peoples and which cannot under any circumstances be abrogated". "The question of the relationship between natural law and positive law, as mediated by equity, is still of great importance", said Benedict XVI. "Indeed, in our own time, and especially in certain countries, we are witnessing a disquieting fracture between reason, which has the task of discovering the ethical values associated with human dignity, and freedom, which has the responsibility of accepting and promoting those values. "Perhaps", he added, "John of Salisbury would remind us today that the only 'equitable' laws are those that defend the sacredness of human life and reject the legitimacy of abortion, euthanasia and unrestrained genetic experimentation; the laws that respect the dignity of marriage between a man and a woman, that are inspired by a correct understanding of the secularism of the State - a secularism that must always include the safeguarding of religious freedom - and that seek subsidiarity and solidarity at the national and international level. "Otherwise", the Holy Father concluded: "we would end up with what John of Salisbury defined as the 'tyranny of the prince' or, as we would say, 'the dictatorship of relativism', a relativism which, as I said some years ago, 'recognises nothing as definite and has as its ultimate measure only the self and its own desires'".AG/JOHN OF SALISBURY/... VIS 091216 (510)

POPE BECOMES AN HONORARY CITIZEN OF INTROD VATICAN CITY, 16 DEC 2009 (VIS) - At the end of today's general audience, celebrated in the Vatican's Paul VI Hall, Benedict XVI received the honorary citizenship of Introd, the village in the Italian region of Valle d'Aosta where he often spends a period of summer vacation. The Pope expressed his thanks to Augusto Rollandin, president of the Autonomous Region of Valle d'Aosta, and to Osvaldo Naudin, mayor of Introd, for having granted him this honour, and recalled how he had spent "unforgettable periods of rest" in the village, "surrounded by the splendour of the alpine panorama which favours the encounter with the Creator and restores the spirit". "I am happy to learn from the mayor's address", the Holy Father went on, "that my presence in Valle d'Aosta, and earlier that of my beloved predecessor John Paul II, has favoured a growth in the faith among the people there, who are dear to me and so rich in Christian tradition and in many signs of religious vitality". Benedict XVI also praised the pastoral labours of Bishop Giuseppe Anfossi of Aosta during a time in which "society nourishes illusions and false hopes, especially in the young generations, but which the Lord even today calls to become a 'family' of children of God who live with 'one heart and one soul'".AC/HONORARY CITIZENSHIP/INTROD VIS 091216 (230)

OTHER PONTIFICAL ACTS VATICAN CITY, 16 DEC 2009 (VIS) - The Holy Father appointed Fr. Jose Luiz Majella Delgado C.Ss.R., adjunct under secretary general of the National Conference of Bishops of Brazil, as bishop of Jatai (area 62,978, population 557,000, Catholics 454,000, priests 47, permanent deacons 17, religious 59), Brazil. The bishop-elect was born in Juiz de For a, Brazil in 1953 and ordained a priest in 1981. He succeeds Bishop Aloisio Hilario de Pinho F.D.P., whose resignation from the pastoral care of the same diocese the Holy Father accepted, upon having reached the age limit.NER:RE/.../MAJELLA:DE PINHO VIS 091216 (100)
AMERICA
BRAZIL: BISHOPS CONDEMN MURDER OF FR. BROERING
CNA reports that the Bishops’ Conference of Brazil has condemned the murder of Father Alvino Broering, who was stabbed to death on Monday morning in the town of Itajai in the Brazilian state of Santa Catarina. He was chaplain at the Universitiy of Vale do Itajai.
According to police reports, Father Broering, 46, appeared to be the victim of a break-in and was attacked several times with a knife by an unknown man.
The priest was alive when rescued, but did not survive the injuries. Police are currently looking for clues to lead them to the murderer.
After Fr. Broering's wake at the Cathedral in Itajai, Archbishop Murilo Sebastiao Krieger of Florianoplis celebrated his funeral Mass.
Statement from the Brazilian bishops
In a statement released three days prior to the murder of Fr. Broering, the Brazilian bishops condemned the killing of five other priests in Brazil in 2009. They noted that the bishops’ conference “will continue to be committed to the struggle for justice and peace because Christ came that all may have life and have it in abundance.”
The bishop extended their “love and gratitude to the priests of Brazil. We pray to God that, in fidelity to Christ, they may remain persevering, faithful shepherds dedicated to the people who have been entrusted to them.”
(SOURCE: http://www.catholicnewsagency.com/news/brazilian_bishops_condemn_killing_of_priest/

EUROPE
ITALY: A TALK WITH THE SON OF A SAINT
Catholic Herald reports: Canonised in 2004, St Gianna Beretta Mo 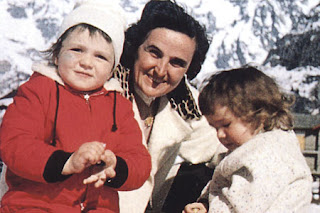 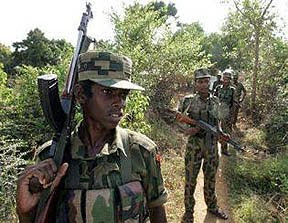 Former Tamil rebels in a jungle in Sri Lanka (File photo)
Military officials gave priests their approval for the services last week.
“We are allowed in only for religious purposes,” said Father Emilianuspillai Santhiappillai, head of Vavuniya deanery in Mannar diocese, where most of the 17 rehabilitation camps for Tamil rebels are located.
The army has given permission for 10 priests to visit for three hours on Saturdays from 6:30-9:30 a.m.
Father Santhiappillai sent priests to 15 rehabilitation camps to celebrate Mass on Saturday, Dec. 12.
More than seven months after Sri Lanka's 26-year civil war ended, about 12,000 former rebels, many little more than children, are being held. Around 3,000 of the detainees are Catholics while the rest are Hindus.
The authorities say some are being rehabilitated, others face war crimes trials and some will be given amnesty. The authorities are currently interrogating the detainees to expose senior officers and associates, rebel hideouts and ammunition dumps.
Priests hold Masses in small prayer centers or in the shade of trees.
They are screened on arrival in the camps, and cameras and mobile phones are strictly prohibited. The priests are also not allowed to carry letters or messages between the detainees and their families.
"If we do not stick to the rules, there is a risk of cancellation of access to camps," Father Santhiappillai told UCA News.
Father James Pathinathar, the parish priest of St Peter's Church in the coastal city of Mullaitivu, said some Catholic detainees had not attended Mass for a decade.
He conducted services in five camps.
Thousands of his parishioners were killed, injured or disabled in the final battle on the Mullaitivu coast. Some 300,000 had fled the war zone. The priest was himself injured in the fighting.
Father Pathinathar said being able to celebrate Masses gives him a "great opportunity to build up the faith among my boys and girls." Most come from deeply religious families, he noted.
Sri Lankan authorities still will not allow access to the camps by the International Committee of the Red Cross. No civilians are allowed in but parents and relatives can meet for a limited time at the entrance to the camp.

Cath News reports that Owen Rogers, the newly ordained deacon of St Patrick's Parish in Sydney's Blacktown said he always wanted to be a priest but circumstances never allowed it. Now, at 68 years and a grandad, he feels he's at last fulfilled his calling. "I'm elated a 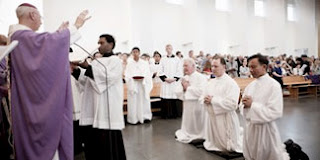 nd looking forward to the challenge of a new life's journey for me and my wife, Jeanette," Mr Rogers is quoted saying by the Blacktown Sun.
As a deacon, he could preach the Gospel, perform baptisms and assist with other sacraments.
"Jeanette and I also hope to be able to bring a Christian message of love to other couples," Mr Rogers said. "We hope to build relationships with them and we want to share our experiences of life."
He said that he had always wanted to do pastoral work.
"The vocation was there, but the situation didn't allow for it," Mr Rogers said.
"I retired three years ago and focused on becoming a deacon," he said. "I took a theology degree and the other necessary steps."
FULL STORY http://www.cathnews.com/article.aspx?aeid=18351

Commemoration of the Prophet Haggai, one of the twelve minor prophets, who prophesied during the time of King Darius of Persia and Zerubbabel, Governor of Judah (c. 520 BC). The Book of Haggai preserves his oracles to the returnees from the Babylonian Exile, in which he exhorts them to finish the rebuilding of the Temple, whose glory foretells the glory of the messianic temple to come.
N.B. The Martyrologium Romanum (Vatican Press, 2004), the Church’s official list of holy men and women, lists the saints of the Old Law alongside those of the New.
(SOURCE: http://www.ewtn.com/saintsHoly/saints/H/sthaggaitheprophet.asp
TODAY'S GOSPEL