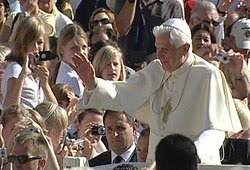 UCAN reports that the first shipment of relief materials from one group of young Catholic aid workers to earthquake survivors in Sumatra is expected to leave the capital on Oct. 6.
Young Catholics from Jakarta archdiocese pose for a photo with relief aid they collected for earthquake victims in Sumatra
“Our aid post is now collecting clothes, blankets, tarpaulins, mats, sanitary napkins and instant noodles.
We will keep this aid post for two weeks,” said Katharina Kristie Rahmawani who is coordinating the relief efforts 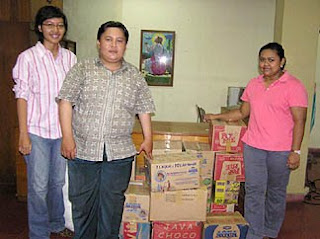 of St. Alphonsus Rodriguez Parish of Pademangan in North Jakarta.
She together with other young people have so far collected 28 million rupiah (about US$3,000) since Oct. 2.
Some of the money will be sent to Jakarta archdiocese office which will in turn send it to the Padang diocese to be channeled to needy survivors.
Relief goods from the parish will be transported to quake survivors by a Catholic who has traveled from Padang in West Sumatra to the capital to collect them, said Rahmawani. The aid will be taken to survivors in Pariaman, a coastal city nearest to the epicenter of the quake.
The earthquake, measuring 7.6 on the Richter Scale, struck West Sumatra's coastal area on Sept. 30. According to the province’s government disaster-management coordination body (Satkorlak), the quake has killed more than 600 people and injured more than 1,000 others. Hundreds are still missing.
As well as homes, many public buildings and facilities, including hotels, hospitals, mosques and schools were severely damaged. In Padang, part of the wall of St. Teresa of the Infant Jesus Cathedral building collapsed. The diocesan building and three Catholic-run schools were also damaged.
The material losses caused from the quake is estimated at trillions of rupiah.
“We young people are concerned about the plight of survivors and feel called to help after watching news programs on television,” Rahmawani said.
Young Catholics from eight other parishes in Jakarta archdiocese are also working together to collect and distribute aid to the quake survivors.
Robby Sebastian from St. Anthony of Padua Parish of Bidaracina in East Jakarta, who is co-ordinating the efforts, said young people had collected items such as milk, rice, sugar, drinking water, soap and toothpaste from Catholics.
Padang Bishop's House that was partially destroyed in the earthquake
“We had planned to distribute these goods to the victims of the earthquake that hit Java in early September but with the earthquake in West Sumatra, we agreed to … start distributing to the victims in Padang,” Sebastian told UCA.
Sebastian said young Catholics had twice before distributed relief goods to the quake’s survivors in West Java.
The government says the 7.3 magnitude quake that struck Java on Sept. 2 killed at least 59 people and damaged more than 10,000 houses. A total of 25,242 have fled from their homes.
Father Agustinus Mujihartono, who heads the emergency response team of Caritas Indonesia (Karina) of Padang diocese, told UCA News by phone that a few hours after the quake “we directly opened aid posts in the diocesan center and parishes to meet victims’ needs.”
In response to the quake in West Sumatra, Bishop Josephus Suwatan of Manado, the capital of North Sulawesi province, sent a message to all parish priests in his diocese urging them to ask Catholics to donate to relief efforts.
(SOURCE: http://www.ucanews.com/2009/10/06/catholic-youths-rally-to-help-quake-survivors/
AUSTRALIA
REPAIRS TO CATHEDRAL EXPECTED TO COST $6 MILLION
Cath News reports that Rockhampton's Bishop Brian Heenan says urgent repairs expected to cost $6 million to restore the city's 110 year old St Joseph's Cathedral are due to start next week.
Bishop Heenan says the work 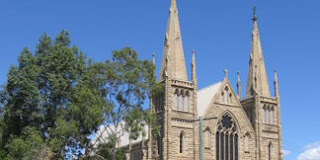 includes repairs to the building's foundations, gutters and storm water management system, ABC reported. A public appeal has been launched for funds.
"The advice we are getting is that if it's not done now, it will become more serious," he said. 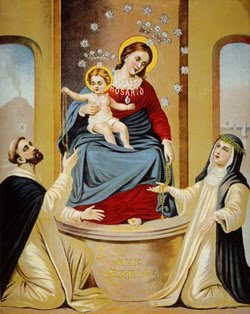 citation of the Rosary by St. Dominic, it is believed that Heaven has on many occasions rewarded the faith of those who had recourse to this devotion in times of special danger. More particularly, the naval victory of Lepanto gained by Don John of Austria over the Turkish fleet on the first Sunday of October in 1571 responded wonderfully to the processions made at Rome on that same day by the members of the Rosary confraternity. St. Pius V thereupon ordered that a commemoration of the Rosary should be made upon that day, and at the request of the Dominican Order Gregory XIII in 1573 allowed this feast to be kept in all churches which possessed an altar dedicated to the Holy Rosary. In 1671 the observance of this festival was extended by Clement X to the whole of Spain, and somewhat later Clement XI after the important victory over the Turks gained by Prince Eugene on 6 August, 1716 (the feast of our Lady of the Snows), at Peterwardein in Hungary, commanded the feast of the Rosary to be celebrated by the universal Church. A set of "proper" lessons in the second nocturn were conceded by Benedict XIII. Leo XIII has since raised the feast to the rank of a double of the second class and has added to the Litany of Loreto the invocation "Queen of the Most Holy Rosary". On this feast, in every church in which the Rosary confraternity has been duly erected, a plenary indulgence toties quoties is granted upon certain conditions to all who visit therein the Rosary chapel or statue of Our Lady. This has been called the "Portiuncula" of the Rosary.(SOURCE: http://www.ewtn.com/saintsHoly/saints/O/ourladyoftherosary.asp
TODAY'S GOSPEL
Luke 1: 26 - 38
26
In the sixth month the angel Gabriel was sent from God to a city of Galilee named Nazareth,
27
to a virgin betrothed to a man whose name was Joseph, of the house of David; and the virgin's name was Mary.
28
And he came to her and said, "Hail, full of grace, the Lord is with you!"
29
But she was greatly troubled at the saying, and considered in her mind what sort of greeting this might be.
30
And the angel said to her, "Do not be afraid, Mary, for you have found favor with God.
31
And behold, you will conceive in your womb and bear a son, and you shall call his name Jesus.
32
He will be great, and will be called the Son of the Most High; and the Lord God will give to him the throne of his father David,
33
and he will reign over the house of Jacob for ever; and of his kingdom there will be no end."
34
And Mary said to the angel, "How shall this be, since I have no husband?"
35
And the angel said to her, "The Holy Spirit will come upon you, and the power of the Most High will overshadow you; therefore the child to be born will be called holy, the Son of God.
36
And behold, your kinswoman Elizabeth in her old age has also conceived a son; and this is the sixth month with her who was called barren.
37
For with God nothing will be impossible."
38
And Mary said, "Behold, I am the handmaid of the Lord; let it be to me according to your word." And the angel departed from her.