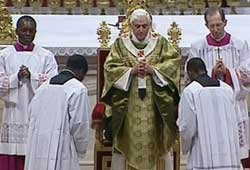 VATICAN
POPE: CLOSES THE SYNOD OF BISHOPS FOR AFRICA

Pope Benedict XVI closed the Second Special Assembly of the Synod of Bishops for Africa today with Mass in St. Peters Basilica.In his Homily, the Holy Father said the global development model should be renewed so that it is able "to include all peoples and not only those already adequately equipped."The Pope said globalization "is a human reality" that may be modified, and that the Church "works with its personalist and communitarian vision to guide the process in terms of real authentically human relations, of fraternity and sharing."The Church, said Pope Benedict, is also committed to working with all available means to see that no African goes without his daily bread. (SOURCE: http://www.youtube.com/watch?v=YpDfjIPtkUo

ASIA News reports that more than 600 thousand hectares of crops at risk. The mouth of the Pearl River flooded by sea water that destroys crops. Lack of rain due to pollution, urban development and deforestation. The drought in the valley due to Three Gorges Dam.
Beijing (AsiaNews / Agencies) - The plight of drought in central and southern China is worsening, leaving millions of people and animals without water to drink, the fields without irrigation. The governm 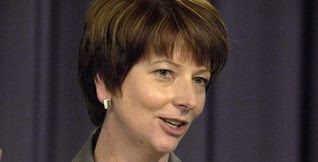 s set to invite 150 school principals from across the country for a "national conversation" on problems they are facing and for feedback on the next steps in her "Education Revolution".

The principals from the public, independent and Catholic school sectors in each state and territory will be asked this week to a two day forum on November 10 and 11, various news reports said.
She said the forum would focus on "how the Government can help principals lift educational outcomes for all students," according to the Adelaide Advertiser.
Those gathered would discuss the new national curriculum, assessment, reporting, literacy and numeracy, school infrastructure, Indigenous education and student wellbeing, AAP and Nine News adds.
"I want to have a national conversation with school principals about the challenges they are facing on the ground," Ms Gillard said in a statement.
"It also gives me the opportunity to speak directly to principals about the reforms the government is pursuing in education and the difference they will make for their schools and their students." (SOURCE: http://www.cathnews.com/article.aspx?aeid=17277

Bishop of Brescia from about 387 until about 410; he was the successor of the writer on heresies, St. Philastrius. At the time of that saint's death Gaudentius was making a pilgrimage to Jerusalem. The people of Brescia bound themselves by an oath that they would accept no other bishop than Gaudentius; and St. Ambrose and other neighbouring prelates, in consequence, obliged him to return, though against his will. The Eastern bishops also threatened to refuse him Communion if he did not obey. We possess the discourse which he made before St. Ambrose and other bishops on the occasion of his consecration, in which he excuses, on the plea of obedience, his youth and his presumption in speaking. He had brought back with him from the East many precious relics of St. John Baptist and of the Apostles, and especially of the Forty Martyrs of Sebaste, relics of whom he had received at Caesarea in Cappadocia from nieces of St. Basil. These and other relics from Milan and elsewhere he deposited in a basilica which he named Concilium Sanctorum. His sermon on its dedication is extant. From a letter of St. Chrysostom (Ep. clxxxiv) to Gaudentius it may be gathered that the two saints had met at Antioch. When St. Chrysostom had been condemned to exile and had appealed to Pope Innocent and the West in 405, Gaudentius warmly took his part. An embassy to the Eastern Emperor Arcadius from his brother Honorius and from the pope, bearing letters frorn both and from Italian bishops, consisted of Gaudentius and two other bishops. The envoys were seized at Athens and sent to Constantinople, being three days on a ship without food. They were not admitted into the city, but were shut up in a fortress called Athyra, on the coast of Thrace. Their credentials were seized by force, so that the thumb of one of the bishops was broken, and they were offered a large sum of money if they would communicate with Atticus, who had supplanted St. Chrysostom. They were consoled by God, and St. Paul appeared to a deacon amongst them. They were eventually put on board an unseaworthy vessel, and it was said that the captain had orders to wreck them. However, they arrived safe at Lampsacus, where they took ship for Italy, and arrived in twenty days at Otranto. Their own account of their four months' adventures has been preserved to us by Palladius (Dialogus, 4). St. Chrysostom wrote them several grateful letters.
We possess twenty-one genuine tractates by Gaudentius. The first ten are a series of Easter sermons, written down after delivery at the request of Benivolus, the chief of the Brescian nobility, who had been prevented by ill health from hearing them delivered. In the preface Gaudentius takes occasion to disown all unauthorized copies of his sermons published by shorthand writers. These pirated editions seem to have been known to Rufinus, who, in the dedication to St. Gaudentius of his translation of the pseudo-Clementine "Recognitions", praises the intellectual gifts of thne Bishop of Brescia, saying that even his extempore speaking is worthy of publication and of preservation by posterity. The style of Gaudentius is simple, and his matter is good. His body lies at Brescia in the Church of St. John Baptist, on the site of the Concilium Sanctorum. His figure is frequently seen in the altar-pieces of the great Brescian painters, Moretto, Savoldo, and Romanino. The best edition of his works is by Galeardi (Padua, 1720, and in P.L., XX). (SOURCE: http://www.ewtn.com/saintsHoly/saints/G/stgaudentius.asp

30TH SUN. IN ORD. TIME/YEAR B
Jeremiah 31: 7 - 9
7
For thus says the LORD: "Sing aloud with gladness for Jacob, and raise shouts for the chief of the nations; proclaim, give praise, and say, `The LORD has saved his people, the remnant of Israel.'
8
Behold, I will bring them from the north country, and gather them from the farthest parts of the earth, among them the blind and the lame, the woman with child and her who is in travail, together; a great company, they shall return here.
9
With weeping they shall come, and with consolations I will lead them back, I will make them walk by brooks of water, in a straight path in which they shall not stumble; for I am a father to Israel, and E'phraim is my first-born.
Psalms 126: 1 - 6
1
When the LORD restored the fortunes of Zion, we were like those who dream.
2
Then our mouth was filled with laughter, and our tongue with shouts of joy; then they said among the nations, "The LORD has done great things for them."
3
The LORD has done great things for us; we are glad.
4
Restore our fortunes, O LORD, like the watercourses in the Negeb!
5
May those who sow in tears reap with shouts of joy!
6
He that goes forth weeping, bearing the seed for sowing, shall come home with shouts of joy, bringing his sheaves with him.
Hebrews 5: 1 - 6
1
For every high priest chosen from among men is appointed to act on behalf of men in relation to God, to offer gifts and sacrifices for sins.
2
He can deal gently with the ignorant and wayward, since he himself is beset with weakness.
3
Because of this he is bound to offer sacrifice for his own sins as well as for those of the people.
4
And one does not take the honor upon himself, but he is called by God, just as Aaron was.
5
So also Christ did not exalt himself to be made a high priest, but was appointed by him who said to him, "Thou art my Son, today I have begotten thee";
6
as he says also in another place, "Thou art a priest for ever, after the order of Melchiz'edek."
GOSPEL
Mark 10: 46 - 52
46
And they came to Jericho; and as he was leaving Jericho with his disciples and a great multitude, Bartimae'us, a blind beggar, the son of Timae'us, was sitting by the roadside.
47
And when he heard that it was Jesus of Nazareth, he began to cry out and say, "Jesus, Son of David, have mercy on me!"
48
And many rebuked him, telling him to be silent; but he cried out all the more, "Son of David, have mercy on me!"
49
And Jesus stopped and said, "Call him." And they called the blind man, saying to him, "Take heart; rise, he is calling you."
50
And throwing off his mantle he sprang up and came to Jesus.
51
And Jesus said to him, "What do you want me to do for you?" And the blind man said to him, "Master, let me receive my sight."
52
And Jesus said to him, "Go your way; your faith has made you well." And immediately he received his sight and followed him on the way.
Posted by Jesus Caritas Est at 4:55 PM