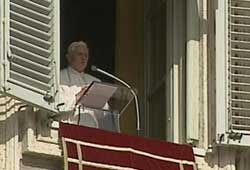 Thousands of faithful gathered in St Peters Square to hear Pope Benedict recite the Angelus on this World Mission Sunday. The Church, recalled the Pope is missionary by vocation and is called to continue the work of Jesus by proclaiming the Gospel of the Kingdom of God to all peoples. All Christians, he added are called to cooperate in this project, according to the different states of life and particular charisms. Then the Pope said:On this World Mission Sunday I remember the missionaries - priests, religious and lay volunteers - who devote their lives to bringing the Gospel into the world, also facing hardships and difficulties and sometimes even real persecution. (SOURCE: http://www.youtube.com/VATICAN#p/a/u/1/vWjk_iTaTXs

EUROPE
LEFEBVRISTS TO MEET HOLY SEE ON OCT. 26
Catholic Online reports that several months after Pope Benedict lifted the excommunications of four Society of St. Pius X bishops, the Director of the Holy See's press office, Father Federico Lombardi, announced today that the first meeting with representatives of the society will take place in Rome on Monday, October 26. The meeting will be attended by a number of individuals, including Archbishop Guido Pozzo, secretary of the Ecclesia Dei Pontifical Commission; Archbishop Luis Ladaria Ferrer, 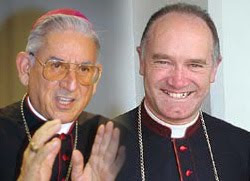 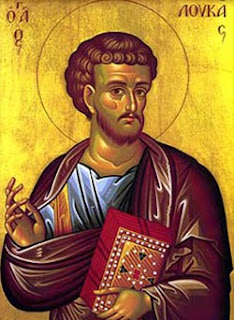 The great apostle of the Gentiles, or rather the Holy Ghost by his pen, is the panegyrist of this glorious evangelist, and his own inspired writings are the highest standing and most authentic commendation of his sanctity, and of those eminent graces which are a just subject of our admiration, but which human praises can only extenuate. St. Luke was a native of Antioch, the metropolis of Syria, a city famous for the agreeableness of its situation, the riches of its traffic, its extent, the number of its inhabitants, the politeness of their manners, and their learning and wisdom. Its schools were the most renowned in all Asia, and produced the ablest masters in all arts and sciences. St. Luke acquired a stock of learning in his younger years, which we are told he improved by his travels in some parts of Greece and Egypt. St. Jerome assures us he was very eminent in his profession, and St. Paul, by calling him his most dear physician, seems to indicate that he had not laid it aside. Besides his abilities in physic, he is said to have been very skillful in painting. The Menology of the Emperor Basil, compiled in 980, Nicephorus, Metaphrastes, and other modern Greeks quoted by Gretzer in his dissertation on this subject, speak much of his excelling in this art, and of his leaving many pictures of Christ and the Blessed Virgin. Though neither the antiquity nor the credit of these authors is of great weight, it must be acknowledged, with a very judicious critic, that some curious anecdotes are found in their writings. In this particular, what they tell us is supported by the authority of Theodorus Lector, who lived in 518, and relates that a picture of the Blessed Virgin painted by St. Luke was sent from Jerusalem to the Empress Pulcheria, who placed it in the church of Hodegorum which she built in her honour at Constantinople. Moreover, a very ancient inscription was found in a vault near the Church of St. Mary in via lata in Rome, in which it is said of a picture of the Blessed Virgin Mary discovered there, "One of the seven painted by St. Luke." Three or four such pictures are still in being; the principal is that placed by Paul V in the Barghesian chapel in St. Mary Major. (SOURCE: http://www.ewtn.com/saintsHoly/saints/L/stluke.asp
TODAY'S MASS READINGS
29TH SUN. ORD. TIME, YEAR B
Isaiah 53: 10-11
And the Lord was pleased to bruise him in infirmity: if he shall lay down his life for sin, he shall see a long-lived seed, and the will of the Lord shall be prosperous in his hand.
11 Because his soul hath laboured, he shall see and be filled: by his knowledge shall this my just servant justify many, and he shall bear their iniquities.
Psalms 33: 4 - 5, 18 - 20, 22
4
For the word of the LORD is upright; and all his work is done in faithfulness.
5
He loves righteousness and justice; the earth is full of the steadfast love of the LORD.
18
Behold, the eye of the LORD is on those who fear him, on those who hope in his steadfast love,
19
that he may deliver their soul from death, and keep them alive in famine.
20
Our soul waits for the LORD; he is our help and shield.
22
Let thy steadfast love, O LORD, be upon us, even as we hope in thee.
Hebrews 4: 14 - 16
14
Since then we have a great high priest who has passed through the heavens, Jesus, the Son of God, let us hold fast our confession.
15
For we have not a high priest who is unable to sympathize with our weaknesses, but one who in every respect has been tempted as we are, yet without sin.
16
Let us then with confidence draw near to the throne of grace, that we may receive mercy and find grace to help in time of need.
GOSPEL
Matthew 10: 35 - 45
35
For I have come to set a man against his father, and a daughter against her mother, and a daughter-in-law against her mother-in-law;
36
and a man's foes will be those of his own household.
37
He who loves father or mother more than me is not worthy of me; and he who loves son or daughter more than me is not worthy of me;
38
and he who does not take his cross and follow me is not worthy of me.
39
He who finds his life will lose it, and he who loses his life for my sake will find it.
40
"He who receives you receives me, and he who receives me receives him who sent me.
41
He who receives a prophet because he is a prophet shall receive a prophet's reward, and he who receives a righteous man because he is a righteous man shall receive a righteous man's reward.
42
And whoever gives to one of these little ones even a cup of cold water because he is a disciple, truly, I say to you, he shall not lose his reward."
Posted by Jesus Caritas Est at 7:50 PM