RITES OF BEATIFICATION APPROVED BY THE HOLY FATHER

VATICAN CITY, 8 SEP 2009 (VIS) - The Office of Liturgical Celebrations of the Supreme Pontiff today announced that the following rites of beatification, approved by the Holy Father, will take place over the coming months:

- Servant of God Eustachio Kugler (ne Joseph), German professed religious of the Hospitaller Order of St. John of God: at 2 p.m. on Sunday 4 October in the cathedral of Regensburg, Germany.

- Servant of God Ciriaco Maria Sancha y Hervas, Spanish cardinal and archbishop, founder of the Congregation of the Sisters of Charity of Cardinal Sancha, at 10 a.m. on Sunday 18 October in the cathedral of Toledo, Spain.

- Servant of God Carlo Gnocchi, Italian diocesan priest and founder of the "Pro Juventute" Foundation: at 10 a.m. on Sunday 25 October in the Piazza del Duomo in Milan, Italy.

- Servant of God Zoltan Lajos Meszlenyi, Hungarian bishop and martyr: at 10.30 a.m. on Saturday 31 October in the cathedral of Esztergom, Hungary.

- Servant of God Maria Alfonsina Danil Ghattas (nee Soultaneh Maria), co-foundress of the Congregation of the Sisters of the Most Holy Rosary of Jerusalem: at 10.30 a.m. on Sunday 22 November, Solemnity of Christ the King, in the Basilica of the Annunciation in Nazareth, Israel.
OCL/BEATIFICATIONS/... VIS 090908 (220)

- Appointed Bishop Socrates B. Villegas of Balanga, Philippines, as archbishop of Lingayen-Dagupan (area 1,565, population 1,313,000, Catholics 1,084,000, priests 76, religious 57), Philippines. The archbishop-elect was born in Manila, Philippines in 1960, he was ordained a priest in 1985 and consecrated a bishop in 2001. He succeeds Archbishop Oscar V. Cruz, whose resignation from the pastoral care of the same archdiocese the Holy Father accepted, upon having reached the age limit.

- Appointed as ordinary members of the Pontifical Academy of Fine Arts and Literature "dei Virtuosi al Pantheon": Enzo Orti, Angelo Casciello and Luca Pace for the section of painters and filmmakers; Sergio Capellini for the section of sculptors; Marco Guzzi, Roberto Mussapi and Gerardo Bianco for the section of writers and poets.
NER:RE:NA/.../... VIS 090908 (140)

- Archbishop John Choi Young-soo, emeritus of Daegu, Korea, on 31 August at the age of 67.

- Bishop Frank Marcus Fernando, emeritus of Chilaw, Sri Lanka, on 24 August at the age of 77.

- Bishop Czeslaw Lewandowski, former auxiliary of Wloclawek, Poland, on 16 August at the age of 87.

- Archbishop Gustavo Martinez Frias of Nueva Pamplona, Colombia, on 29 August at the age of 74.

- Archbishop Anthony Mayla of Mwanza, Tanzania, on 19 August at the age of 69.

- Bishop John Baptist Minder O.S.F.S., emeritus of Keimoes-Upingtom, South Africa, on 13 August at the age of 85.

ASIA
PHILIPPINES: ARCHBISHOP RESIGNS
UCAN reports that Pope Benedict XVI has accepted the resignation of Archbishop Oscar Cruz of Lingayen-Dagupan and appointed Bishop Socrates Villegas of Balanga as his successor. 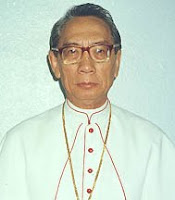 dward Joseph Adams, apostolic nuncio to the Philippines, announced the changes on Sept. 8 in a letter addressed to Monsignor Pedro Quitorio III, spokesperson for the Catholic Bishops' Conference of the Philippines.
"Pope Benedict XVI has accepted the resignation of Archbishop Oscar Cruz from the office of Lingayen-Dagupan, and has appointed Bishop Socrates Villegas, until now Bishop of Balanga, as Archbishop of Lingayen-Dagupan," read the letter, which was shown to reporters.
Archbishop Cruz submitted his resignation in March 2007, at the age of 72, more than two years ahead of the age set by canon law for bishops to request retirement. Archbishop Cruz will reach the retirement age of 75 on Nov. 17.
The canon lawyer and head of the Philippine Catholic Church's National Appellate Matrimonial Tribunal had focused much of the years toward the end of his term in Lingayen-Dagupan on fighting all forms of gambling.

Bishop Socrates Villegas
The prelate told UCA News he wanted to retire while he could still do other worthwhile work, such as writing books and procedural guides for non-canon lawyers, and on other special topics.
Archbishop Cruz expressed gratitude for the Vatican's acceptance of his resignation. He also welcomed the appointment of Bishop Villegas as his successor.
At 48, Bishop Villegas, the late Cardinal Jaime Sin's former private secretary, will be the country's youngest archbishop. (Source: http://www.ucanews.com/2009/09/08/anti-gambling-archbishop-cruz-resigns/

AFRICA
AFRICA
SUDAN: BISHOP DISPUTES CLAIMS BY UN
CISA reports that a Catholic bishop in the heart of Darfur, theatre of a bloody 6-year conflict, has disputed a recent claim by a senior UN military official that the war has all but ended.Bishop Antonio Menegazzo, Apostolic Administrator of El-Obeid, the Sudanese diocese that covers Darfur, expressed surprise at last month’s claim by General Martin Luther Agwai, the former commander of the United Nations-African Union peace-keeping force in Darfur (UNAMID).“The parties in conflict are still trying to reach a ceasefire agreement. We cannot say that the war has ended. I was truly surprised to hear General Agwai's declarations,” Bishop Memegazzo told the ENI news agency.While handing over the command to Rwandan General Patrick Nyamvumba, the Nigerian general said: "Militarily there is not much. What you have is security issues more now. Banditry, localised issues, people trying to resolve issues over water and land at a local level. But real war as such, I think we are over that."The conflict has cost 300,000 lives, according to UN estimates, and displaced up to 2.7 million people.Various humanitarian aid associations working in Darfur also criticized General Agwai's conclusion, highlighting that the humanitarian situation in the region remains extremely serious, especially due to attacks on the aid convoys sent by the international community.The Darfur conflict began in 2003 when several non-Arab groups took up arms against Khartoum, complaining at lack of representation and deliberate neglect of the region.At the height of the war in 2005, Arab Janjaweed militias were raiding African villages, burning, killing and raping civilians. In some cases, villages were bombed by government planes disguised as humanitarian flights. The scale of the atrocities provoked an international outcry and accusations of genocide against the Arab-led government in Khartoum.The government of President Omar al-Bashir has sought to portray the fighting as tribal rivalries over land and water. He is being sought by the International Criminal Tribunal (ICC) at The Hague to answer charges connected with the war in Darfur.
(SOURCE: http://www.cisanewsafrica.org/story.asp?ID=4117
AMERICAS
FILM ON ST. JOSEMARIA ESCRIVA
CNA reports that a movie based on the life of St. Josemaria Escriva de Balaguer, the founder of Opus Dei, has begun filming in Argentina under the direction of Roland Joffe, director of "The Mission" and "The Killing Fields."
The film "There Be Dragons" is a film set during the brutal Spanish Civil War in the second half of the 1930s, Catholic San Francisco reports. It is expected to be released in summer or fall 2010 and has a budget of about $30 million.
Joffe also wrote the screenplay for the film. He told an August 23 press conference that he has creative freedom over the project and had earlier rejected an offer to film an Opus Dei-provided script.
Discussing St. Josemaria, he noted that the priest "made no attempt to influence the people he worked with in terms of their politics."
"At that time, that’s pretty heroic. That’s a time when almost all human beings were faced with making extraordinary choices."
Joffe told the press conference that filmmakers found themselves making a film about love, both human love and divine love, and also about hate, betrayal and mistakes.
"I don’t know if there’s anybody who wants to live his life without meaning. So it’s also a story about people trying to find meaning about their lives, and that’s a powerful kind of story," he added, Catholic San Francisco reports.
The director said that fiction is "a way of understanding the truth" and acknowledged that he took "certain liberties" if the changes could communicate the personal issues of the time.
He said he was taken with St. Josemaria’s idea that a way to God is found through everyday life.
Alluding to the controversy over Opus Dei, a Catholic prelature which was negatively portrayed in Dan Brown’s novel The Da Vinci Code, Joffe said he has been to many Opus Dei centers and has met many members in his research. He has yet to counter "anything odd-seeming," he reported.
Fr. John Wauk, an Opus Dei priest and professor of literature and communication of the faith at the Pontifical University of the Holy Cross in Rome, was asked by Joffe to serve as an advisor on the film.
Joffe said Fr. Wauk explained what he knew about St. Josemaria and what it means to be a priest, for which the director was grateful.
"There Be Dragons" features actor Charlie Cox in the role of St. Josemaria Escriva. Cox previously worked on "Stardust" and "Casanova." Wes Bentley plays Manolo, a friend of the priest.
Ukrainian actress Olga Kurylenko plays Ildiko, a Hungarian woman who sides with the Republican movement defeated by the rightist coalition lead by Gen. Francisco Franco. (SOURCE: http://www.catholicnewsagency.com/new.php?n=17035

nis Hart, drawing criticism and dismay, but the Archbishop said he is merely obeying Canon Law.
Fr Maguire, known and loved for his work with the homeless and media roles, was quoted as saying in an AAP report that he was aware other priest who had hit 75 "received their 'pink slip'.
"I will be telling (the church) I'm not of a mind to resign," he said.
Archbishop Hart, however, said in a statement that under the Code of Canon Law, when a parish priest reaches 75, he is required to offer his resignation. The Bishop, after considering all of the circumstances of the priest and the parish, can then decide whether to accept or defer the resignation.
"According to the rules, I'm 75 in September," Fr Maguire said, "he's supposed to say: 'I need to ask you for your resignation', it's protocol."
"But I think he give me the impression ... he doesn't give a rat's arse whether I say 'well I don't wish to resign'. I think he wants me to resign." he was cited saying in an AAP report in The Age newspaper.
He has reportedly been asked to leave the chuch premises by October 28.
He was quoted by ABC News as saying on his blog site that the archbishop gave him a choice of two dates to resign by.
"Big week for me," he said on the blog. "Phone rang Wednesday. 'It's the archbishop. I'll be there in 20 minutes.' I didn't have time to think or call for help."
"Luckily, Judy, the office manager, was present to take notes. By the time he left, I was feeling 90 years of age, not 75, the age of statutory senility.
"He gave me two dates for compliance. One was my birthday. He expects a letter of resignation. The other is a month later. He expects me to vacate the premises."
Archbishop Hart said in an article in the Herald Sun that it was his duty to care for the older priests in his jurisdiction.
"The Church chooses to err on the side of properly caring for its older priests.
"So in January this year, I wrote to all priests who were due to turn 75 in 2009, alerting them to the canonical requirement that they present their resignation from office on their 75th birthday. This is a time for the priest to reflect upon their years of service and what they wish to offer the Church in their remaining years.
"Having received their offer of resignation, I would then, as required by canon law, consider whether I should accept or defer their retirement.
"As well as requiring me to invite a priest's resignation at 75 years, canon law requires me to make provision for the maintenance and residence of retired priests.
"This I do with a profound sense of obligation and gratitude," he wrote.
(Source: http://www.cathnews.com/article.aspx?aeid=16318
TODAY'S SAINT 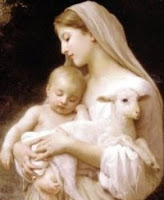