(VIS) - Benedict XVI yesterday expressed his grief at the death of six Italian soldiers, members of the "Folgore" parachute regiment, in a bomb attack in Kabul, Afghanistan, which also caused the deaths of fifteen other people. The Holy Father gave assurances of his prayers for the victims and expressed his "closeness to the families and to everyone involved", declared Holy See Press Office Director Fr. Federico Lombardi S.J. "What causes most sorrow", Fr. Lombardi went on, "is the continuation of such violence against the very people who are working for peace. ... We hope that all this bloodshed may, in the end, give way to the peace to which so many people are committed and are giving their lives".OP/KABUL VIS 090918 (140)

AUDIENCES
(VIS) - The Holy Father today received in separate audiences: - Four prelates from the National Conference of Bishops of Brazil, on their "ad limina" visit: - Archbishop Matias Patricio de Macedo of Natal, accompanied by Archbishop emeritus Heitor de Araujo Sales. - Bishop Manoel Delson Pedreira da Cruz of Caico O.F.M. - Bishop Mariano Manzana of Mossoro. - Archbishop Hilarion of Volokolamsk, president of the Department for External Church Affairs of the Patriarchate of Moscow. This evening he is scheduled to receive in audience Cardinal Angelo Bagnasco, archbishop of Genoa, Italy, and president of the Italian Episcopal Conference.AL:AP/.../... VIS 090918 (110)
IN MEMORIAM
(VIS) - The following prelates died in recent weeks: - Bishop Paul Le Dac Trong, former auxiliary of Hanoi, Vietnam, on 7 September at the age of 91. - Bishop Giovanni Melis Fois, emeritus of Nuoro, Italy, on 3 September at the age of 92. - Bishop Andrzej Jozef Sliwinski, emeritus of Elblag, Poland, on 9 September at the age of 70..../DEATHS/... VIS 090918 (70)

a Jesuit center's campaign against human trafficking in eastern India has been buoyed by its first success.

Members of a women's self-help group sing a songduring a cultural program organized by Udayani asFather Probal Gomes (extreme right) looks on
Father Probal Gomes says a 30-year-old woman has been rescued from a human traffickers' racket in the region. But the woman "is still in shock and guilt, and it will take a few months for us to bring her back to her normal self."
The Jesuit priest directs Udayani (awakening) Social Action Forum (USAF). It launched an anti-human trafficking and safe migration program in June in West Bengal state's 24 Parganas (South) district after getting progressively more involved in the issue of trafficking in the region for three years.
The forum works with the Association for Bengal Collaborators for Development (ABCD), which coordinates Catholic diocesan social services in the state.
Father Gomes said Church NGOs do not take on the traffickers directly but work through women's self-help groups, village youths and others.
"If we do not create awareness among the people of this district, many would be lost forever, not only to the sex trade but also through cheap labor rackets."
ABCD director Father Ignatius Philo Sarto describes West Bengal as one of the most disaster-prone states in India. "Human trafficking has been one of the most common problems in the area for the past 20-30 years," he said, adding that his association wants to tackle the problem with help from other Christian groups.
According to data from the National Crime Records Bureau, West Bengal accounted for 61 of the 149 cases of trafficking in women registered at the national level in 2005. But local media say the official data are only the tip of an iceberg.
Father Gomes said USAF plans a comprehensive survey to gauge the true scale of the problem in the district, but it "may take about six months before we get the results."
Meanwhile, the Jesuit center has launched awareness campaigns in Christian schools on the issue of human trafficking.
"Even children in the 9-14 age group are fully aware of what is happening in their locality," the priest said.
USAF field officer Sorodindu Biswas played a key role in the group's first rescue. He said a police officer had offered the woman a check for 25,000 rupees (US$525) if she volunteered to work outside the state.
She was saved "in the nick of time" only because she had no bank account or means to cash the check, Biswas told UCA News. "That is how we came to know about the human trafficking racket," in which a senior police official also was involved, he said.
After being rescued, the woman told USAF staff she has an 11-year-old son and was desperately looking for funds to pay back money her husband had borrowed to set up a snack shop in their village.
Biswas explained that gangs generally look for women in the 15-30 age group, especially those with family and financial problems, and send most of the women the lure away to Persian Gulf countries.
He added that the Jesuit center had sought the help of the local village body to save the woman. The incident has given USAF "some leverage to take up similar cases in future," he said.
As a further measure to prevent trafficking, the Jesuit center has set up local "vigilance committees" in the four areas where it operates.
Each committee comprises self-help group leaders, youth club members, school headmasters and heads of local government bodies.
Father Sarto says they have also organized youths who watch for signs among peers that might indicate they are getting involved with or are vulnerable to traffickers. One behavior that Church NGOs have advised people to watch for is excessive time spent using mobile phones, which can mean someone is working for the racket.
"Our efforts are fruitful when we get support and help from political and police forces," the priest said.
(SOURCE: http://www.ucanews.com/2009/09/18/jesuit-campaign-targets-trafficking-of-women-in-eastern-india/
AMERICA
NOTRE DAME: JENKINS SENDS LETTER RE: PRO-LIFE INITIATIVES
Catholic online reports that President Jenkins sends letter announcing Pro-Life initiatives and a Task Force supporting the 'Choice for Life'. 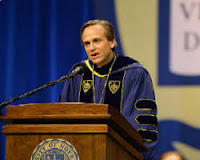 "We have to forgive, but before we can forgive there must be justice," Bishop Basilio do Nascimento said, The Age reports.
Bere allegedly led an attack on a church in the East Timorese town of Suai in September 1999, during which three priests and about 200 civilians were massacred.
In a blunt statement released in Dili, the East Timor NGO Forum described the Government's decision to release Bere on the 10th anniversary of East Timor's vote for independence, on August 30, as a "cheap political decision" that violated the independence of the country's judiciary, The Age report said.
"The NGO Forum and its members condemn the political intervention by the Republic of Indonesia into the judicial sovereignty of Timor Leste ," said the forum, which represents more than 300 organisations.
The forum said Indonesia pressured for Bere's release after he was arrested in the Suai area in mid-August. He had crossed the border from Indonesian West Timor to attend a family funeral.
Bere, a West Timor provincial government official, was indicted by a UN Serious Crimes Tribunal in 2003 on charges of murder, extermination, enforced disappearance, torture, rape, deportation and persecution.
East Timor's President Jose Ramos Horta and Prime Minister Xanana Gusmao secretly arranged Bere's release to Indonesian officials without a court order, The Age says.
(SOURCE: http://www.cathnews.com/article.aspx?aeid=16534

Mystic, born 17 June, 1603; died at Osimo 18 September, 1663; feast, 18 September. Joseph received his surname from Cupertino, a small village in the Diocese of Nardo, lying between Brindisi and Otranto in the Kingdom of Naples. His father Felice Desa, a poor carpenter, died before Joseph was born and left some debts, in consequence of which the creditors drove the mother, Francesca Panara, from her home, and she was obliged to give birth to her child in a stable. In his eighth year Joseph had an ecstatic vision while at school and this was renewed several times; so that the children, seeing him gape and stare on such occasions, lost to all things about him, gave him the sobriquet "Bocca Aperta". At the same time he had a hot and irascible temper which his strict mother strove hard to overcome. He was apprenticed to a shoemaker, but at the age of seventeen he tried to be admitted to the Friars Minor Conventuals and was refused on account of his ignorance. He then applied to the Capuchins at Martino near Tarento, where he was accepted as a lay-brother in 1620, but his continual ecstasies unfitted him for work and he was dismissed. His mother and his uncles abused him as a good-for-nothing, but Joseph did not lose hope. By his continued prayers and tears he succeeded in obtaining permission to work in the stable as lay help or oblate at the Franciscan convent of La Grotella near Cupertino. He now gave evidence of great virtues, humility, obedience, and love of penance to such an extent that he was admitted to the clerical state in 1625, and three years later, on 28 March he was raised to the priesthood. Joseph was but little versed in human knowledge, for his biographers relate that he was able to read but poorly, yet infused by knowledge and supernatural light he not only surpassed all ordinary men in the learning of the schools but could solve the most intricate questions.
His life was now one long succession of visions and other heavenly favours. Everything that in any way had reference to God or holy things would bring on an ecstatic state: the sound of a bell or of church music, the mention of the name of God or of the Blessed Virgin or of a saint, any event in the life of Christ, the sacred Passion, a holy picture, the thought of the glory in heaven, all would put Joseph into contemplation. Neither dragging him about, buffeting, piercing with needles, nor even burning his flesh with candles would have any effect on him - only the voice of his superior would make him obey. These conditions would occur at any time or place, especially at Mass or during Divine Service. Frequently he would be raised from his feet and remain suspended in the air. Besides he would at times hear heavenly music. Since such occurrences in public caused much admiration and also disturbance in a community, Joseph for thirty-five years was not allowed to attend choir, go to the common refectory, walk in procession or say Mass in church, but was ordered to remain in his room, where a private chapel was prepared for him. Evil-minded and envious men even brought him before the Inquisition, and he was sent from one lonely house of the Capuchins or Franciscans to another, but Joseph retained his resigned and joyous spirit, submitting confidently to Divine Providence. He practised mortification and fasting to such a degree, that he kept seven Lents of forty days each year, and during many of them tasted no food except on Thursdays and Sundays. His body is in the church at Osimo. He was beatified by Benedict XIV in 1753, and canonized 16 July 1767 by Clement XIII; Clement XIV extended his office to the entire Church. His life was written by Robert Nuti (Palermo, 1678). Angelo Pastrovicchi wrote another in 1773, and this is used by the Bollandist "Acta SS.", V, Sept., 992.
(SOURCE: http://www.ewtn.com/saintsHoly/saints/J/stjosephofcupertino.asp)

Our Lord gives to souls of prayer a deep understanding of Himself. He never deceives them.
-- St. Peter Julian Eymard

Matthew 11: 25 - 30
25
At that time Jesus declared, "I thank thee, Father, Lord of heaven and earth, that thou hast hidden these things from the wise and understanding and revealed them to babes;
26
yea, Father, for such was thy gracious will.
27
All things have been delivered to me by my Father; and no one knows the Son except the Father, and no one knows the Father except the Son and any one to whom the Son chooses to reveal him.
28
Come to me, all who labor and are heavy laden, and I will give you rest.
29
Take my yoke upon you, and learn from me; for I am gentle and lowly in heart, and you will find rest for your souls.
30
For my yoke is easy, and my burden is light."