The Holy See Press office reports the following from the Pope's Catechesis which he gave today.
(Exact text with Internet translation)


Catholic Online reports Former President Bill Clinton flew to North Korea seeking the release of two journalists. He returns to the U.S. with both of them free.

The Central News Agency said this was a sign of North Korea's 'humanitarian and peaceloving policy.' The two American journalists imprisoned by North Korea on spy charges received a special pardon and were freed by North Korean Leader Kim Jong Il after talks with former President Bill Clinton. Laura Ling and Euna Lee, who were arrested near the China-North Korean border on March 17. According to reports from North Korean media, former President Clinton apologized on behalf of the two women and expressed President Obama’s gratitude for their possible release during talks that were reported as “exhausting.” The families of both journalists told USA Today that they were overjoyed with news of the sudden pardon and thanked the former President and his Vice President for their assistance. Questions were immediately posed as to other topics that may have been discussed by the two leaders, including nuclear arms. Clinton did carry a message from President Obama expressing ways to improve relations

between the two countries. (Edited & with picture from: http://www.catholic.org/international/international_story.php?id=34206

This picture from AFP shows the journalist reunited with her daughter.

The Straitstimes reports that actor Martin Sheen and his actor-director son Emilio Estevez plan to shoot a movie on the ancient pilgrimage route across northern Spain to the city of Santiago de Compostela, local officials said.
Sheen and his son presented the project to the president of the regional government of Galicia, Emilio Perez Tourino on Tuesday at a meeting in Madrid.
'The film, which will have as its settings Santiago and several areas of the Galician coast will start being shot before the summer,' a statement by the Galician government said.
Sheen, whose father is from Galicia - a rugged fishing region near Portugal - hopes to employ local actors and film producers in the making of the movie.
During his meeting with Tourino, the actor expressed his 'desire to settle an historical debt with his father's land and he though a movie would be the best way to do this,' the statement said.
Nowadays, the 'Way of St. James' or 'El Camino de Santiago' pilgrimage route usually begins in the Pyrenees mountain range of the Spanish-French border and ends at Santiago's cathedral where the faithful believe the remains of St. James the Apostle lie.
The cathedral has drawn millions of pious travelers from around the world since the Middle Ages.
Some who make the journey today still wear the traditional garb of cape, long staff and carling felt cap adorned with scallop shells, the symbol of the the saint which can be found all over the city. -- AFP

UCAN reports that widows and poor rural women in Kompong Cham area are now learning livelihood skills, thanks to the recent opening of a Church-run center.

The Society of St. Martha center, jointly operated by Kompong Cham parish, Caritas Cambodia and the Society of St. Vincent de Paul, has been training them to make Khmer and Western sweets and desserts since it opened in June.
Ten women aged 35-50 years study at the center for two hours every afternoon from Monday to Friday, according to Rose Yip, the center's coordinator. The course takes up to four months to complete, she said.
The program is open only to poor or widowed women, Yip explained, adding that come on bicycles from as far as eight kilometers away. She said the center has engaged two volunteers from Singapore, in addition to several local Cambodians, as instructors.
As most of the course participants are illiterate, they also attend a Khmer literacy class at the nearby Caritas office after their cooking class. This is because trainees need to write down the recipes they learn, Yip explained.
Dy Von, 48, a trainee, said she has learned to make five different Khmer sweets while at the same time learning to read and write Khmer. She needs to help support her family of four children and her farmer husband during the non-growing season, she said. Yip said the center helps participants plan for their future and also loans them money to start their own businesses.
According to her, the center has received around US$4,000 from French and Singaporean donors, half of which was spent on the building and equipment. The center spends up to US$2 each day on cooking ingredients, she said.
Kompong Cham is the base of one of three Church jurisdictions in the country. The others are based in Phnom Penh and Battambang.
(Edited with picture from: http://www.ucanews.com/2009/08/05/vocational-center-provides-hope-for-widows-poor-women/

CISA reports that 2 Catholic churches were among 11 that were extensively damaged last week in this northeastern Nigerian town during clashes between security forces and a fundamentalist Muslim sect.Maiduguri is the stronghold of Boko Haram, a sect that opposes Western education and other values. More than 700 people were killed in a five-day uprising by the sect across northern Nigeria. The crisis ended on Thursday with the capture and killing of sect leader Muhamed Yusuf, 39.Fr Heladuwa John William, the Diocesan Administrator of Maiduguri, said in a statement that the sect planned the mayhem at a meeting on the July 19. “This meeting, held in an open place around the Railway Terminus in Maiduguri, is what led to the five day attack on innocent citizens and properties.”The chaos left Maiduguri town in complete disorder, with bodies of the dead strewn on the streets, the priest said. Police stations were targeted for attack.Fr Heladuwa gave the names of the destroyed Catholic churches as St Joseph Gamboru Ngala and St. Michael Railway. The latter church was recently rebuilt and commissioned after similar riots in February 2006. It was completely burnt down. The other nine places of worship were evangelical churches.“
(Edited from: http://www.cisanewsafrica.org/story.asp?ID=4059)

AUSTRALIA
SISTERS OF CHARITY HAVE A LAY OUTREACH: MAY AIKENHEAD MINISTRIES

CathNews Australia reports that the Sisters of Charity have established a new lay arm, Mary Aikenhead Ministries, to succeed the religious order's work in various health and aged care, education and some welfare ministries into the future.
Mary Aikenhead Ministries launched on July 1 and it will be governed by a group of Trustees, consisting initially of two members of the Congregation and three lay colleagues.
The order said in a media release the new entity was granted canonical status as a Public Juridic Person (PJP) of Pontifical Right by the Congregation for Institutes of Consecrated Life and Societies of Apostolic Life. "While there will be little change to the daily management of our institutions, this change in governance will enable us to ensure that the work begun by the Sisters will continue, grow and flourish in the future through gifted and dedicated lay leadership," said Congregational Leader, Sr Annette Cunliffe.
"Our congregation's spirit and our inheritance is the gospel privilege of serving others, especially the poor. Our story is one of innovation, courage and conviction. It is our hope that this will continue through Mary Aikenhead Ministries and the spirit of service will evolve in new and radical ways, always alive to the needs of the times."
The health ministries of Mary Aikenhead Ministries include St Vincents and Mater Health Sydney, St Vincent's Clinic Sydney, St Vincent's and Holy Spirit Health in Queensland, St Vincent's Hospital, Melbourne as well as St Vincent's and Mercy Private Hospital.
Its education ministries include St Vincent's College, Potts Point NSW, Mt St Michael's College, Ashgrove Qld, St Columba's College, Essendon Vic and Catholic Ladies College, Eltham Vic.
Some of its welfare ministries include The Sisters of Charity Outreach in Sydney and Toowoomba. (Edited from: http://www.cathnews.com/article.aspx?aeid=15588 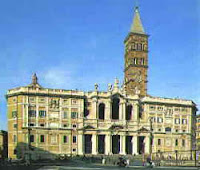 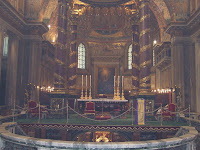 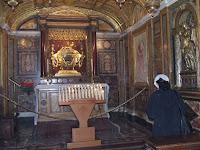 THERE are in Rome three patriarchal churches, in which the Pope officiates on different festivals. These are the Basilics of St. John Lateran, St. Peter's on the Vatican Hill, and St. Mary Major. This last is so called because it is, both in antiquity and dignity, the first church in Rome among those that are dedicated to God in honor of the Virgin Mary. The name of the Liberian Basilic was given it because it was founded in the time of Pope Liberius, in the fourth century; it was consecrated, under the title of the Virgin Mary, by Sixtus III., about the year 435. It is also called St. Mary ad Nives, or at the snow, from a popular tradition that the Mother of God chose this place for a church under her invocation by a miraculous snow that fell upon this spot in summer, and by a vision in which she appeared to a patrician named John, who munificently founded and endowed this church in the pontificate of Liberius. The same Basilic has sometimes been known by the name of St. Mary ad Præsepe, from the holy crib or manger of Bethlehem, in which Christ was laid at His birth. It resembles an ordinary manger, is kept in a case of massive silver, and in it lies an image of a little child, also of silver. On Christmas Day the holy Manger is taken out of the case, and exposed. It is kept in a sumptuous subterraneous chapel in this church.(Edited from http://www.ewtn.com/ )
BLESSED FREDERIC JANSSOONE

Blessed Frederic Janssoone was born in Flanders in 1838. Frederic the was the youngest of thirteen children. He was nine when his father died. Frederic was ordained a Franciscan priest. He became a military chaplain. He built a church in Bethlehem. Blessed His ministry in Canada began when he was transferred there in 1881. Father Frederic died on August 4, 1916.
SAINTLY QUOTE

TODAY'S GOSPEL
Matthew 15: 21 - 28
And Jesus went away from there and withdrew to the district of Tyre and Sidon.
And behold, a Canaanite woman from that region came out and cried, "Have mercy on me, O Lord, Son of David; my daughter is severely possessed by a demon."
But he did not answer her a word. And his disciples came and begged him, saying, "Send her away, for she is crying after us."
He answered, "I was sent only to the lost sheep of the house of Israel."
But she came and knelt before him, saying, "Lord, help me."
And he answered, "It is not fair to take the children's bread and throw it to the dogs."
She said, "Yes, Lord, yet even the dogs eat the crumbs that fall from their masters' table."
Then Jesus answered her, "O woman, great is your faith! Be it done for you as you desire." And her daughter was healed instantly.
Posted by Jesus Caritas Est at 6:20 PM