COMMUNICATION FROM THE PRESS ROOM OF THE SANTA:
DECLARATION OF HOLY FATHER SIBIRSKY MEDICAL
STAFF. PATRICIAN POLISCA
His Holiness Benedict XVI, this morning, in the Apostolic Palace of Castel Gandolfo, had his cast removed. It was carried out a radiografa check which highlighted the consolidation of the divide. The doctor said the results were optimum. He will now begin therapy for the use of his wrist.
(Edited from http://www.vatican.va/)

ASIA
SRI LANKA: REFUGE FOR WAR WIDOWS & CHILDREN
UCAN reports as Tamil people languish in refugee camps after the end of the civil war, widows and children appear to be the ones hardest hit by the situation.

40 DAYS FOR LIFE FALL CAMPAIGN
CNA reports that the 40 Days for Life campaign is preparing for the launch of its fall campaign in 209 cities in 45 U.S. states, five Canadian provinces and Denmark. 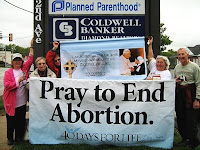 The campaign is to take place from September 23 to November 1. The community-based campaign involves 40 days of prayer and fasting for an end to abortion, 24/7 peaceful vigils outside abortion facilities, and grassroots educational outreach.
David Bereit, national director of 40 Days for Life, said the organization was “incredibly encouraged to see record numbers of people in cities across America willing to take a stand.”
He added that participants will “speak up for those who cannot speak for themselves and seek God's protection for innocent children in the womb -- and mothers -- at risk of abortion.”
Bereit said the campaign takes place at a time when abortion advocates are trying to “exploit” the current health care reform debate to mandate taxpayer funding for abortion.
Bereit is also working with the Stop the Abortion Mandate coalition, which successfully urged more than 36,000 Americans to voice their opposition to what the coalition characterized as an abortion mandate in health care reform proposals.
The 40 Days for Life website is at http://40daysforlife.com/
(Edited from: http://www.catholicnewsagency.com/new.php?n=16900)
EUROPE
MUSIC & LITURGY SUMMER SCHOOL WELL ATTENDED
A record number of people attended a music and liturgy summer school in Norfolk during the week of August 3. One hundred and eight participants, including clergy, religious and laity from all over the country and as far away as Denmark, converged on St Ga

briel's conference centre in Ditchingham for the five-day course organised by the Society of St Gregory (SSG). The theme for the week was "As we wait in joyful hope" and keynote addresses on the theme of Christian hope were given by the Bishop Michael Evans of East Anglia, by his vicar general, Mgr Tony Rogers, and by Ann Blackett, from the Diocese of Nottingham liturgy commission. Workshops looked at various aspects of church music and liturgy, including sessions on composition led by internationally renowned composer Christopher Walker. Other workshops included planning liturgies, proclaiming the Word, and sight-reading music. There were also seminars on liturgy and devotion, diversity of liturgical practice and musical repertoire. The week was co-ordinated by Fr Timothy Menezes, lecturer in liturgy at Oscott College Birmingham and parish priest in Coventry. The musical director was Paul Wellicome, editor, composer and parish musician at Our Lady's parish, Lillington, Warwickshire.The undoubted highpoint of the week was the celebration of Mass for the Feast of the Transfiguration on August 6. The SSG is the national society for liturgy and music in the Catholic Church in the British Isles. It was founded in 1929, continues to flourish and is delighted to welcome Christians of any denomination who seek to achieve similar aims through liturgy, music and the arts. (SOURCE: http://www.catholicherald.co.uk/life/cl0000435.shtml

the heart works, inspired by the experience of 5 year old schoolmate Kiara Lloyd's heart transplant.
Kiara was diagnosed with cardiomyopathy and her parents were told when she was 2 and a half years old that she would die by age 5 without a heart transplant.
She couldn't run or play, and speaking more than a few words turned her blue, the Daily Telegraph reported. She underwent a successful transplant late last year.
"We wanted to explain the human body but that was too much for a three minute video so we did the heart," student Emma Gale, 11, said. "And we thought it would be great if we did it with Kiara because of her heart, so she joined our team."
The video, Kiara's Gift, won the primary division of the University of Sydney Sleek Geeks Science Eureka Prize.
The students from Years 3 to 6 researched, wrote, produced and acted in the film which won the primary division of the prestigious science award sponsored by the University of Sydney and the Australian Museum, the Sydney Catholic Education office said.
The students are donating the $1,000 prize to the Heart Foundation.
To see a movie clip of the girl:http://www.ceosyd.catholic.edu.au/cms/Jahia/op/edit/pid/4154
(SOURCE http://www.cathnews.com/article.aspx?aeid=15906

Born 2 June, 1835, at Riese, Province of Treviso, in Venice. His parents were Giovanni Battista Sarto and Margarita (née Sanson); the former, a postman, died in 1852. In 1850 he received the tonsure from the Bishop of Treviso, and was given a scholarship of the Diocese of Treviso in the seminary of Padua, where he finished his classical, philosophical, and theological studies with distinction. He was ordained in 1858, and for nine years was chaplain at Tombolo, having to assume most of the functions of parish priest, as the pastor was old and an invalid. In 1867 he was named arch-priest of Salzano, a large borough of the Diocese of Treviso, where he restored the church, and provided for the enlargement and maintenance of the hospital by his own means, consistently with his habitual generosity to the poor; he especially distinguished himself by his abnegation during the cholera. In 1875 he was made a canon of the cathedral of Treviso, and filled several offices, among them those of spiritual director and rector of the seminary, examiner of the clergy, and vicar-general; moreover, he made it possible for the students of the public schools to receive religious instruction. In 1878, on the death of Bishop Zanelli, he was elected vicar-capitular. On 10 November, 1884, he was named Bishop of Mantua, and consecrated on 20 November. In 1887 he held a diocesan synod.
At the secret consistory of June, 1893, Leo XIII created him a cardinal under the title of San Bernardo alle Terme; three days later, he was preconized Patriarch of Venice. In 1898 he held the diocesan synod. Giuseppe Sarto was elected Pope on 4 August, 1903.
In his first Encyclical, wishing to develop his programme to some extent, he said that the motto of his pontificate would be "instaurare omnia in Christo" (Ephesians 1:10). He advised all to receive Holy Communion frequently and, if possible, daily, dispensing the sick from the obligation of fasting to the extent of enabling them to receive Holy Communion twice each month, and even oftener. Finally, by the Decree "Quam Singulari", he recommended that the first Communion of children should not be deferred too long after they had reached the age of discretion. It was by his desire that the Eucharistic Congress of 1905 was held at Rome, while he enhanced the solemnity of subsequent Eucharistic congresses by sending to them cardinal legates. The fiftieth anniversary of the proclamation of the dogma of the Immaculate Conception was an occasion of which he took advantage to enjoin devotion to Mary (Encyclical "Ad illum diem", 2 February, 1904); and the Marian Congress, together with the coronation of the image of the Immaculate Conception in the choir of St. Peter's, was a worthy culmination of the solemnity. As a simple chaplain, a bishop, and a patriarch, Giuseppe Sarto was a promoter of sacred music; as pope, he published, 22 November, 1903, a Motu Proprio on sacred music in churches, and at the same time ordered the authentic Gregorian Chant to be used everywhere, while he caused the choir books to be printed with the Vatican font of type under the supervision of a special commission. In the Encyclical "Acerbo nimis" (15 April, 1905) he treated of the necessity of catechismal instruction, not only for children, but also for adults, giving detailed rules, especially in relation to suitable schools for the religious instruction of students of the public schools, and even of the universities. He caused a new catechism to be published for the Diocese of Rome.
(Edited from: http://www.ewtn.com/saintsHoly/saints/P/stpiusx.asp

SAINTLY QUOTE
The devil strains every nerve to secure the souls which belong to Christ. We should not grudge our toil in wresting them from Satan and giving them back to God. St. Sebastian
TODAY'S GOSPEL
Matthew 22: 34 - 40
34
But when the Pharisees heard that he had silenced the Sad'ducees, they came together.
35
And one of them, a lawyer, asked him a question, to test him.
36
"Teacher, which is the great commandment in the law?"
37
And he said to him, "You shall love the Lord your God with all your heart, and with all your soul, and with all your mind.
38
This is the great and first commandment.
39
And a second is like it, You shall love your neighbor as yourself.
40
On these two commandments depend all the law and the prophets."
Posted by Jesus Caritas Est at 10:36 AM