Love of Jesus in the Eucharist 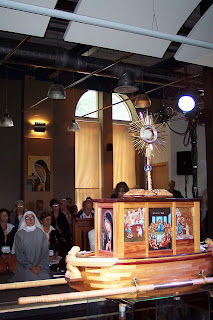 The Eucharistic Congress in Quebec City evoked a greater love for Our Lord Jesus in the Eucharist. This was a beautiful commemoration of the 400th anniversary of Quebec. Effigies of the saintly Bishop Laval, first Bishop of Canada, Marie de l’Incarnation, St. Dina Belanger, Jean de Brebeuf, Kateri Tekakwitha and other Canadian Saints were made in honour of these founders. The approximately 15,000 people gathered for the week long activities and they exuded love of God and neighbour. The joy of the participants was felt as one walked through the streets noticing the smiles on the faces of the people. Rosaries, Mercy Chaplets and other invocations were being prayed as people participated. Songs and music in praise of the Creator filled the air. There was a peacefulness within the city; a Divine presence. Two large Eucharistic chapels were available for Adoration. Here thousands adored our Lord Jesus in His Real Presence in the Eucharistic Host. Many people frequented Confession which was available before each Holy Mass. Cardinals, Bishops, priests, religious and lay people gave talks on the many aspects of the Catholic Faith. The people came from every corner of the World to share in the Fellowship and love of Christ. Men, women and children came from Africa, Europe, Australia, South America, and Asia. Many orders of Nuns, Brothers and Priests were there in groups. Some newer orders were there. Among them were the Missionaries of Charity (of Mother Teresa), Dominicans (www.dominicans.org) , Franciscans, Carmelites (www.carmelites.net) , Marie-Jeunesse (www.marie-jeunesse.org ), Lumen Dei, Monasteries of Jesrusalem (www.sdssm.org ) and many others. In one building kiosks were available for the participants to obtain free information from Catholic organizations. Notable among these were; EWTN (www.ewtn.com ), Our Lady Seat of Wisdom Academy (College in ON, www.seatofwisdom.org ), Campaign Life Coalition www.campaignlifecoalition.com , www.lifesitenews.com, www.familiacanada.net, the Priestly Fraternity of St. Peter (www.fssp.com ), Knights of Columbus (www.kofc.org ), Pilgrims of St. Michael (www.versdemain.org ), Foundation of Mary Immaculate (Bromptonville, Qc) and many others. Approximately 1,500 priests were there, with 250 Bishops and 40 Cardinals. Salt and Light TV provided extensive coverage which was then broadcast to EWTN. Many other television, radio, print, and Internet media were present from Canada and other countries. The highlights of the event were the Eucharistic procession for 3 ½ hours through the streets of Quebec, the Ordination Mass of 12 Quebec Priests, and the culminating Mass on the Plains of Abraham with upwards of 50,000 people. The Holy Father Pope Benedict XVI sent messages & blessings to all involved. Dignitaries at the event included Jean Charest, Jason Kenny and Governor General Michaëlle Jean. Greater participation at Holy Mass and increased Eucharistic Adoration programs are foreseen. It is hoped that this event will bring fruits of many vocations and of greater Charity toward God and neighbour in Canada and the world in the days to come.