CATHOLIC NEWS: POPE DICTATES HIS WORKS
Vatican Radio reports that the Director of the Holy See Press Office said the Pope is “well” and “in a good mood”. He says the Pope is “learning how to live with a wrist in plaster and has been equipped with a small recorder to dictate his thoughts, as he is unable to use a pen with ease these days”. Fr Lombardi adds that the Pope is “also in regular communication by telephone with his brother”, with whom he has a close relationship. In a few days, his brother, Msgr Georg Ratzinger, “will be at Castelgandolfo to spend the weeks of August together with the Pope, as has been

customary in past years”. . .
On Friday Pope Benedict XVI will preside over Vespers in the cathedral of the city of Aosta. Finally, on his return to Introd, he will also visit and greet guests of a local retirement home
(With files & images from: http://www.radiovaticana.org/en1/Articolo.asp?c=304302)
VATICAN CITY
POPE'S NEW ENCYCLICAL IS PROMOTED
VIS reports that a congress organised by the Magna Charta Foundation met to study the Pope's recent Encyclical. The theme was "Beyond the ideology of crisis. Development, ethics and the market in 'Caritas in veritate'". It was held on the 21 July, in the Roman church of Santa Marta. In the St. Pius X auditorium in Rome a meeting was held on the theme "'Caritas in veritate', an Encyclical for understanding the future". (With files from VIS 090722 (180)

VIS also reports that Pope Benedict appointed Bishop Arlindo Gomes Furtado of Mindelo, Cape Verde, as bishop of Santiago de Cabo Verde (area 1,803, population 345,000, Catholics 327,750, priests 40, religious 105), Cape Verde. He succeeds Bishop Paulino Do Livramento Evora C.S.Sp., whose resignation from the pastoral Care of the same diocese the Holy Father accepted, upon having reached the age limit. - Accepted the resignation from the pastoral care of the prelature of Coari, Brazil, presented by Bishop Joercio Goncalves Pereira C.SS.R., in accordance with canon 401 para. 2 of the Code of Canon Law. (With files from VIS 090722 (110)

DEATH OF BISHOP IN CHINA
UCAN reports the death Bishop Damas Zhang Hanmin of Jilin in northeastern China on July 19. It is believed the 88-year-old prelate died in his sleep of a heart attack.
He was recognized by the Chinese government and approved by the Vatican.
His funeral Mass and memorial service are scheduled for July 23 at the St. Theresa's Cathedral. It was said that the Bishop, "Wherever he made pastoral visits, he asked parish priests not to be extravagant".
Father Dong, said the bishop often told him and other seminarians to be devoted to prayer. "All priests, nuns and laypeople are grieving over the loss of our good shepherd," he added.
The Bishop was born in 1922, was a native of Bajia village, regarded as the cradle of Catholicism in Jilin. He received his religious education from his parents and "the seed of priestly vocation sprouted in his heart since he was a child," according to the diocese's obituary.

He entered the minor seminary in Jilin and then went on to the major seminary in Beijing. After the seminary stopped functioning due to political turmoil in early 1950s, Bishop Zhang worked as a foreign language teacher from 1953. He was able to speak Latin, English, Japanese, Russian and French.
In 1983, he returned to Jilin diocese and was ordained a priest at the age of 61. He had served at several parishes before he was elected as diocesan administrator in 1995 and bishop of Jilin in 1997.
Bishop Zhang headed the government-sanctioned Jilin's Provincial Catholic Patriotic Association and Church Affairs Commission. He was also a member of the provincial People's Political Consultative Conference, an advisory body of the local government.
The diocese currently has 60 priests serving about 70,000 Catholics.
(With files & image from:http://www.ucanews.com/2009/07/21/jilin-bishop-dies-at-age-88/)
AMERICA
US BISHOPS PROMOTE PRO-LIFE HEALTH CARE
“Genuine health care reform that protects the life and dignity of all is a moral imperative and a vital national obligation,” said Bishop William F. Murphy of Rockville Centre, N.Y.,in a July 17 letter to Congress. Writing on behalf of the bishops as chairman of their Committee on Domestic Justice and Human Development, Bishop Murphy said the bishops have advocated comprehensive health care reform for decades and recommended four criteria for fair and just health care reform: respect for human life and dignity, access for all, pluralism and equitable costs. “Two of these criteria need special attention as Congress moves forward with health care reform,” Bishop Murphy said. He said, “No health care reform plan should compel us or others to pay for the destruction of human life, whether through government funding or mandatory coverage of abortion. Any such action would be morally wrong.” “Health care reform cannot be a vehicle for abandoning this consensus which respects freedom of conscience and honors our best American traditions. Any legislation should reflect longstanding and widely supported current policies on abortion funding, mandates and conscience protections because they represent sound morality, wise policy and political reality.” “All people need and should have access to comprehensive, quality health care that they can afford, and it should not depend on their stage of life, where or whether they or their parents work, how much they earn, where they live, or where they were born. The Bishops’ Conference believes health care reform should be truly universal and it should be genuinely affordable.”
(This story was written by the USCCB & edited for JCE News:http://www.usccb.org/comm/archives/2009/09-161.shtml)
AFRICA 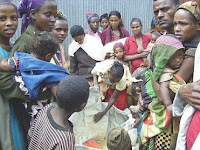