VIS reports that the Pope sent Bishop Maurice Piat C.S.Sp. of Port Louis, Mauritius, a telegram about death of Cardinal Jean Margeot, bishop emeritus of that diocese. He died on July 17 at the age of 93. The Pontiff said he was in "profound union in prayer with the diocese of Port-Louis, with the family of the deceased and with everyone affected by this loss. Entrusting him to the mercy of the Lord, I give thanks to God for the ministry of this zealous pastor who dedicated his entire life to the inhabitants of the Isle of Mauritius, as diocesan priest then as bishop of Port-Louis, giving the best of himself that Christ might be announced, especially through his generous commitment to serving the defence and promotion of the family. "By the maternal intercession of the Virgin Mary, mother of the Church, may the Lord welcome His faithful servant into His Kingdom of peace and light. Upon you, upon the faithful of the diocese, upon the relatives of the deceased and upon everyone who gathers for the funeral liturgy," the Pope concludes, "I impart a heartfelt apostolic blessing". (With files from: VIS 090720 (210)

Msgr. Giovanni Carru, under secretary of the Congregation for the Clergy, as a member of the Pontifical Commission for Sacred Archaeology, and secretary of that pontifical commission.

Fabrizio Bisconti, secretary of the Pontifical Commission for Sacred Archaeology, as archaeological superintendent for the catacombs.(With files from VIS 090720 (90)

The Pope travelled to Romano Canavese in the region of Piedmont, birthplace of Cardinal Secretary of State Tarcisio Bertone S.D.B. The Pope prayed the Angelus with three thousand faithful. He called Bertone "my closest collaborator, as he was for a number of years in the past when I was head of the Congregation for the Doctrine of the Faith". The Pope also said; "As you see because of my accident my agility is somewhat limited, yet I am fully here in heart and am filled with joy to be among you". He offered this message to the people "Providence always helps people who work for good and are committed to justice, ... people who think not only of themselves but also of those less fortunate. You know this well because your forebears were compelled to emigrate because of a lack of work, but then economic development brought wellbeing and others have immigrated here from Italy and from abroad. The fundamental values of the family and respect for human life, sensitivity to social justice, an ability to face hardship and sacrifice, the powerful bond with Christian faith through parish life and especially through participation in Mass, have for many centuries been your true strength. These same values will allow today's generation to build their future with hope, giving life to a truly united and fraternal society in which ... institutions and the economy are permeated with evangelical spirit. "I particularly address the young", he added. "It is important to ask what kind of culture is proposed to them, what examples and models they are presented with, and to decide if they are such as to encourage them to follow the ways of the Gospel and of true freedom. Young people are full of resources, but they must be helped to overcome the temptation to follow easy and illusory paths, and to find their way to the true and full Life". (With files from: VIS 090720 (560) 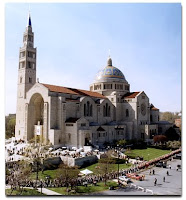 CHURCH MUSIC ASSOCIATION PILGRIMAGE WASHINGTON
(This story is from the CMAA site)
The Church Music Association of America is having a Pilgrimage on September 25-26, 2009. Chant instruction will be taught by Scott Turkington and lectures by William Mahrt (Stanford University and president of the CMAA). The final Mass in the Extraordinary Form, celebrated in the Crypt Church of the National Shrine, with fully chanted ordinary and propers. The Organist will be David Lang, Organist and Choirmaster at St. John the Beloved in McLean. Choral motets will be sung by the Choir of the National Shrine directed by Dr. Peter Latona.
The trip also includes conditions for gaining the Jubilee Year Plenary Indulgence.
Tuition is $110 for all sessions and materials, including a copy of the Parish Book of Chant, compiled and edited by Richard Rice, composer-in-residence at St. John the Beloved. You will receive all materials upon arrival. Minimum age for registrants: 15.
The conference is for beginning chanters, advanced chanters, or anyone in between, including those who love and appreciate the central role that chant plays as the prayerful song of the Roman Rite - not only at cathedrals and Basilicas but also in every parish. The conference will both train and inspire toward the goal of continuing the renaissance of sacred music in our time, both in the ordinary and extraordinary form of the Mass.
SCHEDULE
Friday, September 2512:30 -1:30pm: Registration; JPII Cultural Center1:30-1:45pm: Welcome; JPII Cultural Center Auditorium1:45 – 2:45pm: Chant rehearsal; JPII Cultural Center Auditorium2:45 – 3:00pm: Break3:15 - 4:30pm: Chant rehearsal resumes at the National Shrine, Upper Church, Blessed Sacrament Chapel4:45 - 6:00pm: Reception; JP II Cultural Center, RotundaDinner on your own
Saturday, September 269:00 - 9:30am: Coffee and Pastries; JPII Center Auditorium9:30 - 10:45am: Chant rehearsal; JPII Center Auditorium10:45-11:00am: BREAK11:00 - 12:00pm: Chant rehearsal; JPII Auditorium12:00 – 1:00pm - Catered Lunch; JPII cafe1:00 - 1:30pm – Lecture: “Active Participation and Listening to Chant,” Dr. William Mahrt; JPII Auditorium1:45 - 3:45pm - Chant rehearsal; Crypt Church, National Shrine3:45 - 4:00pm: BREAK4:15pm: Recitation of the Rosary; National Shrine, Upper Church, Blessed Sacrament Chapel5:00 pm – EF MASS; Crypt Church, National Shrine
Suggested Hotels
Bloomingdale Inn, close by, charming, affordable
Howard Johnson Express Inn Washington, 600 New York Avenue NE, 202-546-9200
Days Inn Washington DC/Gateway, 2700 New York Avenue NE, 202-832-5800
Days Inn Washington DC Connecticut Avenue, 4400 Connecticut Avenue, 202-244-5600.
Registration deadline is Monday, September 14th. Your registration will be considered complete after following the two-step process: 1) registration (done when you click on “send email”) and 2) fee payment (done when you have visited the Pay Pal page and submitted a payment or have paid with a check by mail) . 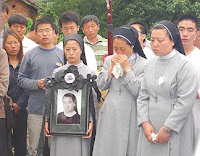 UCAN reports that approximately 200 lay Catholics, nuns and priests came to the funeral of a nun, whose body was found in June after having gone missing for several months.

Sister Gonzaga Hu Xiaojuan was of the Missionary Sisters of theHoly Family. Her funeral was in Jilin diocese, in northeastern China, was held on July 20. She froze to death in a culvert.
Sister disappeared Dec. 28, after she "went out for a walk" she had gone to seek treatment for a psychological condition.
Sister Hu was born in 1965 and entered the congregation in 1988. She studied in Germany and the United States, and obtained a master's degree in pastoral theology. She was the mistress of novices, vice superior general, councilor and was responsible for formation.
(With files & picture from: http://www.ucanews.com/2009/07/20/catholics-mourn-death-of-nun-who-went-missing/)
AFRICA
BISHOP ASKS FOR JUSTICE FOR VIOLENCE
(this story is taken from allafrica.com)
According to All Africa.com the International community has been asked that key leaders implicated in the post-election violence are prosecuted to end impunity in Kenya.
Eldoret Catholic Bishop Cornelius Korir led priests in demanding that the era of impunity in Kenya must come to the end and those responsible for last year's post-election violence to be prosecuted.
Bishop Korir said "the Catholic Church wants key leaders implicated in the Waki list and KNCHR lists be tried in Hague and not locally. They are
Bishop Korir and Mosop MP David Koech said Kenyans had little faith in the local Judiciary and best way to end impunity was to punish all suspects who organised the killings of more than 1300 innocent Kenyans and destroyed property.
Mr Koech said it was in the interest of Kenyans for the suspected leaders to be prosecuted at The Hague regardless of their position in the country, if proven they financed and sponsored post-election violence.
He added that parliament had voted for the Hague and that leaders who took part in planning violence against fellow Kenyans should be ready to stand trial.
Bishop Korir, who addressed a larger crowd of Catholic faithful during the ordination of Father Luke Kipkoech Bett at St Peters Catholic Church in Kapsabet, said the church wants all those involved arrested and prosecuted if proven guilty.
The Bishop also said facts must be produced to prove the suspected leaders were involved in planning violence and Kenyan leadership should not protect them
(This story is from: http://allafrica.com/stories/200907201192.html)
AUSTRALIA
(This story is edited from CathNews Aust.)
ISSUES ABOUT RELIGIOUS FREEDOM
Churches, religious leaders, parents and private schools said they will defend discrimination based on faith in the face of a review of Victoria's Equal Opportunity Act and its exemptions, a news report said.
The groups said religious freedoms, such as the right to insist the upholding of the organisations' beliefs, are at risk. Under the 53 exceptions and exemptions to the Equal Opportunity Act, a religious organisation can insist on staff sharing its belief. The Law Institute of Victoria, community legal advocates and the Victorian Equal Opportunity and Human Rights Commission recommended changes to make it more difficult for religious groups and schools to discriminate against people in "non-core" roles - those not directly relating to worship or the teaching of faith, such as pastors and religious education teachers
Religious groups are fiercely rejecting the idea of core and non-core roles.
The advocates for change say existing exemptions are too broad and allow widespread discrimination, particularly against people such as gay teachers in religious schools, and female teachers and staff members who become pregnant out of wedlock.
The Law Institute of Victoria's Dominique Saunders said: "Unless there is a direct link to the observance or teaching of religion, there should be no exception in the laws to discriminate, for example, against a gay maths teacher. I don't think that is acceptable."
The parliamentary review committee will hold public hearings in August and report in October or early November.
(FULL STORY @ http://www.cathnews.com/article.aspx?aeid=15241
TODAY'S SAINT
St. Joseph Barsabbas he is named in the Bible's Acts of the Apostles. Early Church writer, Eusebius, considered Joseph one of the seventy-two disciples.
TODAY'S SAINT QUOTE
When you look at the Crucifix, you understand how much Jesus loved you then. When you look the Sacred Host you understand how much Jesus loves you now. Mother Teresa of Calcutta
TODAY'S GOSPEL
Matthew 12: 38 - 42
Then some of the scribes and Pharisees said to him, "Teacher, we wish to see a sign from you."
But he answered them, "An evil and adulterous generation seeks for a sign; but no sign shall be given to it except the sign of the prophet Jonah.
For as Jonah was three days and three nights in the belly of the whale, so will the Son of man be three days and three nights in the heart of the earth.
The men of Nin'eveh will arise at the judgment with this generation and condemn it; for they repented at the preaching of Jonah, and behold, something greater than Jonah is here.
The queen of the South will arise at the judgment with this generation and condemn it; for she came from the ends of the earth to hear the wisdom of Solomon, and behold, something greater than Solomon is here.