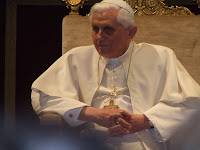 JULY 14, 2009
VATICAN
According to Vatican Information Service Pope Benedict XVI spoke about the recent bombings around 8 Christian Churches in Baghdad, Mosul, Iraq. Four people died and several were injured. The Pontiff sent a message to Cardinal Emmanuel III Delly, patriarch of Babylon of the Chaldeans. The Holy Father "prays for a conversion of heart in the authors of this violence, and encourages the authorities to do everything possible to promote just and peaceful coexistence among all sectors of the Iraqi population". Furthermore he "also gives assurances of his prayers and his spiritual closeness to the Catholic and Orthodox communities of the Iraqi capital". (With files from VIS 090714 (130)
Today, Fr. Bruno Alessio Esposito O.P., was appointed (by the Pope) dean of the faculty of Canon Law at the Pontifical University of St. Thomas Aquinas in Rome, as a consultor of the Congregation for the Doctrine of the Faith. (With files from VIS 090714 (50)
AMERICA
Archbishop Chaput recently spoke with the group of Catholic business about: "Catholics and the 'Fourth Estate,'.
He is quoted as saying: "America's news media have enormous opinion-shaping power," Archbishop Chaput affirmed. "Therefore it's vital for Catholics to understand how the media work, and especially how they work on us." "Most of what we know about the world comes from people we'll never meet and don't really understand," he explained. "We don't even think of them as individuals. Instead we usually talk about them in the collective -- as 'the media' or 'the press.' "Yet behind every Los Angeles Times editorial or Fox News broadcast are human beings with personal opinions and prejudices. These people select and frame the news. And when we read their newspaper articles or tune in their TV shows, we engage them in a kind of intellectual intimacy in the same way you're listening to me right now." Although he admits "this isn't necessarily a bad practice," one must be aware of who is behind the news. "We usually know very little about the person who writes an unsigned editorial or the people who create the nightly news," the archbishop said. "And that's worth talking about. Here's why. In an information society, the people who shape our information control the public conversation."
"The media's power to shape public thought is why it's so vital for the rest of us to understand their human element," . "When we don't recognize the personal chemistry of the men and women who bring us our news -- their cultural and political views, their economic pressures, their social ambitions -- then we fail the media by holding them to too low a standard. We also -- and much more importantly -- fail ourselves by neglecting to think and act as intelligent citizens."
With files from:
http://www.catholic.org/national/national_story.php?id=34051

EUROPE
In Liechtenstein a Sunday Sticker Album has been launced via www.sundaystickers.com.
Fr. Schwarx of Archdiocese of Vaduz explained that there will be an english version in print. This catechetical aid provides illustrations of the Gospel readings according to the Liturgical Calendar. It contains questions and answers about the Church and her teachings. This popular tool for evangelization helps teach children about the Mass.
With files from: http://www.kath.net/detail.php?id=20208 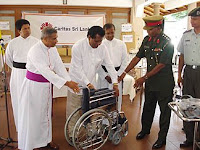 In Colombo(Sri Lanka), Civil war has left many citizens injured. Caritas has therefore decided to donate much needed medical equipment for these wounded.Bishop Perera said "When the Church addresses common issues, we don't consider caste or creed." He is the chairman of the Catholic National Commission for Justice, Peace and Human Development.
"We are providing humanitarian aid and the foundation (of our belief) is the teaching of Jesus Christ who said, 'Love your neighbor,'" said the prelate of Colombo's head office.
Father Fernando of Caritas said: "At present, we are feeding 57,000 displaced people living in camps," .
With files from http://www.ucanews.com/2009/07/14/caritas-aids-wounded-soldiers-after-the-war/
AFRICA
Brother Raffaele Rafiringa, born in Africa in Madagascar 1856, was declared "blessed". The ceremony took place on June 7 in Antananarivo by Archbishop Antonio Amato, prefect of the Congregation for Saints' Causes. He was a lay brother who helped priests in exile from 1883-86.
He was taught by French La Sallian missionaries who came to Antananarivo in 1866. He was baptised at the age of 14. According to a Vatican Radio interview a man who had been paralyzed from the waist down began to walk after praying at the brother's coffin when it was being displayed 14 years after his death in 1919.

With files from:
http://www.catholicnews.com/data/stories/cns/0902620.htm
THIS WEEK'S FEATURED PRIEST(for the Year of the Priest)
FATHER LEO RAMSPERGER 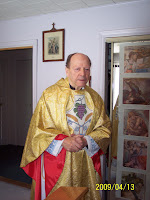 He was born in 1924 Toronto, Ontario, Canada. He was baptised in St. Vincent de Paul Church and attended this elementary School.
His parents were Arthur (German/Bavarian descent) & Christina(from Scotland). His mother was a convert from Presbyterian. They had 14 children. Father was the 5th child.
Before becoming a priest he worked 3 years in the airforce and worked at National steel cars. He studied in St. Augustine’s Seminary for 7 years. He attended seminary with Cardinal Ambrozic & the two used to cliff climb together. He was ordained in St. Michael's Cathedral in 1954 and retired 1997.
He became Associat Pastor for 8 parishes over a 15 year period.
He was a Pastor for 28 years in 4 parishes:
Holy martyrs of Japan, Bradford, ON.
St. Paul’s Basilica , Toronto, ON.
St. John’s Albion, ON
St. Cornelius, Caledon.
One of his favorite sayings: "It is wonderful if God always gives us a happy heart." 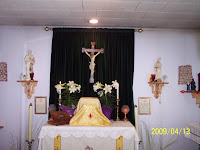