VATICAN : REFLECTION OF BENEDICT XVI PAPACY
AMERICA : RIP BISHOP AGUSTIN ROMAN AGE 82 - OF CUBA
AUSTRALIA : MILLION VIEWERS OF CARDINAL PELL CREATION DEBATE
AFRICA : TANZANIA : PRIEST KILLED TRYING TO STOP A FIGHT
ASIA : PAKISTAN : RIP CECIL CHAUDHRY HUMAN RIGHTS ACTIVIST
EUROPE : OPEN AIR MASS FOR PERSECUTED CHRISTIANS
TODAY'S MASS ONLINE : EASTER SATURDAY APRIL 14, 2012
TODAY'S SAINT : APRIL 14 : ST. TIBURTIUS, ST. VALERIAN AND ST. MAXIMUS
VATICAN : REFLECTION OF BENEDICT XVI PAPACY
RADIO VATICANA REPORT: 85 years of age and 7 years as Pope. When, already advanced in age, Card. Joseph Ratzinger was elected Pope many wondered if after years marked by the infirmity of his great predecessor, his papacy would be as strong and durable as hoped for, and whether a theologian who had led a specifically doctrinal Dicastery for such a long time would know how to undertake the very different task of the pastoral governance of the Universal Church.

In these seven years we have had 23 international trips to 23 countries and 26 different trips to Italy, we have witnessed four synods of bishops and three World Youth Days, we have read three encyclicals and received countless other addresses and magisterial acts, we have participated in a Pauline Year and a Year for Priests, we saw the Pope to face with courage, humility and determination - that is, with a clear evangelical spirit - difficult situations, like the crisis of sexual abuse. We read - something new and original – in his work on Jesus of Nazareth and his book-length interview "Light of the world." Above all, we have learned from the coherence and consistency of his teaching that the priority of his service to the Church and to humanity is to guide lives to God, the God who was made ​​known by Jesus Christ, that faith and reason help each other in seeking the truth and respond to the expectations and demands of each one of us and humanity as a whole, that the marginalisation of God and relativism are serious dangers of our time. We are immensely grateful for all this. And we are still journeying with him, towards the World Meeting of Families and the Middle East, towards the Synod on the New Evangelization and the Year of the faith. In the hands of God, serving God and his Church.
SOURCE: RADIO VATICANA BY : FR. LOMBARDI
Posted by JesusCaritasEst at 6:59 PM 0 comments

Bishop Agustin Roman, May 5, 1928-April 11, 2012
Retired Auxiliary Bishop AGUSTIN A. ROMAN, has died at the age of 83. On Wed. April 11, 2012, he suffered cardiac arrest at the Shrine of Our Lady of Charity he was pronounced dead at hospital a little while later. The Archdiocese of Miami made the announcement quoting Archbishop Wenski:
Archbishop Thomas Wenski stated, "The Archdiocese of Miami has lost a great evangelizer who tirelessly preached the Gospel to all. And the Cuban nation has lost a great patriot. Bishop Roman was the Felix Varela of our time."
Appointed auxiliary bishop of the Archdiocese of Miami in 1979, Bishop Román was the first Cuban to be appointed bishop in the U.S. He left Cuba in 1961 after being expelled by Fidel Castro's regime. Bishop Román came to Miami in 1966, where he founded the Shrine of Our Lady of Charity, Cuba's patroness. He oversaw its construction and remained active there even after retiring as its rector and as Miami auxiliary bishop, and up to the last days of his life.

An extensive biography of Bishop Román is available in English and Spanish - as well as a video. For up to the minute information, please visit www.miamiarch.org.

Bishop Román ministered in Chile for four years before coming to Miami in 1966, where he became identified, almost immediately, with the Shrine of Our Lady of Charity. His exhortations to fellow exiles to donate "kilos prietos" (tarnished pennies -- what little they could afford in those early days) over a seven-year period raised enough to pay for the construction of the Shrine on Biscayne Bay. Dedicated to Cuba's patroness, it has become a beacon for exiles from many nations, luring thousands of worshippers each year. After retirement, Bishop Román remained active at the Shrine, where he greeted visitors, taught catechesis, responded to letters from fellow Cuban exiles, answered the phone and heard confessions until the last day of his life.
(Edited from Archdiocese of Miami press release)
http://www.miamiarch.org/ip.asp?op=Agustin
Posted by JesusCaritasEst at 6:54 PM 0 comments 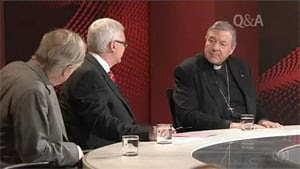 Richard Dawkins, Tony Jones
and Cardinal Pell on Q&A
Nearly a million viewers watched Monday's episode of Q&A, its highest ratings ever when Cardinal Pell and militant atheist, Professor Richard Dawkins met one another in a custom made debate, departing from the usual panel format.
With a packed studio audience and a large number of video questions sent from around Australia the topics for discussion were far reaching, covering everything from the big bang, evolution and life after death to gay marriage, social responsibility and human suffering.

Greg Sheridan, foreign editor from The Australian, noted that the debate with the huge attention it received "was an important event in Australian public life and it tells us several things" (Pell's Performance Was a Revelation, The Australian, pg 12, April 12, 2012). One of these is that "the new militant atheism represented by Dawkins and his countless local imitators, is a destructive force because it seeks to annihilate, or at least cut society off from, the great store of human knowledge, expertise and wisdom embodied in the Christian tradition."
Another is "what a remarkable, and internationally important figure Pell is". Sheridan says "he was a clear, self-confident, erudite but easily understandable spokesman for mainstream Australian Christianity".
At times during the debate, Dawkins appeared visibly upset with the audience. When Dawkins explained that the universe was created from nothing, but that nothing was actually a highly complex arrangement of something, laughter erupted. Annoyed, he quipped "Why is that funny?"
The Cardinal humorously said the trouble with Dawkins' teachings is that "he dumbs down God and soups up nothing".
The Cardinal said afterwards that it is always a difficult forum to debate such complex issues in a limited timeframe. There were certainly some areas he would have liked to develop further, however the moderator wanted to move on and cut many topics short.
He said he was comfortable that he made some extremely valid points, whether or not they were accepted by Richard Dawkins and his atheist followers. Overall, His Eminence found the evening an enjoyable experience.
With so many tuning in to a discussion about God and religion, it seems, Australia's appetite for the spiritual is not dead. As Greg Sheridan put it "we are less secular than we seem".
Posted by JesusCaritasEst at 6:38 PM 0 comments

Agenzia Fides REPORT - two young people were arrested by police in connection with the murder of Father Anastasius Nsherenguzi, a 43-year-old Catholic priest in the diocese of Kayanga (Tanzania), who was seriously injured on Friday, and died on Saturday, April 7, after several hours of agony without revealing any details about what had happened.
According to reports on behalf of the Daily News, Fr. Nsherenguzi, while returning from Bushangaro, the area of the parish where he had gone for a religious service, along the road he had come across some young men who were fighting. The priest immediately intervened to prevent the dispute from degenerating. But Fr. Nsherenguzi was hit in turn by a youth with a large rock, causing him fatal injuries. (L.M.) (Agenzia Fides 14/4/2012)
Posted by JesusCaritasEst at 6:34 PM 0 comments

ASIA NEWS REPORT:
by Jibran Khan
He succumbs after a long battle with cancer. His funeral is scheduled for tomorrow in Lahore's Sacred Heart Cathedral. The much-decorated Air Force pilot worked in education for 20 years on behalf of poor and disabled children. He was a close associate of the Shahbaz Bhatti.

Lahore (AsiaNews) - Pakistani Air Force ace and human rights activist Cecil Chaudhry has died. A Catholic, he was involved in education for poor and disabled children. A great friend and associate of Shahbaz Bhatti, Pakistan's Minority Affairs minister who was killed on 2 March 2011, the former military pilot passed away yesterday in Lahore after a long battle with cancer. His funeral will be held tomorrow in Lahore's Sacred Heart Cathedral.

Mgr Rufin Anthony, bishop of Rawalpindi, today said that Catholic schools would close across the diocese for ten days. Mgr Sebastian Shaw, bishop of Lahore, announced a five-day mourning period for Catholic schools in his diocese. Various human rights and civil society organisations expressed their condolences for the death of the "national hero".

Born on 27 August 1941 in a Roman Catholic family in Dalwal (Punjab), he studied at St Anthony's High School in Lahore. He completed his education at the Forman Christian College in the same city.

In 1958, he joined the Pakistan Air Force Academy. During his military career, he took part in dangerous missions during the 1971 Indian-Pakistan War and won two medals of valour.

He left the Air Force in 1986 with the rank of colonel and became a leading figure in the process of reconciliation between India and Pakistan. At the same time, he began to work on human rights and youth education.

Principal at the Saint Mary's Academy of Lalazar (Rawalpindi) and member of the Punjab Education Foundation, he became the executive secretary of the All Pakistan Minorities Alliance (APMA), an organisation founded by Shahbaz Bhatti in 1985.

Over the years, he worked with the slain minister, dedicating himself to school reforms for disabled children.

Chaudhry was also an active supporter of the National Commission for Justice and Peace. After 14 years, his campaign led to the restoration of Pakistan's joint electorate system in 2002.

Posted by JesusCaritasEst at 6:30 PM 0 comments


Posted by JesusCaritasEst at 6:28 PM 0 comments